Law and the Modern Mind: Consciousness and Responsibility in American Legal Culture (Review) 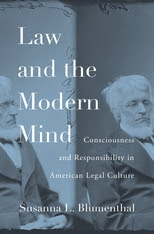 Liberal subjectivity and its complications loom throughout nineteenth-century cultural and intellectual history. Owing largely to Scottish Common Sense, American thinkers posited a normative, but putatively descriptive, account of the human subject. The person was rational, discrete, and agentive. However, as many historians have shown, these assumptions were frequently challenged, and many people clearly did not fit this model. Of course, one point of this model was to exclude certain subjects, such as women, African Americans, and Native Americans. But there were other exceptions too, some of which were understood as less fixed states, like the drunkard, the monomaniac, or the lunatic. Scholars of American religion have shown some interest in these politics of personhood, especially as they relate to Christian anthropology and the influence of Protestant thought of American political forms. Antebellum reformers, for instance, thought carefully about vice and social responsibility as they worked for temperance and against prostitution. Social gospel leaders, in different terms, considered the role of modernization and industrialization amid perceived social breakdowns. Religious figures from all positions on slavery employed ideas about morality and mental capacity to forge their theological justifications. Educators acknowledged the importance of cultivating morality and worked to instill it in public schoolchildren while navigating the politics of nonsectarianism. These are all familiar topics. Less common in American religious studies, though no less important, are mundane but meaningful legal issues like insurance, wills, torts, and divorce. It was here, Susanna Blumenthal argues in Law and the Modern Mind, that philosophical, legal, and medical discourses about personhood, consciousness, agency, and rationality had salience. Blumenthal’s brilliant study of “the default legal person” locates these high-minded and thorny questions—What is a person? Who is rational? What is insanity? Wait, isn’t everyone a little irrational sometimes?—in courtrooms throughout the nineteenth century.

What is the “default legal person”? Blumenthal’s term refers to the presumptions behind legal personhood. Enlightenment thinkers debated what “man” was, who counted as “civilized,” and so on. Practically, in a courtroom, when someone’s legal responsibility was in question, that someone had to be understood as a person. American jurists “presumed a mental baseline in the form of the default legal person who possessed a set of intellectual, moral, and volitional faculties that enabled him to follow the precepts of reason and natural justice, as well as those of the positive law” (9). This is a profound intellectual history, for it engages well-trodden themes and ideas in American history but incorporates a wide variety of sources (“an impressive array of ornate and largely arcane texts,” as Sarah Barringer Gordon’s blurb puts it) that is unfamiliar to most historians of nineteenth-century thought. “Mining literary and philosophical sources for the roots of major intellectual movements known under the signs of Pragmatism and Existentialism,” Blumenthal argues in her conclusion, “we have failed to notice the ways in which these problems were being considered every day in courthouses across the country” (290).

Law and the Modern Mind is divided into two parts. The first part, consisting of two chapters, lays out the intellectual framework with which nineteenth-century American jurists worked to understand personhood. The first chapter keys on the impact of Scottish Common Sense. American advocates of the philosophy understood men to be wholly rational creatures whose direct perceptions of the world were real and trustworthy. The world was actually quite simple and the truth apprehensible—for an intelligent and rational being. But, what if seemingly rational men understand the world differently? “Who was to decide when all consciences did not agree” (49)? Common Sense philosophers explained rejections of common sense in a few ways, but the two most basic were either that an individual was not sufficiently rational due to insufficient mental capacity (this was the case for most women and non-whites) or because of some moral deficiency. But what caused “moral derangement,” which Benjamin Rush defined as “that state of mind in which the passions act involuntarily through the instrumentality of the will” (59)? Various medical answers were offered throughout the nineteenth century, pinning the blame variously on sin, family turmoil, side-effects of capitalism, and unpreventable mental disease. Whether these medical or quasi-medical explanations were legally admissible was another question and, again, one with varying answers. In whatever case, “insanity” proved to be a difficult problem for American jurists, especially in cases that hinged on assigning responsibility to an individual.

The five-chapter second part, “The Mind in Issue,” uses a huge number of case studies to discover how jurists wrangled with the difficulties, contradictions, and lacunae left unresolved by their philosophical and legal frameworks. Through these hard cases, “common sense would lose the universality that came from its origin in Common Sense philosophy” (103). Jurists began to think that sanity was a spectrum, and they realized over and over how complicated and troubling it was to determine exactly where an individual falls. As Nicholas St. John Green, an interlocutor of Oliver Wendell Holmes, Jr. as a member of the famed Metaphysical Club, put it in 1871, “Between the highest and finest intellectual and the lowest maniac there are many gradations of infinitely complex modes of mental action. It must be impossible to draw any line upon one side of which shall lie the sane, and upon the other the insane” (288). But that was oftentimes exactly the task with which jurists were faced.

Blumenthal details a series of cases where the mind was at issue. Some of the most important cases, for the precedents they set and the amount of capital at stake, dealt with the estates of deceased wealthy men. Widows and children, miffed by their exclusion or under-compensation from their deceased loved one’s will, began in antebellum American to bring these cases to court, alleging that the will was made in a state of “unsound mind.” The evidence presented ranged from reports of mental delusions to monomanias (often regarding religion) to patently unreasonable choices for what to do with one’s money. In Chandler v. Ferris (1834), for example, a deceased Delaware man’s heirs alleged that he had been insane, as evidenced in part by his late-life obsession with abolition, which manifest in his decision to leave “his entire estate to a vocational school for ‘male children of the African race’” (126). If such acts signaled a delusion, though, perhaps a significant part of the population might be insane. One New Jersey judge wondered, “How many in the community would declare a millerite, or a mormon, or an abolitionist unsound in mind” (126)? In 1858, a Connecticut judge cautioned, along the same lines, “Were we to decide that men cannot make contracts nor dispose of their estates, however sensible and shrewd, because they fancy some things to exist which do not…What would be the condition of those who happened to have dealing with…a deceived and half crazy demagogue, a Hindoo worshipping an idol, a sincere and enthusiastic but deluded follower of Mahomet, or a modern spiritualist with his ‘harmonial philosophy’ and ‘aerial spheres’” (133)? In other words, believing things that weren’t true could not be sufficient to demonstrate insanity. But what about real lunatics? What about men seeking divorce from women so unstable they attempted to kill their child? Should a woman be granted a divorce from a husband in the grips of dementia and “second childhood,” or be all the more compelled to remain married and care for him? Who was responsible when a ship ran aground amid its captain’s temporary insanity due to three days without sleep? Could a rational citizen nullify a contract because it was made with a drunkard? What did a life insurance company owe to the family of a failed businessman who died by his own hand?

Law and the Modern Mind is a serious, thoughtful, and sobering book. But it is also fun to read. Blumenthal’s case studies are frequently zany and heartbreaking—and often both simultaneously. One chapter opens with the following sentence: “On November 17, 1843, a trader by the name of Dorr bought a large supply of ribbons for which he had no use at a price far in excess of their market value” (166). That is a good opening vignette! Dorr’s case, though colorful and undeniably funny, illustrates a serious point: “As long as speculation constituted the animating spirit of capitalism, insanity would be a problematic plea that could not easily be credited without threatening the security of economic transactions and raising troubling questions about the limits of accountability” (167). Blumenthal’s book is full of similar case studies and sharp analysis. It is a deeply rewarding work that should be read of course by historians of nineteenth-century law, but also by anyone with an interest in agency, capitalism, disability, the history of psychology and American thought, and, most basically, what it means to be a person.
Email Post
Labels: book reviews Charlie McCrary's posts religion and law religion and psychology