The following is a guest post from Baylor Ph.D. candidate Tim Grundmeier. Tim's dissertation will examine Lutheranism and American culture in the Civil War era. You can check out his previous posts at the blog here and here.

Over the last ten to fifteen years, religion has been one of the hottest sub-fields in Civil War-era history. (For a great, if slightly dated, summary of the literature, see this essay by Timothy Wesley.) Besides numerous excellent monographs and articles, we have been treated to a field-defining set of questions posed by one of the best scholars of American religion, a provocative trade-press book by a distinguished Yale professor, and a monumental synthesis by an eminent Civil War historian. The religious history of the Civil War can even claim an op-ed in The Atlantic. All that’s left is a best-selling historical novel (The Killer Theologians?).

Yet success is often followed by exhaustion. So as someone who is writing a dissertation in this field, I’m beginning to worry that the heyday of Civil War religious history might soon be over. If this denouement is indeed looming, in what new ways can the field move in order to sustain itself? Or if the field’s glory years still await, how can old questions be looked at in fresh ways so as to ensure this flourishing future? 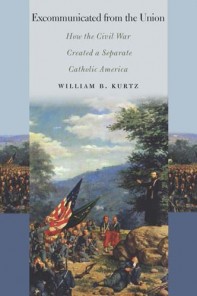 With these questions on my mind, William B. Kurtz’s Excommunicated from the Union: How the Civil War Created a Separate Catholic America (Fordham University Press, 2015) comes at an ideal time. Kurtz’s monograph not only takes its place as the most thorough treatment of Northern Catholicism and the war (the book is part of Fordham University Press’s series, The North’s Civil War), but also asks questions and utilizes approaches that other historians of Civil War-era religion would do well to note.

The first welcome feature of Excommunicated from the Union is its focus on the years before, during, and after the war. Such a compliment might seem trite, but books featuring this broader chronological outline have been surprisingly rare. This may be changing, however. Two of the best recent works in field—Molly Oshatz’s Slavery and Sin: The Fight against Slavery and the Rise of Liberal Protestantism and Luke Harlow’s Race, Religion, and the Making of Confederate Kentucky, 1830-1880—employ this longer framework. Like Oshatz and Harlow, Kurtz treats the Civil War as the turning point in a larger story. Contra the book’s subtitle, he does not argue that the Civil War created a separate Catholic America. Instead, it “accelerat[ed] the antebellum trend in American Catholicism toward isolation and separatism” (8; emphasis mine). This is not merely the story of Catholics in the Civil War, but the war’s effect on American Catholicism.

Kurtz begins by outlining the anxieties of U.S. Catholics already present during the Mexican-American War. Eager to prove themselves as loyal Americans, Catholics became dismayed as their military service went unrecognized and nativist Know-Nothings rose to prominence in American politics. The Civil War, many Northern Catholics thought, was a second chance to prove their Americanness. Most of the Catholic press initially supported the war effort and many laypeople, priests, and nuns enlisted as soldiers, chaplains, and volunteers. Debates over slavery, war fatigue, and Republican doubts about Catholic loyalty, however, weakened Catholics’ enthusiasm for the Union cause. Because of this, Kurtz writes, the Civil War “proved an alienating experience for many Catholic civilians” (128). During Reconstruction, this alienation proceeded apace. Though affairs in Europe—such as the declaration of papal infallibility and Italian unification—played a role, Kurtz argues that American events, such as the battle over public schools, “ultimately proved more important to the continued vitality of anti-Catholicism” (136). As he persuasively illustrates, many of these disputes were framed in terms of the war. Consequently, Northern Catholics focused on creating their own institution and constructing a separate wartime memory.

Kurtz’s conclusion points to a second aspect of the Civil War era that has been largely overlooked by religious historians: the importance of ethnocultural issues. Most research understandably has focused on the theological conflicts over slavery and race, the central moral questions of the era. But Northern Anglo-Protestants did not put their nativism on hold as the Union fought to end slavery. Indeed, as Kurtz persuasively demonstrates, the two issues were intertwined throughout the Civil War era.

Another understudied issue that Kurtz explores is the religious underpinnings of Copperheadism. As he demonstrates, anti-war Catholic Democrats were motivated not merely by racial animus but also by just-war doctrine, contempt for “Puritan fanaticism,” and fear of the loss of religious liberty. After finishing Kurtz’s work, I had to re-open Jennifer Weber’s excellent Copperheads: The Rise and Fall of Lincoln’s Opponents in the North. Sure enough, religion hardly comes into play in her analysis. To be sure, several works of Civil War religious history (Timothy Wesley’s The Politics of Faith during the Civil War in particular) have explored Northern opposition to the war. Yet Kurtz’s book underscores the need for a fuller treatment.

Of course, Kurtz’s fine work is worth reading not merely for the potential directions in research that it suggests. Besides shedding new light on familiar figures such as Orestes Brownson, John Hughes, and James McMaster, Kurtz introduces a cast of characters largely unfamiliar to many non-Catholic historians. For example, Mother Angela Gillespie was a cousin of William Tecumseh Sherman, but her Holy Cross nuns were still frequently barred from serving in Union hospitals. Kurtz also pays close attention German Catholics, often ignored for their more accessible Irish and native-born counterparts. He argues that this ethnic group experienced a “greater degree of separation from American society both before and after the war” (158) than their English-speaking co-religionists. Both in its suggestions for future paths of inquiry and as a historiographical contribution in its own right, Excommunicated from the Union confirms that Civil War-era religious history remains a viable and exciting field.
Email Post
Labels: book reviews catholicism guest posts new books religion and the civil war