Spotlight as Teaching Tool in the American History Classroom: A Lesson Plan 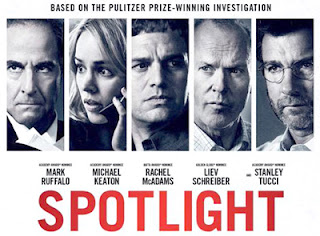 This past semester I had the opportunity to teach “American Religious History Since 1945” to undergraduate students at Boston College. The syllabus offered three forays into the twenty-first century: religion and 9/11, and the release of Pope Francis’ encyclical on global warming and, in the final two classes of the semester, the sex abuse crisis in the Catholic Church. Mid-semester a colleague informed me about the release of Spotlight, the film about The Boston Globe journalists who broke the story of abuse in the Archdiocese of Boston in 2002. I quickly made plans (and secured funds) for my class to see the film at a downtown Boston theater. Our final two classes would include a brief lecture, five short Boston Globe newspaper articles, a discussion, and a trip downtown to see the film. In this blog post, I share the lesson plan I assembled to use Spotlight as a teaching tool in the American History classroom.
To prepare students for the film, I gave a brief lecture on the sex abuse crisis, setting the 2002 revelations in a deeper chronology. The final chapter of Jim O’Toole’s The Faithful provides an initial overview of the crisis and introduces some important nuances. I found it important to stress that cases began to appear between 1985 and 1990 (in Louisiana and Massachusetts), but that initially such cases appeared as exceptions rather than a pattern. It might also be helpful to mention the financial figures behind the subsequent settlements with the victims. One could also allude to the laity’s reactions after the revelations: responses of shock, prayer, solidarity with fellow lay people, and departure from the Church. In my lecture, while trying to outline the events as precisely as possible, I stressed the need to continue researching the sex abuse crisis and to pay attention to new resources that will help our understanding.

The film itself makes several important points, useful in teaching and discussing the crisis. The film captures the contingency of the revelations. Stated another way – it helps viewers and students to understand why the sex abuse crisis broke in 2002. The historian has an obligation to focus on timing. The Globe’s interest in the sex abuse crisis stemmed – as the film portrays it – from the arrival of a new editor in July of 2001 who thought the paper’s readers would be interested to know more about sexual abuse in the Catholic Church. The film does a fine job of following the reporters who broke the scandal: it captures their efforts to track down documents, interview victims, consult existing scholarship, connect the dots, and navigate the local judicial system. Historians and their students can identify with this concern for evidence. Importantly, the film shows how reporters moved from a notion that they were researching a series of isolated incidents to the revelation that they had uncovered a broader institutional pattern. It then demonstrates the politics behind reporting such a story: the individuals approached by the Globe to own up to the stories before publication, the paper’s own failures to publish earlier accusations of abuse, decisions on when to publish the piece, how to fully support their claims, and how to deal with any fallout. With all of the suspense, twists and turns, Spotlight is a good film. The moral indignation of the reporters is palpable, but they remain true to the methodical tasks of research and reporting. Perhaps Spotlight will be listed among the best pressroom dramas. It might take its place alongside All The President’s Men and the fifth season of HBO’s The Wire.

Back in the classroom, I suggest assigning 5 newspaper articles for class discussion. The Boston Globe churned out over 600 pieces on the sex abuse crisis in 2002-2003 alone. You could select the articles from the initial pieces that broke the scandal to the public. I selected five articles published between 2003 and 2006 to give students a sense of how Boston Catholics – lay people and the hierarchy – might have responded to the revelations over time. I assigned an article from May 6, 2006 entitled “O’Malley Asks Forgiveness for Church Sins.”

The article described how: "Cardinal Sean P. O’Malley and 22 priests of the Archdiocese of Boson prostrated themselves on the altar of the Cathedral of the Holy Cross last night and asked forgiveness for the sins of the Catholic Church after hearing a survivor of clergy sexualabuse speak of his suffering … O’Malley and the other clergy then lay face down for about eight minutes before a crucifix taken from Assumption Parish in Bellingham, a now-closed church were a former associate pastor pleaded guilty last year to molesting the altar boys in his charge"

This article offered our class the chance to talk about the uses of ritual – one of the themes that had already emerged in our course during the semester – and to think about how historical subjects understand rituals to have unifying powers even in the face of immense tragedy. The article also contrasts the official efforts at repentance with the perspectives of a few survivors. One survivor spoke at the ceremony while others, not attending, offered  critiques. One survivor stood outside the church with a sign that read: “Dirty hands do not heal.”  Another told the Globe that “‘to ask us to go into a church is asking us to revisit the place where we were most hurt and harmed.’”  I had students read another article from 2006 detailing the dismissal of 8 priests and also articles on the initial settlements, the death of Fr. John Geoghan, and the release of an official report on the abuse.

Taken together, the lecture, film, and assigned readings can raise several discussion questions. It is first important to discuss how Spotlight portrayed the survivors. One thing to discuss is the class backgrounds of the survivors, as represented in the film. Survivors seem to come largely from working class Boston families. In the film they attempt to convey that religion means something different – perhaps something deeper – to working class families. The film can deepen students’ understandings of the ways class status shapes religious life. Another point of discussion might be how the survivors portrayed in Spotlight discussed the priests. Survivors had a deep reverence for priests, as individuals and mentors, before the abuse began. This provoked my students to discuss the history of the priesthood in American culture, inclusive of anticlerical moments and periods when priests were revered as unquestioned leaders of their communities. 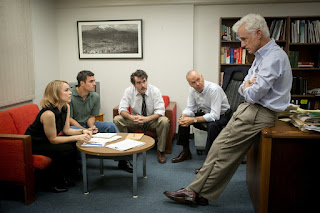 The film stokes a debate that American Catholic historians and their students have been having for years, in one way or another, about Catholic Church’s integration, or lack thereof, into American society. Catholics are sometimes portrayed in Spotlight to be clan-like, having their own institutions and ways of life separate from mainstream America. The journalists and editors fear, for example, that a Catholic judge will not declassify the legal documents the Globe needs to write and substantiate the initial articles. The lawyer who defends the survivors, as an Armenian, notes that he feels himself to be an outsider to Boston Catholic culture. Yet, Catholics are the quintessential Bostonians in Spotlight. They run some of the city’s major institutions. They support the Red Sox, the Bruins, and the Celtics. My class engaged the body of historical literature that argues for the Cold War as the moment when the identities of Catholic and American moved closer together.  Spotlight allows for a discussion about the limits of integration. The film provides an opportunity to interrogate the extent to which Catholics do and do not have a separate culture. The debate has implications for how we will interpret the efforts to mute or sidestep publicizing the sex abuse crisis.

One of my students told me: “it was important that we saw this film.” Others struggled, understandably, to have a dispassionate conversation about the questions raised by the film and the articles. Another student – a major in psychology – expressed interest in how psychologists were represented in the film. Our class could not settle the many questions raised by Spotlight and The Boston Globe articles, but we agreed that it was important to keep the conversation going. The sex abuse crisis needs to be discussed and analyzed in the history classroom. Historians and their students working in the areas of law, the city, gender, sexuality, childhood, religion, and journalism will find Spotlight to be a helpful teaching tool. I hope this blog post makes a small contribution to that conversation.

Unknown said…
An excellent way to discuss this never ending 'cancer' in our church. I grew up in the 1940/50s and my family were closely associated with Priests and a few Bishops in Ireland . Sadly I am no longer shocked by the type of revelation in the film and glad to say I still number a lot of Priests and at least one Bishop as my friends. I have posed this one and only question, how did these people who welded such authority stand idly by while children were being abused so horribly?. They do not have any answers apart from stock reply of 'different times'but as recent cases have shown in Ireland especially,this was still going on as late as 2012 and it was across all spectrum's of society Health,Social Service Police even Paramilitaries ...Omerta