“Only the ways of space”: Benjamin Zeller’s Heaven’s Gate and UFO Religion

Lately, maybe because I have a paper deadline soon, I have been thinking a lot about “New Religious Movements.” Among the tens of library books I have checked-out and pretended to read, nearly all reference UFO religions, but few give sustained looks at these movements. If ancient aliens has taught us anything, which (spoiler alert: it has) it is Americans love a good UFO conspiracy theory. Except when they don't. Except when groups invested in UFO theories enter the realm of the "cult." Perhaps the most famous group, at least of late, to be accused of being a cult, is Heaven's Gate, a group that while popular in NRM books, has received less analysis in many circles. Enter Benjamin E. Zeller’s Heaven’s Gate: Americas UFO Religion (New York Press, 2014), the first, and only, book-length treatment of the Heaven’s Gate movement. 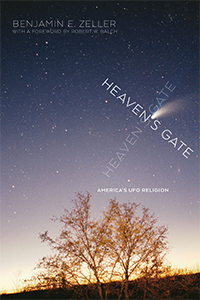 Zeller’s work is equal parts excellent history of the movement and just as useful analysis of Heavens’ Gate. In short, he argues that Heavens’ Gate, mostly famous for it’s abrupt end, reflects larger currents of American religion as a combination of American Christianity and New Age movements. Likewise, he maintains that Heaven’s Gate reflected American society and that its members practices, beliefs, and ultimate move to the “Next Level” must be understood not within brainwashing or cult language, but instead as part of the triangulation of at least the theosophical tradition, New Age spiritual seeking, and “apocalyptic-oriented Christianity.” This work reflects larger trends in American Religious studies to treat New Religious Movements as barometers of “acceptable” religious behavior. Instead of seeing Heaven’s Gate as “just a suicide cult” then, Zeller rightfully argues that Heaven’s Gate is “America’s UFO religion.”

Zeller begins his narrative chronologically moving from the pre-Heaven’s Gate (a name only adopted near their move to the Next Level) origins found in the meeting and subsequent relationship of Marshall Herff Applewhite (almost always pictured the with the same screen grab) and Bonnie Lu Nettles. As Zeller argues, what “began as two individuals, blossomed into a socially diffuse collective of spiritual seekers, and finally coalesced into a distinct religious movement.” While questioning, at some points more effectively than others, Applewhite’s and Nettles’ earlier life commitments to Christianity, Zeller finds that both leaders of the movement used Christian backgrounds to attract some followers alongside quite a few detractors.

In attempting to answer why people joined Heaven’s Gate, Zeller runs into the predictable problem of how to deal with the language of cults and brainwashing. Here, Zeller builds on the works of Hugh Urban, Sean McCloud, and David Chidester as he interrogates popular associations of these categories in the main chapters of his work. He traces out, often in close detail, the worldview, theology, and religious practices in Heaven’s Gate. He notes that while Applewhite and Nettles were “puritanical” in requiring members to give up “sex, drugs, alcohol, and recreation” they exerted little other control and made few demands of their followers. Indeed, much of Applewhite and Nettles’ early evangelization was centered around the goal of assembling a “crew” that could travel to a higher evolutionary kingdom.

Zeller repeatedly notes the mundane happenings of Heaven’s Gate to compare them to other apocalyptic groups in American religious history and to combat anti-cult renderings of the community. He writes, “Brainwashing as a rhetorical tool...functions as a powerful tool in assuaging public anxieties over the legitimacy of new religions by effectively limiting the need to take them seriously. In the case of Heaven’s Gate this need was particularly acute, since religious suicide is deeply threatening to the social order.” Further, following J. Gordon Melton, he argues, “Brainwashing also functions as a ready-made explanation for family and friends of those who joined the group, excusing their actions on the grounds that they were not really in control of themselves.” Instead of brainwashing rhetoric, then, Zeller places Heaven’s Gate alongside other Christian dispensationalists and UFO religions, while working to make sense of how members of Heaven’s Gate employed an “extraterrestrial biblical hermeneutics” marked by the fundamental assumptions that alien life exists on other planets, a that alien life has interacted with Earth, and that aliens will again return to Earth in the future.

Towards the end of his work, Zeller emphasizes that a large part of Heaven's Gate theology was a rejection of the body outright. Between castrations, the adoption of new names, and even selecting to move to the Next Level in clothing specifically chosen for its connection to the television series Star Trek, the members of Heaven’s Gate emphasized self-transformation as the central tenet of salvation. 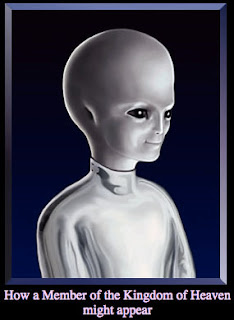 Indeed, well before March 22-23, 1997, Applewhite purposefully did not use the word “suicide” in his writings or videos. He even wrote that the “true meaning of “suicide” is to turn against the Next Level when it is being offered.” As Zeller notes, “True suicide, members believed, meant staying behind on a doomed Earth rather than joining the Two in the Next Level.” In any case, by 1997, Applewhite and his “students” realized that their bodies, now mostly referred to as vehicles, were going to be “recycled” on planet Earth, and that they must immediately evacuate. In two videos titled “Last Chance to Evacuate Earth Before It’s Recycled” and “Your Only Chance to Survive – Leave With Us”, Applewhite repeatedly uses these key words, which Zeller argues fits within the groups’ larger teachings about the Next Level and overcoming the human body.

While the majority of the group left Earth in 1997, several members of the movement stayed behind. And, Heaven’s Gate website is still online with a flashing “RED ALERT” at the top of the homepage along with links to many of Applewhite’s last writings. Likewise, while unsurprisingly, titled “Heaven’s Gate Cult Initiation” tapes, Applewhite’s last recorded statements for more people to evacuate the earth can be found online. Therefore, in arguing that Heaven’s Gate fits within other studies of New Religious Movements, and American religious history more broadly, Zeller’s contribution is both fitting and welcome. As he argues, Heaven’s Gate was embedded within American culture, and like many Americans, it’s members “believed in UFOs, extraterrestrials, and superhuman intelligence. They merely fused those beliefs with their religious ones. Heaven’s Gate was, in this sense, a UFO religion. But it was a particular kind. It was America’s UFO religion.”
Email Post
Labels: Andy McKee's posts book reviews new age new religious movements UFOs

Unknown said…
Incidentally, I too have been thinking a lot about UFOs, so you are not alone (pun intended). Re-watching The X-Files on Netflix. Big 90s hit. Was there something about the 90s that precipitated interest in the outerwordly, extraordinary? Maybe Hubble? Some pop physics thing I'm not aware of?
February 4, 2016 at 6:05 PM

Unknown said…
Agent Mulder just reminded me of NASA's SETI (Search for Extraterrestrial Intelligence) programs in the 90s. Particularly the Microwave Observing Program in 1992, which looked to nearby stars for, well, evidence...
February 4, 2016 at 7:25 PM