The deadline is fast approaching for panel proposals for the Society of U. S. Intellectual History's Eighth Annual Conference at Stanford, Oct. 13-15th.  Recent S-USIH conferences have spotlighted excellent work in the field of American religion, and Stanford will be no different.  The roundtable on Puritan studies--featuring David Hollinger, David Hall, Sara Rivett, Chris Beneke, and Mark Peterson--will itself be worth the price of admission.  You can find out more about the conference details and how to submit a panel proposal here.  Below is an overview of the plenaries and keynote address. 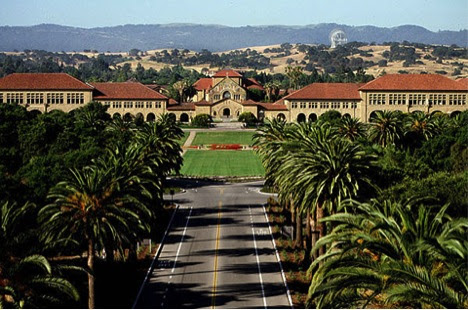 From the Mayflower to Silicon Valley: Tools and Traditions in
American Intellectual History
October 13-15, 2016

Submissions are now being accepted for S-USIH’s eighth annual conference! The committee will be accepting full panel proposals only until March 1, 2016. The committee is especially eager to ensure ethnic, gender and institutional diversity at the conference. We welcome the participation of graduate students, independent scholars, and all faculty ranks.

Proposals may be for traditional paper sessions, roundtable format with audience comment, workshop/seminar-style discussions, “author meets critics” events, retrospectives on significant works or thinkers, or other formats that encourage the exchange of ideas.

Panels which take up our theme of “tools and traditions” in American intellectual history are encouraged, as are panels engaging the following topics, periods and methods:

Spanning four centuries of American thought from the Puritans to the current technological and political culture, the conference will provide opportunities to consider historiographical trends and new areas of study. Four plenary sessions will anchor an exciting program of panels, roundtables and networking opportunities.

In his opening keynote address, “Network Celebrity: Entrepreneurship and the New Public Intellectuals,” Fred Turner will bring us his take on technology, Silicon Valley, and intellectual history, asking us to seriously consider the engineer as an intellectual force. Turner is Associate Professor in the Department of Communication at Stanford University, author of The Democratic Surround: Multimedia and American Liberalism from World War II to the Psychedelic Sixties (Chicago, 2013), From Counterculture to Cyberculture: Stewart Brand, The Whole Earth Network, and the Rise of Digital Utopianism (Chicago, 2008), and Echoes of Combat: The Vietnam War in American Memory(Anchor/Doubleday 1996).

On Friday evening, after a opening day of conference sessions, Caroline Winterer, Stanford Professor of History and Director of the Stanford Humanities Center, will moderate a dinnertime roundtable on “The Many Faces of Gender in American Thought: Considering Our Methods.” At a time when ideas about gender and sexuality are undergoing rapid cultural change, intellectual historians are pressed to consider how implicit conceptions of the feminine and the masculine have provided a significant foundation and structure to American thought. This plenary panel will address fundamental questions including: Is gender a useful category of analysis in intellectual history? How does such analysis change our understanding of ideas such as citizenship, justice, the common good, and the market? In what particular ways does the gendered subject receive, construct, and engage with ideas? The panel will address not only the recognition of gendered subjects, often invisible in historiography, but also how gender as an analytical tool changes the way historians read texts, the questions they ask and the conclusions they arrive in their analysis of American thought.

During a Saturday lunchtime plenary, David Hollinger, Preston Hotchkis Professor Emeritus of History, U.C. Berkeley, will direct a roundtable discussion “Whither Puritanism? Reflections on the State of the Field.” Puritanism long occupied a paramount place in American self-conceptions, beginning with early New Englanders’ exalted sense of their “errand into the wilderness,” a legacy reclaimed by proponents and critics of Americans’ distinctive mission and national character. In recent decades, many historians have distanced themselves from both the privileged position once accorded to colonial New England and the allied notions of American exceptionalism that had conferred transcendent importance on the Puritan tradition in earlier scholarship. Yet, Puritanism remains essential to the revitalized study of American religious history; and Puritans appear as central subjects in a wide range of recent studies of the family, gender, and sexuality in early America, of credit, commerce, and market culture, of empire, war, and native peoples, of science, medicine, and the body. If Puritanism no longer figures as the Genesis of American history, in what ways does it still have a special claim on scholars of American thought and culture? This plenary panel will reflect on the changed place of Puritanism, broadly conceived, in the past, present, and future of American intellectual history.

Closing out two days of rigorous conferencing, David Greenberg will reflect on the election year in “A History of Presidential Spin,” addressing how intellectuals, politicians, and the media have shaped the practice of presidential spin. Greenberg is Associate Professor of History and Journalism & Media Studies at Rutgers University and author ofNixon’s Shadow: The History of an Image (W.W. Norton, 2003), Calvin Coolidge (Henry Holt, 2006), and Presidential Doodles (Basic Books, 2006).
Email Post
Labels: cfp conferences Puritans