The Alliance of Baptists: An Interview with Andrew Gardner

Small denominations and institutions always have been a part of American religious life. However, many of these organizations fall through historiographical cracks. Denominational history is less common in our field than it once was, but there is much to be gained by focusing on institutions large and small. These histories contain fine-grain details and compelling stories that not only serve as valuable sources for other scholars but can point to larger trends, movements, and issues. Reimagining Zion: A History of the Alliance of Baptists (Nurturing Faith, 2015) is one such book. Today we have an interview with author, my friend and colleague Andrew Gardner, a PhD student at Florida State. 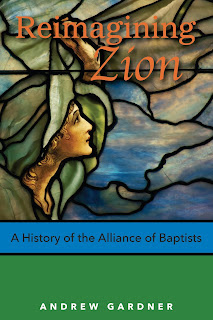 Thanks for doing this interview and telling people about this book. First of all, who are the Alliance of Baptists?

The Alliance of Baptists is a small Baptist organization founded as the Southern Baptist Alliance in 1987 in response to conflict within the Southern Baptist Convention (SBC). This denominational group of fewer than 200 congregations was the first to break away from the SBC. Over the course of its history, the Alliance of Baptists has developed an identity that continues to seek to shed its former denominational affiliation while at the same time re-interpret that Baptist tradition. Adherents have reinterpreted ideas of evangelism and missiology in terms of justice and partnership as can be seen through the group’s long-standing partnerships with La Fraternidad de Iglesia Bautista de Cuba (The Fraternity of Baptists in Cuba) and other ministry organizations globally and nationally. The Alliance has also been a longtime advocate of female ministers and the rights of individuals identifying as Gay, Lesbian, Bisexual, and Transgender. These characteristics among others help define the Alliance of Baptist as a liberal protestant tradition with a Baptist tinge.

What does the Alliance of Baptists tell us about the history of Baptists, evangelicals, and American religions more broadly?

Were there any models that you followed, especially in terms of how to write a denominational history?

There was a lot of trial and error, and in reality, I should have spent a longer time thinking about this question. Robert G. Trobet’s A History of the Baptists (1973), William Brackney’s Baptists in North America (2006), and H. Leon McBeth’s The Baptist Heritage (1987) were all too totalizing in their approach to denominational history. The Alliance of Baptists is a small organization with less than a thirty-year history; I felt that I could too easily get bogged down in a large chronological narrative. Bill Leonard’s Baptists in America (2005) was a little more helpful because of its more topical approach. In terms of thinking about this project, organization was key. Even so, I recognized that there was not a one-size-fits-all approach for denominational history.

In the end, I choose to divide the work into three sections with three ways of presenting the denomination’s history and identity. Section one is a summative and chronological narrative that offers a brief history of Baptists to a history of Southern Baptist Conflict to a history of the Alliance of Baptists itself. Section two is more topical in nature. The final section offers eight short, ethnographic pieces on congregations and specifically Sunday morning services within Alliance congregations from various states from New York to Georgia to California and more. In essence, the sections get progressively more focused. My goal was to make the history as accessible and useful to as wide an audience as I could — from laity to clergy to scholars. I am curious to see how people respond, and whether I was successful in this approach or I bit off more than I could chew.

Do you have any favorite anecdotes from the book you’d like to share?
There are a number of interesting stories across that are sprinkled throughout the work. I find some of the Alliance's partnerships particularly interesting. The Alliance’s long-standing partnership with the Fraternity of Baptists in Cuba sparked a commitment within the organization to petition the United States of America’s travel restrictions to and embargo on the Caribbean Island. Because of this larger denominational partnership, numerous Alliance congregations in the United States have partnerships with Cuban congregations. These partnerships entail visits from Cuba to the United States and vice versa, and they under-gird a particular type of missiology that seeks to correct colonialist ideas of “Missions” with a greater sense of equity in the relationship. Pullen Memorial Baptist church in Raleigh, North Carolina has maintained a partnership the First Baptist Church of Matanzas, Cuba since the early 1990s.

How did this project come about?

This project served as my “Third Year Project” at Wake Forest University’s School of Divinity as I finished my Master of Divinity. Paula Dempsey, the current Director of Partnership Relations for the Alliance of Baptists, asked me in February of my second year if I would be interested in working on the project. I later found out that a founder of the organization, Alan Neely, had worked on a history prior to his death in 2003. In the hospital, Neely made another Alliance founder, Mahan Siler, promise to have the history written. I happened to be the master’s student naïve enough to take on the task. The project was an extraordinarily insightful process.

Thanks, Andrew, for this fascinating interview. I look forward to reading the book, and I hope some of our readers will go pick up a copy!
Email Post
Labels: author interviews baptists Charlie McCrary's posts evangelcalism liberal Protestantism new books southern baptist convention