In the Beginning There Were No Indians, Africans, or Europeans...

Or, What African American Studies Teaches Me About Religion in America

Where to begin, where to begin... This semester I am teaching Religion in America (RELS 250 here at CofC) for the first time, if you can believe it. Up to this point it was the class I'd thought most about how to teach but had never actually taught. No longer! Now I'm wrestling in realtime with the dilemmas many of us share on the daily. What must I include? What can I cut? Where (oh, where!) do I begin?

Unsurprising to most (who read this blog), I began with requisite hand-wringing. What is the "religion" in American religion? What, where, and who is the "America" in religion in America? These questions are crucial for me. In a sense, these questions are what my course is about. I like opening all my classes on this meta-level, challenging students to challenge themselves (and the world around them) about what they assume they already know. Whether its a 101 intro or a 200-level African American religions survey, one of my universal objectives is for us to wrestle with the fraught history of words that might appear, at first glance, to be neutral, even innocuous: "religion," "nation," "race," "America."

The trick is how to get this to stick.
Conceptual introductions are fun and I've found students eager to engage them. But at a certain point one must presumably talk about Puritans - at some point one inevitably moves from the conceptual to content. And I've found that while students enjoy conceptual exercises, they have no trouble falling back into more commonsense conceptions. Who could blame them (or us)? After all, they've been engrained in us since birth. As someone relatively new to the teaching business, I continue to wrestle with how to integrate bigger conceptual conversations into the content conversations.

I had all this in mind when RELS 250 shifted from "Part I: Theoretical Frameworks" to "Part II: Religion in Colonial America." I wanted to start at the very beginning (which, as it turns out, is a very good place to start). So, for our class, religion in America began with encounters between three peoples in the 15th and 16th centuries: Native Americans, Africans, and Europeans. An innocuous enough starting point nowadays, I imagine. But having named these three groups of people, I called on us to pause. What do these words mean today? It was such a commonsensical question that it took a little coaxing to get students to say out loud "Well, they just mean people from particular places: America, Africa, Europe." With a little more coaxing they added "They're racial categories." 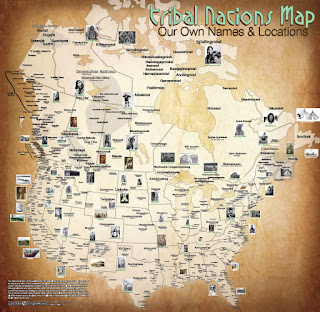 Our next step came courtesy of the Internets. I pulled up some (now famous) maps: a map of native tribal nations prior to colonial contact, a map of the empires of Africa before colonialism. It took mere seconds for students to marvel at what seemed to be innumerable different nations native to North America prior to contact. It didn't take that much longer for them to wonder whether the Pueblo nations of the Mesa Verde might have been almost as foreign to the Stono people of the Atlantic lowcountry as the others arriving from across the Atlantic. What, then, was a "Native American" at this moment of first contact?

This is when Inigo Montoya came into the classroom: "You keep using that word. I do not think it means what you think it means." Though my first inclination was to say that religion in America begins with Native Americans, Africans, and Europeans, instead I scribbled on the board "In the beginning there were no Indians, Africans, or Europeans..." We spent the rest of the class talking about how, prior to contact and European colonialism, you had tribes and nations across the Americas, you had communities and empires south of the Sahara, you had (first Christendom and then) warring Protestant and Catholic states. However, "Native Americans," "Africans," and "Europeans" - as we understand those words today, as neutral descriptors for people from particular places - were nowhere to be found. In other words, our first "content" day was the same day we discussed the modern construction of "race" in the context of colonialism.

And this is where the secondary title to this post comes in. This is one of the (many) lessons African American Studies teaches me about religion in America.* Taking the contributions of critical race theory seriously in the teaching, for instance, means more than starting our story in different places with different people - i.e. more than adding Indians and Africans into the mix. More than diversifying our cast of characters, African American Studies challenges us to attempt to shift the paradigm itself, to tell an altogether different story. Why is this important? What does it accomplish? Well, for one, it allows us to view the workings of power (and violence) not only at the very beginning, but also at the very heart of our constitutive terms themselves. When we begin to consider how and why it is that people who spoke a plethora of different languages, hailed from a variety of different places, and practiced a whole host of different traditions all came to be understood as (and eventually think of themselves as) "African," we soon realize we're telling a story many students are unaccustomed to hearing. It is a story that begins not just on the deck of the Arbella, but also with those enslaved in the bowels of "the good ship Jesus" - one in which pluralism is indecipherable apart from slavery, one in which encounters with difference lead not to diversity but to its destruction. 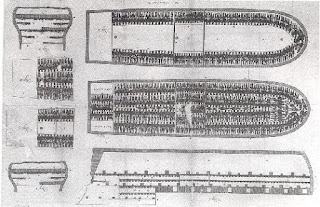 * Note: African American Studies is, of course, not the only discipline that does this work. I could write an analogous post on Women and Gender Studies, for instance. And there are a number of Religious Studies scholars doing this work as well. RELS 250, for instance, engaged these issues at the intersection of Religious Studies and American Indian Studies courtesy Joel Martin's essay "Indians, Contact, and Colonialism in the Deep South: Themes for a Postcolonial History of American Religion" (collected in Thomas Tweed's Retelling U.S. Religious History). It had been a while since I'd read Martin's brilliant essay. I cannot recommend it highly enough!
Email Post
Labels: african american religion colonialism Matthew's posts native americans Puritans race and religion religion and slavery teaching

Unknown said…
Great post, Matt. I always like reading about your classes. I've also long been avoiding (not intentionally!) the Religion in America survey, but when I finally teach it, I'm coming right back here to poach your ideas.

I try to make a similar semantic point when I teach my Christianity survey, for which I use Chidester's Christianity: A Global History. He has a great passage on categories like the superstition and magic and, of course, religion. And he says that the plural -- "religions" -- does not enter the English language until the 1590s. I always bring this up in class, asking my students what, then, "religion" might have meant leading up to that point. And then I ask, once we have "religions" -- plural -- what they think that meant. And, pace Chidester, it refers only to two religions: Protestant and Catholic. So what about all the other things we call religions? Inevitably, 1/3 of the class's minds are blown (the rest are sleeping or checking their twitters/facebooks/RiAH blogs). But it's always a fun class.
January 31, 2016 at 8:54 AM

Matthew Cressler said…
You're kind, Anthony. It'll be mutual - you poach this one and I'll come back for your religion/s and Christianity exercise. What a great way to get students to grapple with the constructedness of religion! And wow, if I could assure my students were checking the RiAH blog in class, I might just allow laptops.
January 31, 2016 at 12:08 PM

Thomas S. Bremer said…
Matt, this is a thoughtful reflection on the difficulties of introducing critical perspectives in the American religious history survey course. When trying to figure out how to integrate historical materials with theoretical problematizing for my textbook on American religious history, Formed From This Soil, I struggled with many of the same issues. I settled on beginning with an introduction that questions both the terms “religion” and “America,” and then return to these unstable terms throughout the book as it introduces new theoretical concepts in every chapter; rather than moving from concept to content at the beginning of the course, the book introduces and reintroduces the conceptual embedded in the narrative content, from fifteenth-century Africa to twenty-first-century globalization. Race, ethnicity, contact zones and transculturation, gender, sexual orientation, socio-economic class, authority, voice, pluralism, civil religion, nativism, orientalism, syncretism, class, spirituality, and other conceptual themes are highlighted in boxes throughout the book, all while pointing back to the initial interrogation of the overarching concepts “religion” and “America.” In addition, given my conviction that the narrative of diversity is not about adding color to a worn-out story of Protestant Christians coming to America, the book views the Americas as a place of intercultural encounter between peoples originating from the Americas, Africa, Europe, and Asia (other places too, but these are central to the structure of the story), and these different people are included, or at least mentioned, in every chapter (well, people from Asia do not appear until the nineteenth-century, but then they are in every subsequent chapter). Who we include and how we keep them in the story seems to me at least as important to teaching a critical history of religion in America as how we problematize the theoretical concepts we apply in our interpretations of that history.
February 3, 2016 at 10:03 PM

Matthew Cressler said…
Thank you for sharing this, Thomas. It sounds like your textbook is a great big step in the direction I'm trying to take! I'm definitely going to have to check it out. Love the idea of constantly calling attention to the conceptual in the midst of content. Well done!
February 8, 2016 at 1:50 PM