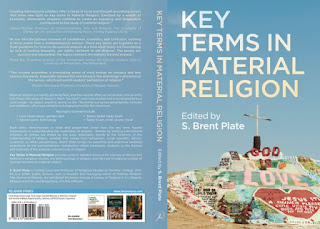 On December 17 (ten days from today), Bloomsbury Academic will be releasing Key Terms in Material Religion, edited by S. Brent Plate. The title is currently available for pre-order at your local independent bookseller!

SKM: Professor Brent Plate, thank you for agreeing to be interviewed here on Religion in American History (and thank you for commenting on some of my other posts.) It is great to get this chance to get to know you and your work. This is the first time that I, in this interview series, have spoken with the editor of an edited volume and so I wanted to concentrate on that process for some of the interview. Let me start with what seems like the most basic question: what led you to see a need for a “key terms” book for the study of material religion?

SBP: Thanks for agreeing to discuss an edited volume. I’ve spent a sizable amount of my professional life editing, and I continue to find it a rewarding experience. It really allows for some great collegial connections, something that I miss often when I’m writing my own work.

As for the specifics of this volume, the initial answer is that after several years of editing the journal Material Religion my fellow editors (Crispin Paine, David Morgan, and Birgit Meyer) and I realized that this field of study has really congealed into something strong and influential. Without setting too strict limits on what “material religion” means, we wanted to supply students and teachers with a range of inroads to this way of research.

Key Terms in Material Religion really began in an editors’ meeting at Duke University several years ago. Crispin, David, Birgit, and I were thinking about potential special issues for the journal and hit on the idea of doing a special issue as a “key terms” issue. So we commissioned 19 short articles on key terms, and published that as our March, 2011 issue. The response to the issue was great, and it warranted further work. With the agreement of my co-editors, I took the initial articles, asked authors to rewrite a little (some did, some didn’t), and then I doubled the size, commissioning another 18 articles for the book, and writing up an introduction. The result is a 37 entry volume (it’s quite an editing challenge to wrangle three dozen academics!).

SKM: When you sat down to draft a list of key terms, what served as your guiding principle?

SBP: There was no single principle, but rather a set of interrelated principles. On one hand, I wanted to review much of the literature in material religion (through the journal and elsewhere) and see what terms came to the surface. So, the body, the senses, memory, things/objects, media, and icons were all fairly obvious choices. On the other hand, I applied my editorial prerogative and included some terms that haven’t had as much attention in the past but by including them I hope they might promote future work in the field. Here I would include key terms like gender and race which unfortunately haven’t had as much prominence in material religion studies, even though I’d say it’s impossible to discuss these crucial areas of identity without their materiality. Also, the sense of vision has dominated much of the academic research in material religion (including my own), but many of us have been seeing how taste, smell, sound, and touch are vital to religious life, so it was essential to include these. Finally, there is another set of terms that are deep in the history of the academic study of religion, but are here rethought through the lens of material religion. Those include magic, belief, sacred, fetish, aesthetics, and spirit.

With that said, my aim was also one of diversity. I tried to get a diversity of examples from around the world, a diversity of religious traditions represented, written by scholars working in various fields and various places. (Unfortunately, this only includes scholars working in the English language.) There’s no perfect balance, but contributors come from fields of museum studies, art history, cultural anthropology, sociology, media studies, as well as religions in the Americas, Asian religions, African religions, and European religions.

SKM: Obviously, there are more terms than could be included here. Was there a logic to what ended up in the book and what did not?

SBP: Yes, it could always have been otherwise. As anyone who’s edited a book knows, a lot of the process is punctuated like that interruption to a television show, “Due to technical difficulties beyond our control, we cannot bring you tonight’s episode of Happy Days.“ Many logistical, professional, and sometimes personal limitations affect the final product.

The reality of this project is that the selection depended on the gelling of three things: a useful key term, a prominent scholar who could write on that critically and creatively, and do it in the space and time allotted. We academics tend to believe we live a life of the mind, but our thinking is always constrained by material realities including the publishing industry, the technologies of publication, and time itself. We may have the Platonic form of the ideal book in our mind when we set out, but scholarship is always shaped by material structures.

SKM: Without asking you to get into the nitty gritty of this person versus that person, how did you select the authors for the various terms? Did you go from term to author or author to term?

SBP: It was a bit back and forth from author to term/ term to author. The terms were important, but it was also important to include notable, internationally recognized scholars. Contributors include former AAR presidents, chairs of prominent departments and research centers, and authors of many award-winning books.

SKM: All of the essays have a similar structure, being relatively brief, and focused on a case study. What are the strengths of that format?

SBP: Yeah, there’s a real sense of this being a “sampler,” which can be a negative thing in academia, but I’d argue there are important uses of brevity and sampling. For one, our contemporary culture is immersed in the short form, from 140-character tweets to Oxford University Press’s “Very Short Introductions.” Information is spread out, and sometimes thin, which I do not believe to be a bad thing. (“Depth” and “length” have their own problematic ideological histories.)

I had the classroom in mind as I edited the volume, and while it’s not a standard structured “textbook,” I think a lot of creative instructors can make use of it. It is modular, adaptable, and can fit in with a variety of ways of teaching not only “material religion,” but “methods and theories” and even “introduction to religion” courses.

With that in mind, I asked authors to keep to <2500 words, and use a case study as a touchstone. Compared to a typical academic essay these are short, but you can do a lot with 2500 words, and I’m thrilled with how much is packed into these pieces.

SKM: Are there limitations to the case study approach?

SBP: All approaches have limitations, and as hinted at above the brevity may be one. Many will read and want more. But they’re in luck! There is much more out there on all these topics, and bibliographies can lead in the proper directions. In fact, many of the contributors have written entire books on the topics.

The other limitation may be in the minds of the readers, and that is our sometimes academic myopia in not being able to think analogously. For example, one might read Ivan Gaskell’s creative piece on “Display” that looks at a curious convergence of displays in and around Trafalgar Square, London, but not be able to imagine how that story relates to anything in their own space and time. Or, a look at the mapping project in Mumbai that Anita Patil-Deshmukh writes about in the entry “Maps” might suffer because readers don’t see relations to their own city streets. In fact the specifics of these case studies have relevance across distances, not only for seeing similarities, but differences as well.

SKM: One thing that people may not realize (in part because it is not really reflected in the price) is that each case study as a full color image--an important material dimension, but one that continues to emphasize the role of the visual in material culture studies.

SBP: One thought experiment I always pose to my students is this: Imagine that the sense of smell, instead of vision, was the primary sensual mode in modern western society. Would we have invented olfactory recording and observing devices instead of optical cameras and microscopes? What if the Internet were not so doggedly audio-visual, but included scents, linked through some sort of portable, handheld smellometers that would clue us into our surroundings, records scents and plays them back for future reference? (Such devices do exist, by the way, they’re just not popular.) The experiment goes a step further to ask: Or was it the cameras and microscopes that made vision the primary sense of modernity?

So, yes, the material realities of modern academic publishing are in themselves constructed around vision (reading books is the most acutely visual activity humans have constructed), and the images reiterate that. But images can be used as primary evidence, and it’s been great to work with Bloomsbury who were happy to reproduce full color images. It really is a lovely book!

SBP: There are indeed many key voices in U.S. religions: Tom Tweed, Katie Lofton, Bob Orsi, Debbie Whitehead, Nora Rubel, David Morgan, Ann Taves, and Isaac Weiner are all here. Moreover--again back to the analogous thinking--many of the case studies from Africa, Asia and elsewhere can be thought about on U.S. turf. For example, we might think about how the Central African “masks” that Al Roberts writes about can be thought of in North American rituals of masquerades and Halloween, or how “dress,” as Annelies Moors tells it, impacts our understanding of U.S. religions (among others, Lynn Neal is writing about this now.)

And as many of the posts on this blog site show, there has been a decided shift toward the material dimensions of religious life in studies of U.S. religions, so I think the volume merges well with other currents of study.


SKM: As someone who is a scholar of American religion teaching a senior seminar in Religion and Material Culture this spring, that balance appeals to me, because it gives me a base with which I am comfortable, as well as pushing the readings outside of my own comfort zone. Are there other fields that are as well represented as American religion?

SBP: In an age of massive human migration, the ebb and flow of cultures, ethnicities, and languages
should challenge all of us to rethink our comfort zones. I think part of what “material religion” as a field of study can do is resituate our questions, to make us query the objects, spaces, and role of the body in comparative studies. We have to be attentive to the look and feel of others, to family rituals (right, Samira?!) not just some abstracted doctrinal ideas. 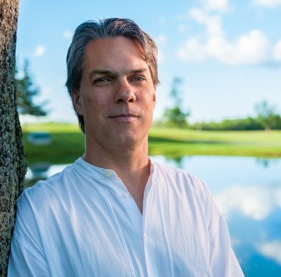 S. Brent Plate is the Managing Editor of Material Religion: The Journal of Art, Objects, and Belief. He is a visiting associate professor of religion at Hamilton College. He is the author, most recently, of A History of Religion in 5 1/2 Objects: Bringing the Spiritual to its senses, which Samira previously reviewed for this blog. He is particularly interested in "what religious humans look at, smell, and otherwise sense, and how religious traditions continue, in part, because they work to train our senses in particular ways."
Email Post
Labels: author interviews brent plate edited volumes material culture material religion new books Samira's posts