Some of you may have noticed that my home for twenty + years now -- Colorado Springs, CO --  has been in the news a lot lately. First there was a mass shooting on Halloween morning, taking the lives of an Iraq war vet and two young women living in a recovery facility. The assailant in this case was reported before his murders, openly and legally brandishing his weaponry as he walked on a street near to downtown Colorado Springs.  I wrote about this incident here, suggesting that "we will all have another chance to pay obesiance to the God that we are all compelled, willingly or not, to worship."

And so we were, just one month later, when another gunman stormed into a local Planned Parenthood facility, shot two who were there (including another Iraq war veteran there to support a friend), and also  killed Garret Swasey, a much beloved campus police officer from the University of Colorado at Colorado Springs, where I have taught since 1996. Swasey, a former Olympic ice dancer, was also a volunteer pastor at Hope Chapel, a local conservative evangelical congregation. (And a few days later, of course, was the horror of San Bernardino, where, once again, toxic religious fantasies combined with de facto unrestricted access to high-powered weaponry led to unimaginable carnage). 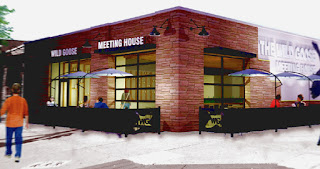 Given the two local incidents, I should have been less surprised that media outlets such as The Guardian described Colorado Springs as "a playground for pro-gun, pro-life Christians." In the process, the paper checked off every box on the "cliches about the American west" list.

For that reason, and also because it hit on some observations of local religious culture I've been ruminating about for a while now, I was grateful when the local public radio station, KRCC, aired an hour-long program "After the Evangelical Vatican," as a segment of a locally produced program entitled Wish We Were Here (if you click on the link, you can stream the program). The producers explore local evangelical culture, focusing especially on hipster evangelicalism, a phenomenon that has taken hold here in some fascinating ways, and one that could only be captured with careful local reporting that relied on empathetic observation rather than the standard cliches. (Pictured is a lovely establishment in downtown COS featured in the program, the Wild Goose Meeting House, a place established by some local hipster evangelicals who wanted "a place where people just want to be").

I hope some of you will give this thoughtful and reflective program a listen. It says much about how religion evolves quietly, and people engage their own journeys in ways that don't capture public attention but ultimately make history in surprising ways. It gave me some small measure of comfort after this week of violence produced by a toxic brew of gun worship and violent religious fantasies.
Email Post
Labels: colorado springs evangelcalism hipsters