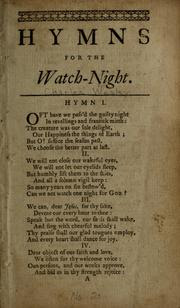 Watch Night church services originated within Moravian communities. During these gatherings, the pastor would begin a sermon just before midnight, never intending to finish. Instead, when the church bells rang in the new day, congregants would interrupt the sermon, either by singing or walking out of the church. This practice was meant to remind participants that Jesus could return at any moment and that the faithful must be ever ready for his arrival. These midnight services gained popularity outside of Moravian churches when John Wesley adopted them. The first Methodist Watch Night services were held in England during the full moon, when attendees would be sure to have enough light for their late-night walk home, and they became popular in the American colonies shortly after the first were celebrated in Philadelphia and New York in November of 1770. Though they began as monthly celebrations, by the nineteenth century, these regular meetings declined in popularity among Methodists, while the New Year’s Eve services became particularly popular as an alternative to the rowdy celebrations that had come to characterize this secular holiday.

Although the Watch Night ceremony began within Moravian and Methodist churches, it is perhaps most popular today within evangelical Protestant churches, especially African American denominations and congregations. This is because the Watch Night service has an additional significance within many African American religious communities. Sometimes referred to as Freedom’s Eve ceremonies, church services in many black churches not only mark the beginning of a new year and a fresh start, but also commemorate the end of American slavery. 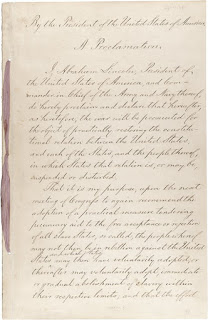 In 1862, Abraham Lincoln issued the Preliminary Emancipation Proclamation, which read “on the first day of January…all persons held as slaves within any State, or designated part of a State, the people whereof shall then be in rebellion against the United States shall be then, thenceforward, and forever free.” Although the proclamation was issued in September, Lincoln promised to sign the document on the first day of the new year, thereby declaring the freedom of all the slaves in any Confederate states that had refused to rejoin the Union. On December 31, 1862, enslaved and free people gathered in churches and hush harbors throughout the divided country in anticipation. One popular story tells of a man in Boston running into the Tremont Temple Baptist Church just before midnight announcing that freedom was coming to the South. Although slaveholders in Confederate states obviously did not recognize Lincoln’s authority to issue such an order, nor was there any way for Union forces to enact such a decree, the proclamation was nonetheless symbolically significant and has therefore been remembered in innumerable African American churches every year since. 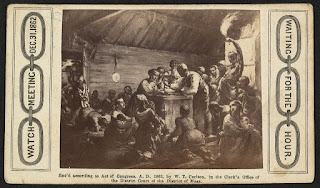 In addition to commemorating the events of 1863, congregants in African American churches gather for many of the same reasons that early Methodists had. Watch Night services provide a religious way to celebrate an otherwise secular holiday that is often characterized by drunken revelry. Churchgoers gather in the late evening and hold services until the dawn of the new year in order to contemplate the previous year and evaluate their choices. They also think ahead to the coming year, make resolutions, and renew their commitment to God. Prayers are said, songs sung, and sermons given, and in some cases the Emancipation Proclamation is read.

Although Watch Night services have traditionally taken on an additional historical significance within African American religious communities, this additional meaning is becoming increasingly less known. Many African American church celebrations today are indistinguishable from European Watch Night celebrations and no longer include any reference to Freedom’s Eve. This has led some ministers to question whether they should continue to celebrate the event. New Year’s Eve is not, after all, generally thought of as a religious holiday, and as the particular African American historical and cultural significance becomes less commonly understood, some have chosen to abandon the practice all together. Nonetheless, the Watch Night ceremony remains significant in many African American churches, and the tradition is likely to continue for many years to come.
Email Post

Lacy said…
This is fascinating. Thank you for this insightful discussion, Monica C. Reed. Keep it up!
December 31, 2015 at 8:30 PM