A Dozen Questions with David Mislin 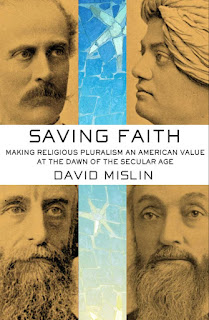 David Mislin is on the faculty  of the Intellectual Heritage program at Temple University and received his Ph.D. from Boston University. I interviewed David about his new book, Saving Faith: Making Religious Pluralism an American Value at the Dawn of the Secular Age.

PC: You identify a sea-change of sorts from Protestant ascendancy to Protestants’ acceptance of religious pluralism, over the period 1870 to 1930. Tell us a bit – if you don’t mind – about the main contributions of Saving Faith?

DM: The book’s main argument is that there’s a history going back to late 19th century, of mainline Protestant leaders accepting and embracing religious pluralism, and this embrace grew primarily out of deeply felt anxieties about increasing secularism. The second argument is that because of the enormous cultural and political influence of these Protestant leaders they were able to create institutions and a national rhetoric into their ideas about pluralism.

PC: So the Protestants are still generally “running the show,” but in the late 19th century some other religious groups are on the scene, and accepted?

DM: Exactly. There’s a sense that they are running the show less-and-less. There’s a growing fear among these Protestants that they’re no longer going to be able to exert the authority that they had before. They start thinking about what that means and how they should respond to that.


PC: Saving Faith offers readers a fresh take on the years 1870 to 1930, moving beyond a general crisis of faith, a trend towards therapeutic religion, or inexorable secularization. As you rightly note in the introduction, T.J. Lears’ work on the therapeutic has loomed large in our interpretation of this period. James Turner’s Without God, Without Creed also comes to mind.

DM: I am enormous fan of both of those really important works. My biggest revision is to push back on the idea, present in so much of the scholarship, that Protestants in this period carelessly drifted toward a squishier faith. In other words, that these Protestants gradually accommodated themselves to a consumer, therapeutic culture without even realizing it. What I argue is that they had extremely intentional ways of interrogating their relationship to modern culture, including to the religious diversity around them. This was a strategic, thoughtful approach.

PC: The first chapter of Saving Faith explores how doubt helped bring about Protestants’ acceptance of religious pluralism. Tell us more about doubt.

DM: The acceptance of doubt was really their first step towards embracing pluralism, because once they admitted they did not have all the answers and that their knowledge of doctrine was not absolute, then it became possible to think that maybe other faith traditions had elements of value.

PC: Your subjects hold this tension, they accept pluralism, but they still prefer their own denomination. Was this an agonizing process or was it liberating? Tell us a bit about this tension. I found a mixture of sorts in the text.

DM:  I don’t think the process was particularly agonizing, but this tension is important. Historians typically see American Protestants as either exclusivists that assumed only they were right, or as complete relativists. But there was a middle ground. Put simplistically, the people in my book would say “all religions are great, ours is just better.” Mainline leaders held onto this tension for a good 50 years before some would go on to adopt a more relativistic outlook.

DM: This is not just an “origins story.” One of the new trends identified in the book is doubt – we’ve looked at interfaith relations and Christian-Jewish relations. But I don’t think that we’ve really studied the relationship between doubt and pluralism in liberal Protestantism, especially in this period. This is not something that developed later – doubt is an essential component of liberal Protestant theology.

My work highlights how central ecumenical and interfaith commitments were in liberal Protestantism from the time it really gained popularity in the late nineteenth century. These weren’t commitments that developed later but were with it from the beginning.

DM: There was absolutely interreligious cooperation during World War I, and many of the same images and tropes that would be used in WWII made their first appearance. I discuss this at length in a new article in Church History.  World War I is really the first moment when the political culture and liberal Protestants’ pluralist impulses align. This is a moment where there is an effort by national leaders to shape a national culture both to support the war effort and to project a national culture. The people I write about were already very close to those circles of political power so World War I is a moment to enact their ideas about pluralism.

One of the major differences, though, was that after WWI there was a strong desire among many Americans to put the war experience behind them with the “return to normalcy.” A lot of the institutional manifestations of interfaith ideals got left behind.

PC: Tell us about George Coe? Why is he an important figure in American Religious History?


DM: I think Coe is on my list of the top-10 most underappreciated religious intellectuals in U.S. history; his own life and experience was a microcosm of mainline Protestantism – he was the child of evangelicals, but was never comfortable with revivalism; he’s certainly noteworthy as a pioneer in the field of psychology, but unlike his contemporary William James, he kept active within denominations (writing for denominational periodicals, for example). His own life reflected many of the trends of mainline Protestantism -- later in life he became more open to questioning even the divinity of Jesus; but he also argued that Protestants had failed to fully account for the problem of evil/suffering, in many ways anticipating Niebuhr’s critique.

PC: The story about the Maine Interdenominational Commission was fascinating. So was the widespread effort to make transferring denominations easier. Tell the blog about the institutional impulse of this intellectual trend. Do you see Saving Faith as an intellectual history? How does the historian trace the ways theological ideas inspire institutional action?

PC: So think of them more as ministers in the world rather than intellectuals in a study?

DM: Exactly. They were thinking about the problems in their own churches and extrapolating from that to the world at large.

PC: Talk a bit about your project in the history of Anti-Catholicism and Anti-Semitism in American history. How do liberal protestants of the 1870-1930 moment embrace religion as a social action and also of ethics (rather than doctrine)?Yet, as you make clear, these liberal theologians leave the era's commitment to Anglo-Saxon superiority pretty much in place.

DM: A few things: first, I think my book takes some of the blame off of liberal clergy for anti-Semitism/anti-Catholicism. They were certainly guilty of not doing enough to speak out against both, and at times of perpetuating both. But on the whole liberal Protestants were some of the strongest voices against both. And one of the tensions here, which makes this story difficult to tell, is that very few of the people I write about carried their commitment to pluralism beyond the realm of religion – at least not initially. So there is this strange tension whereby my subjects are quite supportive of other religions, but not necessarily of the immigrants who were followers of those religions.

PC: I think it’s admirable when historians work to include Protestants, Catholics, and Jews in the same text of American History. Can you tell us about working in these three traditions?

DM: I originally planned this as a study of Protestant-Catholic relations in this period. I thought I could argue that there was this considerable warming on both sides. What I found is that Protestants thought much more highly of Catholics. Catholics saw Protestants as useful partners but they didn’t necessarily change their views on Protestantism. So that’s what pushed me towards the project. When I dug into the project I realized that Protestants were saying the same things about Jews, Hindus and Buddhists.

But I think it was the fact that there was an overall Protestant focus that made the project manageable. I did work in Jewish archives, for example, and with some Catholic sources, but primarily with an eye toward the question of how Protestants were thinking about pluralism and embracing interfaith commitments. Without that focus, this could have gotten unwieldy!

Mark T. Edwards said…
Thanks for this interview! Can't wait to read what looks like another excellent contribution to the new literature on liberal/ecumenical/mainline Protestants.
December 3, 2015 at 8:11 PM