Islam is a Foreign Country: American Muslims and the Global Crisis of Authority: An Interview with Zareena Grewal 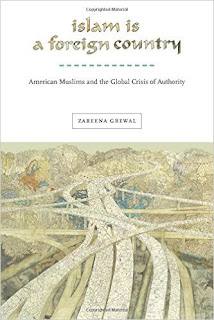 Zareena Grewal. Islam is a Foreign Country: American Muslims and the Global Crisis of Authority. (New York: NYU Press, 2013)
SKM: Professor Zareena Grewal, thank you so much for agreeing to join me on the Religion in American History Blog. I so enjoyed your book and am looking forward to teaching it in the next couple of weeks. I wanted to start by asking you about your method and format. You very deftly weave history and ethnography together with vignettes from your own experience. How did you come to the decision to include your own narrative?

ZG: I have to admit the decision to write about myself was a tortured one and over the years I wrote versions of the book that did not have any elements of memoir. My hesitance and my ultimate decision to include my own story alongside the stories of the American Muslim seekers came out of grappling with the reality of the book market since September 11th and the demand for first person accounts of Muslim women who look and sound like me but who have very different political commitments than my own. If you walk into any bookstore in the US, Canada, Europe or Australia and you find the Islam section you will undoubtedly find several best-selling memoirs written by brown and black women who identify as either former Muslims or “recovering” Muslims in which their first person account confirms all the same, predictable racist tropes and Orientalist fictions: Islam is pathologically violent, misogynistic, regressive, a pre-modern relic. In other words, these authors use memoir to a particular political effect; as a victim of an abusive father or husband or cleric these authors posit they are really victims of Islam-with-a-capital-I and, therefore, experts on Islam. Since I was writing a book about religious expertise and debates about Islamic authority, I wanted to borrow the conventions from these political memoirs and turn them on their head.

SKM: Can you give me an example of how you played with the genre of political memoir?

ZG: The book starts out in very familiar territory with an anthropologist’s arrival scene in Dearborn, Michigan, with allusions to my childhood growing up in that area and only later you find out that Dearborn is not the field site as you might have expected it to be and that my authority claims are not based on my personal experience or even the letters behind my name. My claims as a scholar are not immune to scrutiny. The conventions of memoir allow me not only to destabilize my own authority and to caution readers that I, for one, do not claim to speak for Islam or all Muslims or even all American Muslims and to ask why we expect a book to do that. So it is also a challenge to the authority of this genre of women’s memoirs-that-are-really-manifestos and to reveal the very conservative, often war-mongering and xenophobic politics underneath the seemingly liberal call to reform Islam.

SKM: And the history and ethnography. Let me start with a very basic question: what made you decide to contrast American Muslim history, largely from pre-1965, with more contemporary examples of American Muslim’s traveling abroad to “discover” Islam? And to write those accounts in vignette-form?

ZG: Islam is a Foreign Country is based on my PhD dissertation, although it is considerably expanded from that original work which I undertook as a graduate student at the University of Michigan in their interdisciplinary program in anthropology and history. So from the beginning the project anchored the contemporary pedagogical networks in a longer intellectual history. Although I interviewed a huge number of people, I realized early on that the material would come to life much better if I focused on a few of the most interesting people I encountered and interviewed, and that I could write their accounts in a way that represented not American Muslim seekers per se, but they could represent the diversity and therefore the impossibility of having a dozen people stand-in for these networks of students and teachers which involve thousands of people from all over the world.

SKM: How did you select your historical examples? Were they selected with an eye to how they set up the ethnographic examples or did you start with the history and work from there?

ZG: Well, I think because it was an intellectual history the cases for me were self evident. I wanted historical cases that were earlier versions of contemporary arguments but there was a process of editing in which I had to trim cases that I had thoroughly researched because it veered too off-topic for the argument I ultimately made. Someday I should turn those into journal articles. When you begin ethnographic research or historical research you usually do not know what the argument you will be making with the material will be because you have to tinker with the pieces for a long time before they settle into anything close to an argument. I wanted to undermine the sectarian and ethnic and racial normativities of the subfield of Muslim history is the US. I wanted to write against what I call the “village effect,” in which scholars act as though black Muslims or South Asians or West Africans all live in one place and only talk to one another when we all know the reality is far more fluid and always has been. So I needed a framework that would allow me to capture that fluidity and that would surprise readers with the repetitions of questions over time and approaching the material through the lens of global debates is what did that for me. When we consider their ambivalence about America, it is a surprise I think to find that despite their very different theological views, Elijah Muhammad of the Nation of Islam in the fifties sounds not so different in some ways than a white American Sunni sufi expat, Nuh Keller, who is living in a compound in Amman, Jordan today.

SKM: A central concern of your book is authenticity--you depict young, often American born Muslims traveling abroad in search of an authentic Islam. Why do you think that, for these people, who were, after all, raised Muslim, “authentic” Islam is something that exists elsewhere, rather than in the United States?

ZG: Yes, this is the central theme of the book, the authority of elsewhere because elsewhere is seen as more authentic. At the same time, the very same seekers who travel outside the US to find that Islamic authenticity--and they imagine it in so many different ways, influenced by American Orientalism as much as they are by Islamic pedagogical norms, are also committed to the notion that authentic Islam has the potential to thrive within the US. That contradiction or tension, the push-pull of claiming here while also claiming there, is the subtext of all of these debates that seem to be about “just Islam.” What I argue is that the religious imagination of American Muslims is profoundly geographic, so even debates that are not explicitly about east vs West or then are implicitly often conflicts about mapping authenticity in place and time.

SKM: I also want to ask you about your turn to activism. Allow me to once again both offer my condolences on the deaths of your family in Iraq and my admiration for the article that you wrote. If I may ask, what lead you to decide to speak so publicly?

ZG: For so many years, I’ve devoted so much of my scholarly and activist energies to correcting the prevailing misinformation about Islam in the US and to humanizing the Muslims that make Americans most uncomfortable. It is easy to like Muhammad Ali or Kareem Abdul Jabbar, at least, relatively easy for many people who are not open bigots. The woman in the hijab on the bus or the idea of “radical” Muslim youth might be very frightening to people who would profess to love Muhammad Ali. Part of what my book does is recuperates the figure of the radical Muslim from that of the terrorist. In fact, Muhammad Ali was and is a radical Muslim, radically committed to social justice. The young people I describe in my book are politically radical, devoutly religious, and ambivalent about America but also very American in much the same way Muhammad Ali is. When my husband’s family was killed in a drone strike in Mosul and the New York Times approached me about writing an oped about it, suddenly I was in the very odd position of trying to humanize people I loved very deeply and people I was mourning. I wrote the oped because it was the only way to get the Pentagon to even accept responsibility for the airstrike, which they finally did, and they are now considering an investigation into civilian losses. In 5,000 airstrikes in Iraq, my husband’s relatives may be the first civilians the Pentagon will admit to accidentally killing according to the advocacy and watchdog group, Airwars. This makes it worth it because it could create a precedent for other Iraqi civilian victims and it pushes against the policy of airstrikes. But it took a lot out of me to put aside my grief and perform as a writer and an advocate and an activist in a moment when I only wanted to be a mourning family member.

SKM: Has that experience changed how you view other activists?

ZG: It has softened my critical view of humanist projects like Humans of New York. There was an article in the New Yorker this week that offers a critical perspective on HONY and while I understand such critiques I have less patience for them these days because I am so impressed with HONY’s impact on refugee policy. There is a lot of talk about public intellectuals and public humanities and while I can concede there might be certain conceptual flaws with HONY or political critiques I might sympathize with, at the end of the day HONY is laboring to make the world a little more humane. And so Brandon Stanton and I are on the same team, and I think he’s a really talented visual anthropologist and a committed social justice activist. 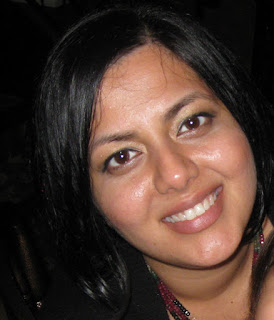 Zareena Grewal is a historical anthropologist and a documentary filmmaker whose research focuses on race, gender, religion, nationalism, and transnationalism across a wide spectrum of American Muslim communities. Her first book, Islam is a Foreign Country: American Muslims and the Global Crisis of Authority (NYU 2013), is an ethnography of transnational Muslim networks that link US mosques to Islamic movements in the post-colonial Middle East through debates about the reform of Islam. Her first film, By the Dawn’s Early Light: Chris Jackson’s Journey to Islam (Cinema Guild 2004), examines the racialization of Islam and the scrutiny of American Muslims’ patriotism long before September 11 2001. Her forthcoming book, titled “Is the Quran a Good Book?”, combines ethnographic and cultural studies analyses with historical research to trace the place of the Islamic scripture in the American imagination, particularly in relation to national debates about tolerance. She has received awards for her writing and research grants from the Fulbright, Wenner-Gren and Luce Foundations. Dr. Grewal is an associate professor of American Studies and Religious Studies at Yale University.
Email Post
Labels: author interviews book reviews islam Islam in America Samira's posts