Evangelical Fundamentalism and the Command-Supply Chain: A Short Historiography of the Retail Revolution 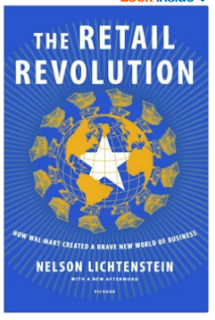 A few years ago, I read an outstanding book that helped me understand how and why Walmart products were so cheap and big-box stores were impossible to competete with. Nelson Lichtenstein's The Retail Revolution articulated how Walmart cut out the "middle man" within production and distribution and extracted the maximum labor from their employees. It was easily one of the best books I ever read. Yet, I still wondered: how does Walmart really get empoyees to be willing to part with their labor so cheaply? How did it sell so many Americans on the idea that "cheap goods" are part and parcel of the good life? 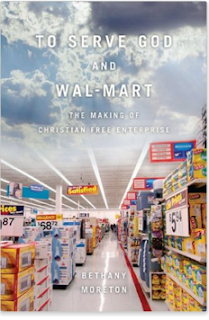 Another outstanding book quickly came along to answer these questions. Bethany Moreton's To Serve God and Walmart articulated how evangelicalism fostered a culture of selfless, undercompensated Christian service, particularly among women. Its upper South/ Populist roots also fostered a near-religious belief in the value of bulk-buying and in the economic waste of "middle men." Moreton showed direct connections between the supporters of Sam Walton and evangelical Populists within the rural South and Midwest. We learned that evangelicalism helped foster the rise of the supply-command chain that made Walmart successful. This book, too, weas so outstanding that it left a cliffhanger: How and when did evangelicals fall in love with cutting-out-the-middle-man? How and when did the love for bulk buying compute to a love for big business?

More books have already come along to help answer these questions. I want to briefly illustrate two of them here, and elaborate on each in coming posts. Both of these new books are not only excellent, but they build off the work of their predecessors remarkably. Considering the books currently in the pipeline which add to this conversation, I would call all this a veritable subfield in "Evangelicalism and the Retail Revolution." 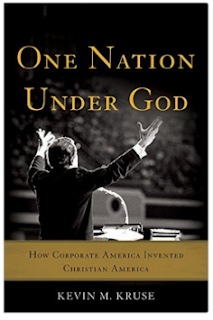 Kevin Kruse's One Nation Under God  illustrates how American business leaders branded capitalist free enterprise as Christian in their efforts to oppose the New Deal. Eisenhower built upon this Christian support for free enterprise in selling the Cold War to the American public. That is, Kruse confirmed Moreton and Lichtenstein's analyses that suggested the relationship between evangelicals and business leaders began in the 1930s. He found evidence of extensive relationships between business leaders and evangelicals (informing both sides) during that time. Kenneth and Elizabeth Fones-Wolf found the same in their Struggle for the Soul of the Postwar South.

Yet, finding a definite confirmation of a relationship only stirs more questions. The most visible questions for me were: Why the 1930s? What was it about this Depression/New Deal era which catalyzed a new era for American evangelicalism and American capitalism? Though the Fones-Wolfs thougfully discussed the role of apocalypticism in the creation of this new labor/religious regime, nobody had yet discussed the strange confluence of the rise of Fundamentalism and the rise of Big Business. 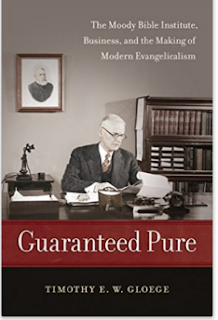 Tim Gloege's Guaranteed Pure answers those questions and more, for it effectively weaves back in our earlier discsusions on the retail revolution itself. His book has illustrated the budding relationship between premillenialists and free-market capitalists throughout the late nineteenth and early twentieth century through the history of DL Moody's anti-denominational church. He argues that Fundamentalists like DL Moody stole the "middle man is bad" marketing techniques of folks like Sam Walton to in order to sell Fundamentalism itself--directly to religious consumers. Meanwhile, business leaders rode the wave of this "Old Time Religion" when they marketed goods like Quaker Oats and Aunt Jemima's pancake mix as genuine, authentic, old-fashioned, pure, and direct-from-the-source. That is, they built new "old fashioned" brands (the brands Sam Walton would later try to destroy) around the very idea of cutting out middle men.

Future posts will explore all this more carefully, but some preliminary reflections are in order: Once we have learned that both "Old Time Religion" and "No More Middle Men" were in fact two sides of the same marketing campaign, we must consider twentieth century evangelicalism (and particularly Fundamentalism) as the product of a retail revolution. Lichtenstein described this revolution as the building of a new command-supply chain that controlled the markets from the very top. As Gloege has explained it, Fundamentalism was so successful because it cut out the local preacher as a religious authority and recentered control within the Fundamentals themselves (directly marketed to consumers). To what extent is the history of twentieth century evangelical/Fundamentalism an effective transfer of control and authority up the supply-chain? To what extent did this lead to gains in "efficiency" of mass-distributed ideas? And, who profited from this transition? More on all this next month.
Email Post
Labels: capitalism fundamentalism janine's posts

Elesha said…
Really interesting, Janine. I'm not sure I can go quite this far, though: "we must consider twentieth century evangelicalism (and particularly Fundamentalism) as the product of a retail revolution." If you mean evangelicalism and Fundamentalism as cultural phenomena, led by salesmen rather than scholars and remarkably adept at using 20th-century marketing techniques, yes. But these movements' ideological effort to recapture "Old Time Religion" and "Cut Out the Middle Man" reflects much older trends within Protestantism. Luther and Calvin acted on this impulse, touting "sola scriptura" and dethroning priests. The Puritans were primitivists, as were nineteenth-century figures like Alexander Campbell, Barton Stone, William Miller, and Joseph Smith. Evangelicalism and Fundamentalism are "products" of this history, too, not only of the invention of direct-to-consumer marketing.
November 10, 2015 at 9:06 AM

Janine Giordano Drake said…
Great points, Elesha. Thanks for that. Nonetheless, I'm still not sure which is the cart and which is the horse. One might make the Weberian argument that Protestantism was itself the product of the retail revolution of the 1600s, right?
November 10, 2015 at 9:19 AM

Elesha said…
One can definitely make a Weberian argument, which would then be subject to all of the critiques of Weber (for examples, http://www.csudh.edu/dearhabermas/weberrelbk01.htm). I guess I'm more apt to find resonances than causation in history. Why a movement becomes popular is somewhat easier to determine than why it began at all, but even then, the historian is caught between "here's how historical actors explained themselves" and "here are all the things that were true but the actors didn't talk about." When Protestants long past and recent past describe their own ideas in religious rather than economic terms, I'm at least going to give those statements serious consideration, alongside other kinds of evidence. I'm not comfortable labeling either set of concerns "cart" or "horse," except perhaps in discussions of very specific developments.
November 10, 2015 at 10:48 AM

Anonymous said…
Thanks for the post Janine! I agree with Elesha that the impulse to do away with church (or minimize its power) can be traced from the Reformation and on down the lineage she suggests. But the point I try to make in the book is that every one of those projects failed. Which is to say, they were either shunted to the social periphery (because they produced some sort of social disruption) or they morphed into a churchly form (i.e. a denomination) with creeds, theological traditions, and so forth) in order to maintain order.

So what sets apart fundamentalists/self-identified evangelicals is not their desire to diminish the power of the "middle man" (denominations), but the means by which they go about doing this: methods rooted in business techniques developed between 1880 and 1910.

Evangelicals have managed to remain relevant players by means of an ever-shifting array of independent institutions. They promote an ever-shifting "orthodoxy" rooted in some core evangelical assumptions about God and humanity, the Bible, and the inevitable results of authentic faith--an "orthodoxy" oriented toward religious experience rather than formal creeds, systematic theologies, and rituals. In other words, they are maintaining a semblance of order and control over a religious discourse. But unlike the followers of Luther or Calvin (or Wesley or Campbell or Stone or Joseph Smith or Ellen White), they are doing this without forming a sect or denomination.

All this suggests something distinctive is going on here. And in that sense at least, I would argue that modern evangelicalism is a product of the retail revolution.
November 11, 2015 at 7:36 AM