What the Map of Urban Religious Histories Shows Us

Earlier today Paul Putz wrote a post about an interactive bibliography that he and I created of books that study American religion in the context of cities. Paul explained our motivation for the project and how we created it. I'd like to offer a few observations about what I think we can learn from the map. 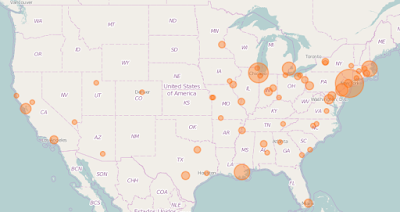 First, and utterly unsurprisingly, the map basically aligns with the urban population of the United States. So New York, Chicago and Boston, followed closely by New Orleans, Washington, Detroit, San Francisco, and Los Angeles, are the most written about cities.

Third, urban religious history has been written predominantly as the history of Catholics, Jews, and African Americans. A rough count shows at least 44 books specifically about Catholics, at least 25 about Jews, and at least 26 books about African Americans, out of our current total of 178. This says something about how the field thinks about (or, at any rate, thought about) religion and cities. That is to say, that urban religion and ethnically or racially marked religion were considered to be linked, while unmarked (read, white Protestant) religion was thought of as transcending specific places. This is probably an overstatement. But then again, many of the exceptions to this rule are about Southern white religion, which can again be read as a kind of ethnic marker.

Fourth, the vast majority of these books are about a single denomination or group. There are well know exceptions that deal with multiple groups, such as Gerald Gamm's Urban Exodus: Why the Jews Left Boston and the Catholics Stayed, and it is certainly possible that I am not familiar with works that deal with multiple religious groups in a single city. (We also don't include the chapters in American Congregations on the map.) But this strikes me as mostly a missed opportunity to study the religious congregations as participants in an ecology of religion, as modeled by sociologists Nancy Eisland in A Particular Place: Urban Restructuring and Religious Ecology in a Southern Exurb and Penny Edgell in Congregations in Conflict: Cultural Models of Local Religious Life.

Fifth, there is reason to hope that recent endeavors in the digital history of religion, specifically mapping projects, will take up richer models of religion in urban space. A leading example is the Houses of Worship project at the University of Minnesota, created by Jeanne Halgren Kilde—who has also been writing quite a bit about space and religion—and a team of researchers. The Houses of Worship project (map here) includes "information on over 250 congregations and over 500 sites related to religious and ethnic groups who settled in several neighborhoods in the Twin Cities" from 1849 to 1924. Chris Cantwell and Daniel Greene have put together an online exhibit/essay on Catholics, Jews, and Protestants in Chicago, titled "Faith in the City: Religion and Urban Life in Chicago, 1870-1920." There was a panel on just this topic at ASCH this January, featuring Marie Basile McDaniel's GIS work on colonial Philadelphia, Judith Weisenfeld's study of Father Divine and utopic space in Harlem, Kilde's Houses of Worship Project, and my own work on mapping. All of these projects were rethinking the way in which urban religious history is conceived, and I think they were all interested in how different groups related to one another. This is a topic for another post, but there is an enormous amount of (potentially) spatial data about religion that historians have long known about but haven't known what to do with. More on that another time.

Final observation: the very first book that Paul put in our spreadsheet was Wallace Best's Passionately Human, No Less Divine: Religion and Culture in Black Chicago, 1915–1952, which is also my all time favorite book on this list, though Orsi's Madonna of 115th Street, Johnson's Shopkeeper's Millennium, and Bendroth's Fundamentalists in the City are pretty high up there too.

Dusty said…
Lincoln and Paul, this is a great project and thank you for undertaking it!

I am wondering about another possible observation about the map: Are most cities places where there are PhD programs in religious studies (or nearby) or else faculty in other departments who support research on religion? My hunch is that a lot of work done on city- or town-based religion is the product of relatively easy commuting accessibility for the authors (either where they did their graduate work or where they were hired). Thoughts?
October 20, 2015 at 11:46 AM

Unknown said…
Dusty: Yes, absolutely. I think it is about faculty and graduate students at particular institutions, but also about what particular presses are willing to publish. The city that stands out on the map to me is Indianapolis. It has three books: two written by faculty affiliated with IUPUI, and all published by Indiana University Press.

I recall that one of my professors joked that global history used to mean that one got as far west from Boston as Worcester.
October 20, 2015 at 11:58 AM

Anonymous said…
I'm really liking this series, not the least because the list includes some of my favorite books...

My second book should probably be added to the database, as it is specifically about the context of practicing Buddhism in Richmond, Virginia: Jeff Wilson, "Dixie Dharma: Inside a Buddhist Temple in the American South" (University of North Carolina Press, 2012).

In regards to Dusty's observation, I think proximity is often an important aspect of project selection. My first book ("Mourning the Unborn Dead") initially arose from observations of an unexpected ritual event I saw at a temple in Rochester, which I visited simply because that's where my in-laws were living. And it's no coincidence that the majority of the subsequent field sites I visited were in LA, where I was living by then. For Dixie Dharma, the initial fieldwork was done while I was a grad student in Chapel Hill, 2.5 hours from Richmond, and that was a factor, as was the ability to do further research years after graduation due to having family in-state in Virginia whom I could stay with. In other words, locations of grad programs/universities is an important piece of the puzzle, but also personal networks of individual researchers come into play. I have far more often researched a phenomenon that was reasonably close to a place I either lived or frequently visited already for other reasons, than chosen to research something that required time in a place where I had no connections whatsoever.
October 20, 2015 at 3:36 PM

Unknown said…
Thanks for the comment, Jeff. Glad to see our guesses confirmed by your experience.

And thanks for the reminder about Dixie Dharma. I've added it to our list and will update the site.
October 20, 2015 at 4:11 PM