This Day in American History: The 1963 Chicago School Boycott 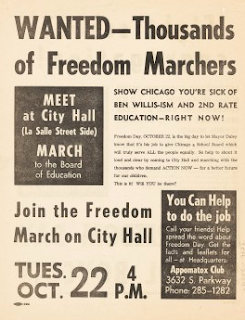 It is well known that in the mid-1960s Martin Luther King, Jr. and the Southern Christian Leadership Conference (SCLC) began working on the Chicago Freedom Movement. Members of organization wanted to expand their reach into Northern cities to combat the segregation and slum conditions that were ubiquitous above the Mason Dixon line. The history of racial tension and violence in Chicago along with the significant African American population and pervasive de facto segregation there made it an obvious place to start this expansion. What is often missed when we focus on the growth of the famous SCLC, though, is the influence of Chicago-based organizations that were active in the city in the years leading up to King’s move. The population and history of Chicago made it an clear choice, but so did the presence of many influential and respected African American leaders and civil rights organizations. One of those groups was the Coordinating Council of Community Organizations (CCCO). 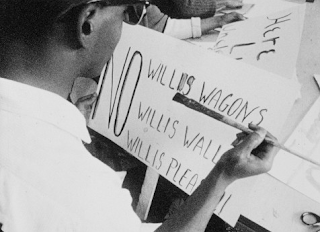 Although the CCCO is perhaps best known for partnering with the SCLC in 1965, it was active in Chicago politics in the years before. The group developed in the early 1960s and seems to have formed largely in response to the segregated school system and the policies of school superintendent, Benjamin Willis. Students in Chicago were assigned to neighborhood schools, and because Chicago neighborhoods were strictly segregated, so were public schools. Nearly a decade after the Brown v. Board Supreme Court decision deemed school segregation laws unconstitutional, housing segregation in Chicago meant that schools there were as segregated as ever. This became particularly problematic as the African American population of the city grew and the number of school aged children increased. By the early 1960s, the schools in black neighborhoods had became impossibly crowded and under resourced, and something had to be done. Eventually superintendent Willis was forced to find a solution to the overcrowding in these schools, but rather than allow African American children to attend white schools, Willis began setting up trailers in the parking lots of black schools to provide more space. These “Willis wagons” were the last straw for many Chicagoans and the CCCO began organizing against the superintendent and protesting school segregation. 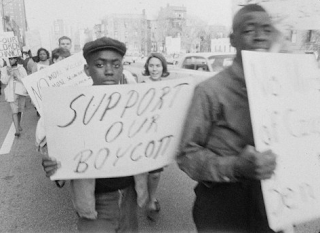 The first large-scale school boycott organized by the CCCO took place on October 22, 1963. On that “Freedom Day,” reports indicate that between 200,000 and 250,000, students stayed home from school and thousands of people marched to the office of the board of education demanding that Willis be removed from his post. Although police stopped the crowd of nearly 10,000 from entering the office building, the AP reported that the demonstrators “shouted, clapped and sang spirituals in the street” while Willis “angrily stalked out of a Board of Education meeting as a board member echoed the sentiment outside.” [1] This protest sparked other demonstrations and was followed by another significant boycott in February 1964 and plans for a third in June of 1965. The 1965 boycott was scheduled for June 10-11 in response to the renewal of Willis’ contract, and after the success of the earlier demonstrations, the Chicago Board of Education went as far as to file a legal injunction against various civil rights groups to halt the protest. According to transcripts from the court proceedings, the Board of Education sought to “enjoin the defendants from encouraging the absence of any child from any school maintained and operated by the Board of Education and from any manner interfering with the operation of any of its schools.” [2] Although the court granted the injunction, more than 100,000 students nonetheless stayed home in protest. 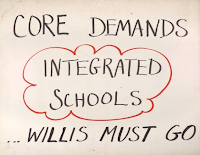 The success of these boycotts brought national attention to the situation in Chicago and highlighted the fact that segregation and inequality were not strictly Southern issues. They were also cited by Martin Luther King as one of the reasons why he and the SCLC decided to move their operations to Chicago. The CCCO went on to work with the SCLC on an important fair housing campaign in 1966, but the organization was unable to survive internal conflict and the resignation of Al Raby as leader of the group. Nonetheless, the CCCO successfully planned and executed some of the most impressive civil rights demonstrations of the 1960s and inspired Martin Luther King to join their fight in Chicago, which is pretty remarkable.