A few months ago, I did a post, "Which Came First? Postwar Evangelicalism or the Religious Right?" on teaching/ sorting through the scholarship regarding anti-labor politics following the Second World War. 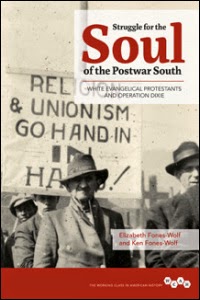 I emphasized the recent publication of Ken and Elizabeth Fones-Wolf's book, Struggle for the Soul of the Postwar South, a wonderful new book on the Congress of Industrial Organizations' post World War II initiative to organize white workers in the South. The Fones-Wolfs begin with the conclusion that the campaign failed. It failed to stop anti-union business people from convincing large numbers of evangelicals to support open-shop campaigns. It failed to create a dominant culture of union-support in the South. But, they query why this is. After all, in the 1930s, there were large numbers of FDR supporters in the South, many of whom were encouraged by his support for legislation which supported working people. Their book explores how and why the CIO failed to transform the growing evangelical lobbies like the National Association of Evangelicals.

About a month ago, the open-access Journal of Southern Religion posted their newest issue, which includes (among a number of terrific forums and articles) a forum on the Fones-Wolfs' newest book, with the authors' gracious response. I encourage everyone interested in the overlap of evangelicalism and anti-labor policies to read the critical reviews, and the book, in their entirety. Alison Collis Greene and Heath Carter each point out the ways that the book advances reserach on working class Christianity, particularly in the South.

The authors offer a very gracious response to the reviews as well. Here is one small excerpt:


"Why, then, did we focus on southern white Protestants? Rightly or wrongly, much of the labor history scholarship suggests that African-American workers, whether religious or not, were more than willing to join unions... The failure of Operation Dixie, historians have asserted, resulted from the flawed decision to target white workers and the inability to organize them in the face of race-baiting and red-baiting. We wondered, to what extent did faith strengthen or weaken these factors? In addition, we operated from the assumption that if the CIO were to achieve its primary goals of building union density and political influence in the South it would have to win the loyalties of southern whites. That did not mean that CIO organizers ignored the concerns of black workers, although some did. Still, Operation Dixie’s organizers who had strong religious backgrounds or connections worked hard to include African Americans. We can only imagine how much more the Civil Rights Movement might have achieved if the CIO had been successful."

Once again, I think we are all missing out if we don't read Fones-Wolfs's newest book alongside the other new research on the rise of postwar evangelicalism (by authors such as Darren Dochuk, Bethany Moreton, Kevin Kruse, and Matthew Avery Sutton). The Fones-Wolfs take seriously the tenet we all theoretically agree upon--that race and class matter to the study of religion. While they naturalize evangelicalism to the South, they do not see the development of an evangelicalism that embraced the Religious Right as an inevitability, for they can see a white working class with different perspectives on work, class, and wealth than their wealthier counterparts. The Fones-Wolfs do an excellent job accessing the unique histories of working class whites in the South. This work is hard to do, but it is essential to really undersatnding religion and politics, especially in the twentieth century.