My Dog Ate My Soul 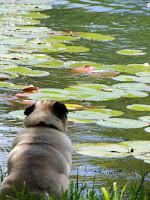 Recently I adopted two pugs "for my children."  Although I used to work with animals before going into academia, I had never been a huge dog person.  (My childhood dog was a bit of a nightmare--a Pit bull mix best known for terrorizing my friends and biting of the heads of my dolls.)  The pugs, however, have taught me there is much to be said on behalf of dogs.  For one, dogs are much more loyal than cats.  While Dr. Know scorns dog owners as crypto-Republicans who "love the top-down, hierarchical thrill of underlings who know their place and think their boss is a god," there is something endearing about having at least two beings in my house that listen to what I have to say with rapt attention ("The Feline Exemption").  Moreover when I was home sick last week, I realized not only was the dog happier because it was near me, I was actually happier it was nearby, too.  With the dog nestled beside me on the couch, I felt that weird euphoria of first love, albeit potentially enhanced by cold medicine.  The pugs even populate my dreams.  One one level this makes sense:  after all, the dogs like to sleep on my pillows and--being pugs--they snore loudly.  Why wouldn't they enter my subconscious? Yet, I also had the nagging feeling for the first time I viscerally understood a kabbalistic edict that had long puzzled me, namely the Lubavitcher Rebbe's prohibition against socializing with non-kosher animals.  My dogs had eaten my soul, or more accurately become affixed to it.  Let me explain what I mean.

Anyone who has spent any length of time with Lubavitch families will have noticed the dearth of toys representing non-kosher animals.  Tiny versions of Noah's ark are populated only by kosher beasts, teddy bears are taboo, and even baby clothes only feature kosher friends.  This is because, as I noted in my previous post on religion and toys, in the early 1980s the Lubavitcher Rebbe requested that his followers not cavort with non-kosher animals or even have representations of non-kosher animals in their homes (Slifkin 36).  Although the Rebbe's supporters follow this edict to varying degrees, at least one women I know who grew up Lubavitch had very visceral memories of the childhood day shortly after the Rebbe's decree when "all the teddy bears went away."  Other people spoke of how they stopped having family pets.  As someone who used to work in animal health care, I always found this edict to be puzzling and sad.  Pets seem to lift our spirits--indeed, some studies have shown that petting dogs releases endorphins and other "feel good" chemicals in our brains (Masters).  Dogs and cats are often used as therapy animals because they can decrease depression and increase human sociability. Moreover, even if one believed "impure" (non-kosher) animals were harmful, why forbid representation of non-kosher animals? At best, this seems to the secular mind (or someone who teaches the Republic each year) like a strangely Platonic distrust of mimesis.  What spiritual harm could animals and their images bring?


Yet, the Lubavitch are not the only Jews to mistrust both animals and representations thereof.  The lack of pets is relatively common among Ultra Orthodox Jews.  This is not merely because many have enough children to meet their emotional needs, nor is it solely because the Nazis used dogs to hunt Jews (left).  Rather, since antiquity a variety of spiritual reasons have been brought to bear against both pets and images of animals.  On the representation front, the Second Commandment prohibits graven images, particularly "any likeness of any thing that is in heaven above, or that is in the earth beneath, or that is in the water under the earth"

or that can become idols. Many Jews have felt this prohibition includes the representation of animals.  Sephardic sage Rabbi Chaim Yosef David Azulai (1724-1806), for example, ruled that "God-fearing" people should not stare at pictures of animals. Yet he and other Sephardic rabbis such as Rabbi Odaviah Yosef felt staring at actual animals --God's creation--was a legitimate and spiritually uplifting experience (Slifkin, Man and Beast, 34-35).  Indeed, there is a beautiful religious book Perek Shirah, which argues everything in creation--non-kosher animals included--teach a "lesson in philosophy or ethics" and sing the praises of God (Slifkin, "Perek Shirah"1).  Even versions of Perek Shirah published by Orthodox presses often have color photos of all kinds of animals, since these images are designed to inspire wonder at God's creation (above right).  Yet, at least for some Rabbis--including many very important ones--admiring animals as God's creation does not excuse keeping them as pets.  Moses Maimonides--the Rambam--argued that "possessing any type of dog, even a harmless dog, is forbidden, unless it is secured by a chain."  The Talmud itself takes an even harsher view, and explicitly states that "one who raises dogs is cursed and can cause the Divine presence to depart" (Slifkin, Man and Beast, 215-16).  While most authorities cite the possible physical damage a "dangerous dog" might pose, this passage from the Talmud suggests the problem with pets is as much spiritual as it is spiritual, since raising dogs causes a distance between man and God.

For the Lubavitcher Rebbe, however, the problem was not just the spiritual gulf between man and God non-kosher pets created, but that non-kosher animals could taint one's soul.  As the Lubavitcher Rebbe explained, what one sees with one's eyes leaves a lasting imprint on one's soul, and "pictures of impure animals harm the mind and soul" (Schneerson).  Moreover, the Rebbe cites the Jewish Code of Law (Shulchan Aruch Y.D. 198:48) that, "Upon leaving immersion in a mikveh women should be careful … that the first thing they encounter should not be an impure thing [such as a dog or donkey]."  A woman who does she these animals should reimmerse herself in order to protect her potential embryo (Schneerson).

Although the prohibition against seeing non-kosher animals and their representation was a stringency, for the Rebbe this stringency was tied to the messianic era.  As the Rebbe explained,

The importance of the above is even more emphasized in our times, the era immediately preceding Mashiach’s [Messiah's] coming. It is our responsibility to prepare for the Messianic era, to “taste” of [As stated, “Those who taste of it merit life” – see Magen Avraham, Orach Chayim ch. 250, subsection 1; Aruch Admur HaZakein, Orach Chayim ch. 250, para. 8.] those things which will then be present [See Likkutei Sichos, vol. 15, p. 282]. And one of those things will be the fulfillment of the promise “I will remove the spirit of impurity from the land." [Zechariah 13:2] A fitting preparation for the Messianic era is to ensure, where possible, that only pictures depicting pure and sacred things be used (Schneerson).

By refraining from viewing representations of non-kosher animals, individuals could help take part in the preparation of the world for the messiah, a figure some followers of the Rebbe identified as the Rebbe himself.  Importantly, the Rebbe also identified children's souls as particularly impressionable and susceptible to the "spirit of impurity" embedded in such representations.  Since Lubavitcher women were most likely to be the ones securing toys and children's clothing, this edict on "Visual Education" presented an important way that women (and children!) could immerse themselves in quotidian activities that took on a cosmic significance of preparing and purifying the physical world.

As someone who was raised by biologists and had never been a follower of the Rebbe, I had never seen the logic in this stringency. Yet, despite all my skepticism, I am not utterly unsure that the Rebbe was incorrect that (non-kosher) animals touch our souls.  According to the Zohar, when we sleep our soul leaves our body.  (In fact this is why many orthodox Jews wash our hands upon rising: because our bodies taken on a small amount of death impurity during sleep.)  Yet if my soul travels when I sleep, if I dream of my dogs, does that mean that their souls travel with mine on that voyage?  Perhaps.  Possibly it means something more telling about myself.  As the Zohar goes on to explain,  "When the body falls asleep... the nefesh [spiritual essence], rises upward and encounters the unclean essences.  If the spirit is pure, if the person had not transgressed the commandments, the unclean essences cannot cleave to the nefesh" (Gersh 42-43).  In this reading, if my dogs cleave to me in my dreams, it is the fault of my own misdeeds.

Whether or not I accept the idea that my dogs are "impure," they are a good reminder to me not to judge things I do not understand, including Rabbincal decrees based on kabbalah.  Yet despite the insights the dog's closeness has brought me, for now it is enough for me that my life seems better for the way the dogs have adhered to my essence.  I find that when I am with them, I too am more dog-like: I am happier, more upbeat, and forgive people more easily.  Hence, I have decided to side with the Rabbis who rule more leniently and follow books like Perek Shira that suggest dogs, too, sing the song of the universe.  Besides now my office is cozier. 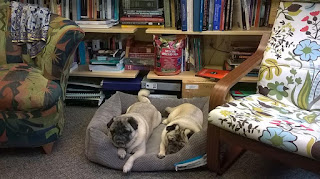