Elvis' Chi and the Metaphysics of Martial Arts 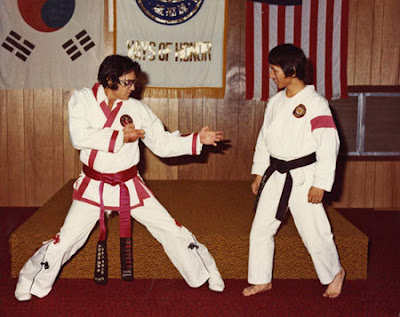 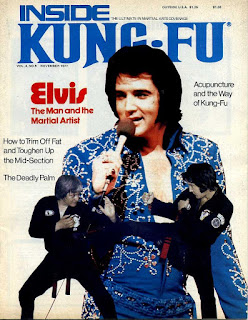 You might not know it to look at him, but Elvis had tremendous chi. And if you don't believe me, then just look at how big his karate belt was. The fact that Elvis possessed such potent inner force and the power to waylay any grown man is little known. But, some say that his musical gifts were paralleled only by his prodigious abilities as a metaphysical teacher/martial artist. Or at least, I said that. Just now. Nevertheless, historiographically, what this amounts to is that Elvis' attraction to the esoteric secrets of karate was but a small part of a larger resurgence of Asian martial arts in America; and this resurgence was tied to a bourgeoning American interest in spiritual "alternatives" and the New Age. Pedagogically, what this amounts to is that we have some great images (and at least one documentary) of Elvis doing some interesting body "energy" experiments for the enlightenment/amusement of our American religious history classes. Yes, he even led meditations.

First, the martial arts. Elvis loved his eye gouges and groin strikes, and was quite proficient in disarming faux gunmen. He began cultivating these lethal skills in 1958 shortly after he was drafted into the Army. Evidently a quick study, Elvis obtained a black belt in less than two years. Over the next fifteen years he went on to train with such martial arts luminaries as Ed Parker - the father of American Kenpo - and Bill "Superfoot" Wallace - the undefeated Professional Karate Association Middleweight Champion. In 1973 and '74 Elvis' passion for martial arts eventually led him to star in (and fund) a documentary on the subject, The Gladiators Project. In the words of the narrator, "Elvis wanted to promote the martial arts and show the world how great it was. It was good for the whole family."

Elvis' interest in martial arts was representative by the mid-70s. In the years preceding, the Amateur Athletic Union recognized judo, karate, and taekwondo as official sports. A host of tournaments, clubs, associations, federations, and dojos were established across the country. Bruce Lee took the popularity of "kung fu" films to new heights, and David Carradine's Kung Fu won an Emmy. Americans sought to learn more and deadly secrets from the East. 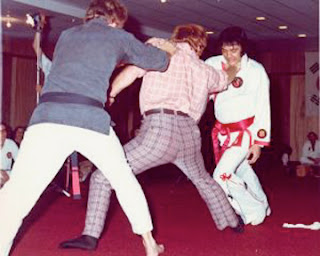 Second, the metaphysics. There was a deeply esoteric side to Asian martial arts in America. To the believing public, such martial arts harbored knowledge of a lethal inner power, the likes of which American boxing and wrestling could not match. There was an ethereal kind of physical reality that Asian martial arts were able to manipulate and control. And so, for as much as Elvis loved good ol' fashion eye gouges and groin strikes, he also took passion in displaying this inner power, in revealing its secrets. "I'd like to share a few things that I've been privileged to learn myself," Elvis told his audience in the previously mentioned documentary. He went on:


I'd like to demonstrate first of all the power, the inner power called 'the chi.' C-h-i, or q-i. Or in India it's called dharma. D-h-a-r-m-a. It's the inner force, the life within all of us that causes us to breathe. The force. I would like to show you how to use this force to keep from getting hurt. 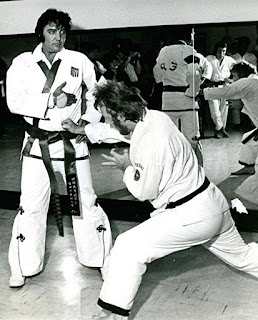 Indeed, the force was with Elvis. As you can see, by all pictorial accounts Elvis' throat chi was formidable, more than enough for two grown men (themselves black belts). And his abdominal chi was all but impenetrable. A "real gladiator," Elvis took great pride in his chi. "He refers to that a lot," the documentary narrator claimed.

Chi power, however, was only available to the most mentally rigorous of martial arts practitioners. It took time, patience, and right mind. For help, understudies and colleagues looked to Elvis, who led karate seminars in meditations "before and after class." As one participant claimed, "It was almost like a spiritual event for me. I heard him speak of Bible verses and parts of the Bible that just came to life when I heard him speak them." 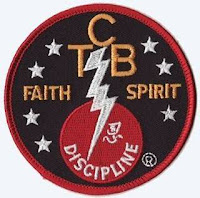 For Elvis, and for many practicing Americans, the backbone of a martial art was in its philosophical system. Elvis really wanted to promote martial arts "through the TCB system," according to the documentary narrator. And this "Taking Care of Business" system was one "where you could use your faith, spirit, and discipline to accomplish anything you want in life." Elvis "had a passion about that. If you're an Elvis fan you know what the TCB meant to him. [...] He had seven stars put on his patch, for seven days of the week, seven colors of the rainbow. He thought that was God's perfect number." Elvis even had the TCB emblem painted on his bus and the tail of his private plane. Founding his own dojo, the Tennessee Karate Institute, Elvis and his fellow believer-practitioners had a place to fortify their bodies and spirits. 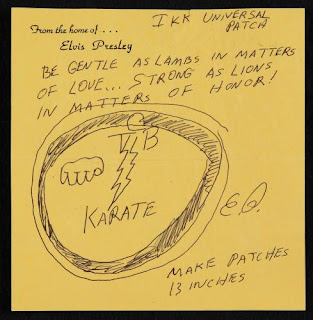 Now, naysayers and skeptics may wonder if what we are seeing here really is chi-power incarnate or just the effects of a pharmacopeia of barbiturates. Sadly, such historiographical insight may elude us. Rest assured, however, that in terms of spiritual leadership and East-West relations, some simply liken Elvis to Swami Vivekananda. Or at least I did. Just now. 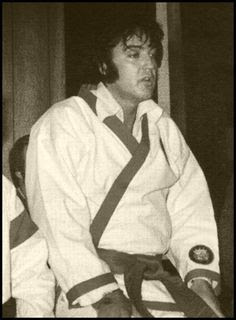 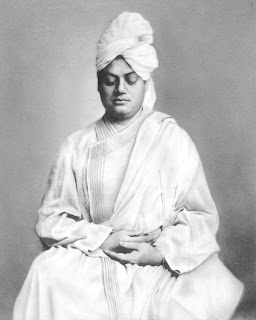