The Seer of Bayside

Today’s guest review of Joseph P. Laycock’s The Seer of Bayside: Veronica Lueken and the Struggle to Define Catholicism (Oxford, 2014) comes from Katherine Dugan. Dugan is a Visiting Assistant Professor in the Department of Religious Studies at Northwestern University. She studies contemporary U.S. Catholicism, prayer practices, and millennial-generation Catholics. Her dissertation is titled “Catholicism Remixed: Catholic Prayer and the Making of Millennial Catholic Subjectivities.” 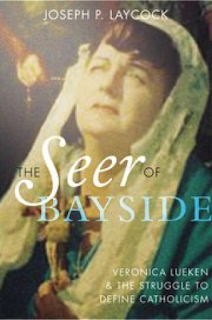 In 2012, Joseph Laycock attended the forty-second anniversary of the Virgin Mary’s 1970 apparition to Veronica Lueken in Bayside, New York. Laycock had already begun his archival work on the so-called “Baysiders” and was eager to see how the contemporary version of this community acted. He encountered a complex mix of Catholic identities, fear of cultural changes and post-Vatican II Marian devotion that had been swirling around Lueken’s visions and messages for the past forty years. With The Seer of Bayside: Veronica Lueken and the Struggle to Define Catholicism (Oxford University Press, 2014) Laycock has written a subtle and clear-as-possible history of complicated (and often convoluted) events surrounding this devotional site and the subculture around Lueken’s apparitions. This text makes important contributions not only to religious history, but also to the way scholars study religious experience.

As Laycock details it, Veronica Lueken first began to suspect she was having extraordinary mystical experiences the night that Robert Kennedy was shot. It was June 5, 1968 and Lueken prayed to St. Thérèse of Lisieux, asking the saint to intervene on the senators’ behalf.  Two years later, the Virgin Mary appeared to Lueken. For the next twenty-five years, until her death in 1995, Lueken received messages and visits from Mary. The apparitions first took place in Bayside Hills, New York and the thousands of Catholics who came to follow Lueken called themselves “Baysiders.”

I first encountered this book in a pile of “free books for graduate students” that a professor of medieval studies had decided he was done reading. My own interest in post-Vatican II Marian devotion is reflected in a thesis on Marian devotion in the 1970s and 1980s that I wrote several years ago. I was studying a shrine to Our Lady of Fatima in rural South Dakota. As Laycock learned of Baysiders, Mary-focused Catholics are not remnants of a pre-Vatican II Church. Rather, their devotion reflects a post-conciliar tension over on how Catholic identity ought to look, move, and sound in the religious landscape. I realized early in my read of The Seer of Bayside that trying to understand the nature of this tension—not whether Baysiders are really Catholic or conspiracy theorists—animates Laycock’s project.

Laycock’s ethnographically informed history of the Bayside phenomena proceeds in three movements. In the first three chapters, Laycock lays out the cultural and Catholic contexts of Lueken’s apparitions. After a chapter that complicates what scholars mean when the say “Catholic,” Laycock compares Lueken to another American Marian seer, Mary Ann Van Hoof. This comparison helps Laycock to describe the world into which Lueken stepped (or, depending on your perspective, was thrust) in 1970.  The focus of the book then shifts to a class analysis of the movement by describing the disputes between Lueken’s devout and the neighbors around the shrine. The nature of dispute shifts in the next chapter, where Laycock details the divisions between Baysiders.  Throughout this history of conflicts Laycock attends to the tensions between laity and hierarchy as manifest at this Marian shrine in the late twentieth century.

The book’s final chapter has a change to a theoretical intervention in the study of religion. Using Baysiders as his lens, Laycock argues that movements like Bayside “problematize the way we think about religious traditions” (194). In the face what he describes as several unsatisfactory approaches to studying Bayside, he proposes that the study of religious traditions requires that scholars become “more attentive to how and why the boundaries of imagined communities are challenged, policed, and negotiated” (197). This refusal to perpetuate the scholarly tradition of taxonomies, Laycock argues, allows religious communities, traditions, and practitioners to emerge as dynamic and changing entities on the religious landscape.

Of the many things I learned from this book—not the least of which was the adroit rehearsal of the somewhat convoluted events around Lueken—I want to highlight three here that are especially timely for scholars of religion in U.S. history.

First, Laycock makes a substantial contribution to methodological conversations about how to study the strange and unfamiliar. He has, in an interview on Religious Dispatches, described his book as an effort to try to render “‘the strange familiar and the familiar strange.’”  The theoretically complicated methodological question here is a familiar one for Laycock. His previous work on vampires, cults, and UFOs are in the backdrop of this work. His careful contextualizations of her apocalyptic messages represent some of the most compelling moments in this book.  For example, what, really, ought we to make of Lueken reports of Mary’s commentary on UFOs and the U.S. space program?  How does that not make her (the pronoun could be either Lueken or the Virgin, really) sound crazy? Rather than engage that question, he shifts attention from how to classify these kinds of religious experiences to attention to the kind of work the Baysiders did with these messages. Mary, according to Baysiders, was urging them to attend first and foremost to God. Laycock positions the Baysiders using these messages to presents a “unified model of how the world works” (101).  This book has obvious interest to scholars of Catholicism, but also has a much broader audience in scholars of religion who are dedicated to finding ways to talk about religious experience and religious practitioners in nuanced and sensitive ways. Laycock has provided both model and charge to do so.

While this does provide incredibly useful thinking about the ways religious practitioners organize their world, there is a way in which Laycock sidesteps the question of what is “really” happening at Bayside. There is, throughout the text, a lack of phenomenological consideration.  Perhaps simply because of my own ethnographically informed interest in how we talk about religious phenomena, I would love to hear more from Laycock on how Baysiders describe their religious experiences at the shrine. Maybe a future article?!

A second take-away from this book is Laycock’s skillful complication of what counts as Catholicism. He proposes that understanding what was/is happening at Bayside is a “process of conflict and collaboration between lay Catholics and Church authorities.” It is not, Laycock insists, that “Baysiders” are “deviant” Catholics, but that their devotional practices represent “an ongoing and asymmetrical debate about what Catholicism is” (12). By proposing that Catholicism is more verb than noun, Laycock opens up the conversation of what Catholicism is.

Two years ago, I was teaching a seminar titled, “Contemporary American Catholicism.” I wanted students to be able to talk about Catholicisms, rather than Catholicism. But I spent much of the quarter resisting students’ request for a tidily bound definition of what and who is Catholic.  They wanted boundaries and I was only giving openings and exceptions. For those of us in the throws of writing syllabi, I would recommend Laycock’s first chapter for a course interested in complicating the definition of Catholicism.

Finally, Laycock’s book also makes a contribution to the still-unfolding history of post-Vatican II Catholicism in the U.S. Lueken, Laycock points out, was almost immediately caught up with a particular subculture of so-called Traditionalist Catholic groups like the White Berets. These American Catholics were worrying that the reforms of the Second Vatican Council were going to far. Already in 1968, Lueken was writing to Pope Pius VI of her concerns in the decline in Marian devotion. Throughout his book, Laycock carefully traces the ways Baysiders navigated their complicated relationship with official Catholicism. They did so not as sedevacantists, but as Catholics who saw themselves carrying the banner of true and good Catholicism through what they understand as a tumultuous time in Catholic and American histories.

One of the eye-catching comments that Laycock makes here is to suggest that Mary had bad timing for Lueken. He posits that, “Had [the apparitions] occurred in nineteenth-century Europe, Church authorities might have found her charisma an asset rather than a liability” (189). This reflects Laycock’s helpful interpretation of Lueken’s post-Vatican II religious context—the fears Baysiders had of changes within the church were mirrored by the fears some members of the hierarchy had of not changing. The implications of this become clear when Laycock briefly considers the next generation of shrine visitors. While these “millennial Baysiders” share their elders’ attraction to the ritual of the shrine, they tend to see it as an alternative to the Catholicism of their parishes.  For example, “receiving communion on the tongue is experienced not as a ritual restoration but a ritual innovation” (182). Laycock’s inclusion of millennials here suggests that, indeed, Baysiders and their “traditional” Catholic rituals represent not backward-movement toward pre-Vatican II Catholicism (an impossibility, anyway), but part of the complex set of Catholic practices that constitute contemporary American Catholic rituals.

The Seer of Bayside is a fascinating read and a careful history that contributes much to our understanding of religious experience and Catholic prayer in the U.S.

Tom Van Dyke said…
Thanks for a fascinating piece and thoughtful review. Here's a working link to the RD interview.

I certainly appreciate Laycock's refusal to judge or ridicule the Baysiders as "weirdoes." OTOH,

"Historians like Robert Orsi have argued that scholars have implicitly made a distinction between “true religion” and various subcategories like cults, folk piety, superstition, etc. I don’t think the Baysiders are a “side show” in the field of religious studies and I think the history of the Baysiders helps us to think about how we tacitly make these sorts of judgments."

as sociology, assigning an significance to this thousand or so Catholics out of the millions in America is a delicate business. There's definitely a tension among Catholics who remain more Catholic than the pope re Vatican II, and I suppose they're no "side show," but a study of the Baysiders may be more misleading than probative to the reader with only a casual acquaintance with Catholicism and of course Vatican II.

Still, "imagined communities" share dynamic commonalities, and on that level, the Baysiders are a wonderful and interesting subject case. Thanks again for quite a find here.
July 31, 2015 at 7:02 PM

Katherine Dugan said…
Thanks for the corrected link! And your comment is helpful affirmation of part of Laycock's project. Thanks.
August 1, 2015 at 12:22 PM