The Impact of Religious Congregations on Contemporary Urban Society


Does the contemporary urban religious congregation have any substantial impact on the city or surrounding metropolitan area it calls home?

It is a simple question on the surface, but one heavy with meaning for any religious historian whose work deals substantially with urban subjects. In many ways, there is substantial overlap between the dominant narratives of urban and religious histories, particularly in the twentieth century; the themes and descriptors used to describe the fate of the postwar American city, phrases that try to capture its decentralization, fragmentation, and reterritorialization, could easily be applied in histories of American religion that trace the decline of the denominational mainline, the rise of evangelicalism, the augmentation and pluralization of the American religious landscape, and the persistent increase of the “nones” or spiritual “seekers.” Indeed, many of the developments of postwar American religious history are deeply intertwined with developments in postwar American geography and urban history, the most prominent example, perhaps, being the migration of urban churches from the inner to the outer rings of the city and eventually to the suburbs, patterns of migration that followed suburbanizing congregants from the 1950s onward. To consider the role or impact of the contemporary congregation in urban America today is to hint at the interrelatedness of these historical restructurings, an urban restructuring and a religious restructuring, and to wonder skeptically at their effect on the possibility of building religious communities in the spatially-disjointed, polarized, and ostensibly secular “postmetropolis.” 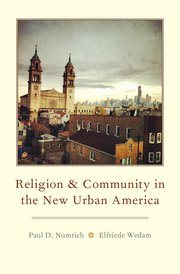 In their recent book Religion and Community in the New Urban America, Paul D. Numrich and Elfriede Wedam analyze fifteen case studies of congregations from a variety of traditions throughout the greater Chicagoland area. Their aim is to better understand the unique challenges of urban congregations today, how these challenges affect congregational life and a congregation’s ability to build a stable and intimate community, and to what extent congregations make a notable impact on their surrounding environments and thus participate in urban change. The volume may be read as a continuation of the important work that has come out of the Religion in Urban America Program that began at the University of Illinois at Chicago in the early ‘90s, in which Numrich and Wedam were involved. In 2000, the program published Public Religion and Urban Transformation: Faith in the City, an important volume that drew on research of over seventy-five Chicago-area congregations to describe the variety of congregational communities and their functions throughout Chicago. In Religion and Community, Numrich and Wedam zoom in on questions concerning the making of community in and through urban congregations, and the urban impact of congregations on their surroundings. Although they repeatedly warn against exaggerating the effects of congregations on contemporary urban life, they nevertheless demonstrate that religious congregations are not only shaped by their urban environments, but that they have also “played a role in recent urban restructuring.”

Despite being a contemporary sociological study and thus potentially outside of the immediate chronological interests of many of RiAH’s readers, Religion and Community has much to offer the religious historian dealing with urban themes or settings. Numrich and Wedam regularly contextualize their studies by reviewing economic and social histories relevant to a given case study’s neighborhood or area, including transformations in ethnic and racial, class, and religious demographics. (The first chapter of the book, in fact, provides a larger survey of Chicago’s economic, social, and political histories with an eye toward the role and impact of religious institutions.) These mini-histories are valuable reminders of the importance of the long histories of space and place when studying urban subjects, as they call attention to relationships between a congregation’s origins and experiences, and its neighborhood and spatial attachments (or lack thereof). When combined with the authors’ contemporary research, these histories often challenge our assumptions concerning urban religious life.

If, for instance, we often think of churches as following congregants out of established neighborhoods during times of racial or ethnic change, the authors’ account of First Christian Church, a congregation on the southwest side of the city, offers an example of an evangelical congregation that intentionally chose to adapt to its area’s changing demographics in the late-twentieth century and to work toward consciously building a multiracial, multicultural membership base, thus becoming a neighborhood anchor during a tumultuous period. Similarly, while we may assume that area- or metro-congregations with more scattered memberships than an urban neighborhood church may struggle to cultivate certain amounts of commitment from their members, the authors provide examples of congregations and religious communities who eventually contributed to a transformation of area demographics. A profile of Mosque Foundation, on the city’s southwest side, shows how the construction of a mosque in Bridgeview acted “as a magnet for Arab residential, commercial, and institutional development” in the southwest metropolitan area. These and other examples suggest that although the American city and its inhabitants may be less “place-rooted” than ever, religious congregations can still play an influential role in the composition and transformation of the urban landscape.
Congregations can impact their urban surroundings in other ways, too. The authors point to metro evangelical congregations whose diversity and large geographic spread actually encourage a greater sense of “spiritual and social responsibility for the entire populace,” rather than for just a specific neighborhood or ethnic group, and encourage “initiating programs that challenge urban inequality across the metropolitan region.” Area churches such as Fourth Presbyterian, paradoxically positioned within Chicago’s illustrious Gold Coast neighborhood yet at the edge of a longstanding “hyperghetto,” have similarly developed programs that impact their immediate surroundings not only by providing valuable educational or social services, but also by simply creating opportunities for contact between the congregations’ members and the members of the broader community. Indeed, the authors suggest that congregational efforts to provide services and programs to surrounding communities “should not be understood simply as serving people in need or fulfilling an expectation of civil society,” but instead as a means of fostering “attachment and accountability” to a congregation’s surroundings (especially at the neighborhood level). By analyzing congregations across a broad range of sizes, locations, and demographic characteristics, the authors provide a compelling glimpse of some of the overlooked ways that religious congregations continue to affect the urban landscape.


Because the experiences highlighted by these contemporary examples are inherently linked to the longer histories and restructuring of the postwar American city, they may prove useful in encouraging historians to rethink some of our assumptions concerning the intersections of mid-twentieth-century urban and religious histories. And for Numrich and Wedam, this work really takes place at the level of the congregation. In her 2013 ASCH presidential address, Laurie Maffly-Kipp reflected on the potential importance of the church in the lives of our historical subjects, on our ability to “[recognize] the profound ecclesiastical pleasures and collective commitments of historical agents.” Numrich and Wedam show that urban congregations continue to perform important community-building functions for their respective congregations as well as impact their surroundings, even as much of contemporary urban life poses unique challenges to the sustainability and growth of congregations and their communities. In many of the case studies offered here, we find testimonials from congregants who describe their religious congregations as places of refuge from the unpredictability and alienation of urban and suburban life, or as sites of identity construction among religious and ethnic/racial minorities, as communities that for one reason or another deserve to be sustained and carried forward into the future. For those whose research focuses on mid-twentieth-century urban subjects, Religion and Community in the New Urban America encourages us to pay closer attention to the presence and persistence of urban congregations and their unique characteristics---whether rooted to a neighborhood or serving an entire metropolitan area, whether at rest or in motion---and to consider them as active bodies that have contributed to their urban surroundings.
Email Post
Labels: book reviews chicago religion in urban america sociology of religion Trevor's Posts