The Church of Wells Invades Lakewood, Or Historicizing a Heckling Incident 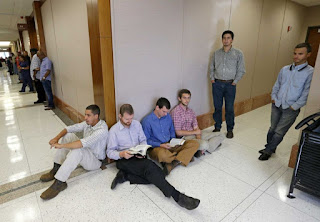 On June 28, six members of the Church of Wells (a small fundamentalist congregation about 20 miles from my home) covertly found their way into the visitors’ section of Lakewood Church in Houston, Texas, and heckled one of the most famous megachurch pastors in the world. They called Joel Osteen a “false prophet” and railed against his form of preaching, declaring it motivational speaking and not the Word of God. True Christianity reveals the sinfulness of man, the church maintains, and emphasizes righteous living, not acquisition and a desire for blessings. The men were subsequently removed from the sanctuary/arena and charged with criminal trespassing. While awaiting their hearing, they shouted sermons and sang hymns in the court house halls. I’ll admit, it’s taken me a few days to find an angle on the events because they are so new and close to home. This is an issue that I’ve encountered often when researching and writing about megachurches—as I try to place them in historical context I have to be aware of and even untangle the political, personal, and cultural influences that I did not confront in the same way with my studies on earlier subjects. Certainly, we always strive for elusive objectivity but I’ve found that with history as it happens (as our friend Phil Sinitiere likes to say) it’s even more difficult to remove yourself from the equation. That being said, I’m going to challenge my scholar brain to historicize June 28 and the two groups involved in the controversy. Here goes.


In a sense (wait for it...) Wells is right. Osteen does motivate his followers and does not deliver the “traditional” evangelical messages. Lakewood and many megachurches like it do steer clear of the hell-fire-and-brimstone messages and focus instead of uplifting their audiences and giving them hope instead of pointing out spiritual shortcomings. Based on its fundamentalist doctrine, I could see where Wells would view Osteen as deleterious to their definition of religiosity. Although especially unnerving because it followed the tragedy in Charlestown, the confrontation at Lakewood does help to reveal a conflict at the heart of the development of megachurches in the South. As these large congregations have started to dominate the religious landscape, smaller congregations have been marginalized in many places and their traditional worship styles subsumed by contemporary praise-and-worship rock bands. Country churches with their white steeples are still around but in smaller numbers and, instead, many southerners are flocking to arenas and large church facilities with youth complexes and coffee shops. Wells is an extremely fundamentalist sect but their attitudes do highlight the ways in which megachurches have challenged evangelical traditions and, in the process, threatened smaller, more conservative congregations.

That being said, it’s not surprising that Wells invaded a megachurch service. The six hecklers from Wells (a congregation of about 70 members in deep East Texas) have held a longstanding suspicion of megachurches and have written about their views on the church website.  In one testimonial about another megachurch in Houston (Sagemont), a Wells member claimed that “[m]ost members there would work hard at their vocations, raise their children to adulthood, and then upgrade to bigger and better homes in more expensive neighborhoods. Most would not treat the grace of God as a reason to deny ungodly lusts and worldliness, but just the opposite, thinking it the way of Christ to gain more instead of die to self more.” The call against megachurches in this instance is ultimately a rejection of the prosperity gospel and the kind of worship experience that it promotes.

The leadership of Wells represents the lingering fundamentalism in southern evangelicalism and they claim an impressive (if problematic) theological lineage. On their website, the congregation makes reference to Wesley, Edwards, and Whitefield (among others) as the fathers of the fundamentalist doctrine to which they ascribe. The connections are blurry and contradictory (maybe they will offer more explanation on their relationship to these figures once the website is finished) but their message certainly emphasizes sinfulness and repentance and their rhetoric is reminiscent of 18th and 19th century jeremiads. I’ve personally encountered Wells street-preaching on the Stephen F. Austin State University campus and at small-town events like the Nacogdoches Blueberry Festival. (Yes, there is a Blueberry Festival. Yes, I ate something fried and drank too much blueberry lemonade. And, yes, the Church of Wells showed up in full force to preach against homosexuality in the middle of a large crowd of over-heated Texans.) When they show up, Wells preachers, male and female, stand on soapboxes painted with the word “Repent!” in large lettering and exhort passersby to give up their sinful ways and join the holy cause. They are a small group but they are determined. It would be easy to dismiss them as an anomaly—they are not part of a movement like Lakewood is, with millions of followers all over the world—but they are adopting certain stylistic characteristics that demonstrate a knowledge of evangelical tactics that have been effective in the past. The Methodist minsters that I studied took it upon themselves (or so they and their hagiographers claimed) to interrupt duels and debate other minsters openly, to visit taverns and stand on tables preaching against the sin of drink, and to enter homes and implore residents to give up their vices. Wells is certainly not Methodist despite their claims to Wesley, but they are borrowing from similar revivalist and preaching traditions. Their antics at Lakewood offers an interesting contrast of the old and the new in southern religion.

Although Wells and other fundamentalist churches make claims to authenticity and historical tradition, megachurches like Lakewood also have traditions or have engaged in retraditioning to reach a 21st century audience. Megachurches have their own lineage in American religious history and since last month’s heckling hijinks, I’ve been thinking about how both groups can claim authenticity and evangelical heritage even though they are so divergent in their doctrines and practices. Putting personal politics and beliefs aside, I see these moments as opportunities to investigate the foundations that lead to religious conflict within a faith group. When I studied and wrote about 19th century Methodism, I encountered schisms, debates, and outright personal attacks that are not that dissimilar from the June 28 event. As a historical moment, perhaps the Wells/Lakewood confrontation can tell us a bit more about the divergent doctrines in southern religion and provide a little bit of insight into the tensions between small/big religion in the region. 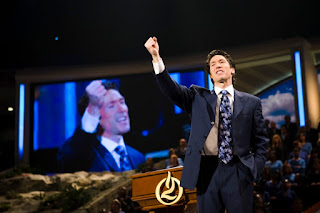 Lakewood borrows from the past but, unlike Wells, is actively engaged with current trends and often influences those trends. Osteen preaches against sin but adopts the neo-Pentecostal approach. He encourages believers to walk the narrow path but to also pray for prosperity in this life (whether it be prosperity in the form of wealth, health, relationships, personal fulfillment, etc.). While Wells is adopting the rhetoric of impending damnation and employs jeremiads to convict potential converts, Lakewood builds believers up and encourages them to see the best in themselves—to look forward to their “Best Life Now” and to seek God’s blessings. In fact, after the Wells interruption, Osteen recovered by not engaging the insults, thanking the congregation for their patience and reminding them that they will "continue to receive what God has for us. It's a good day to be alive." Wells claims an authentic heritage and lays claim to some important spiritual predecessors but Lakewood does not advertise how those who came before influenced the church’s doctrine. Joel Osteen does discuss the impact of his father, John, on the ministry, of course, but he rarely mentions past preachers or movements. Lakewood’s theology is not without historical foundation, however, as it borrows from the charismatic and Pentecostal traditions that have been so expertly described by scholars like Kate Bowler and Scott Billingsley. Osteen’s church and ministry are clear indicators of the extensive growth of neo-Pentecostalism in the late-twentieth century. The popularity or prosperity-based megachurches in 2015 (Lakewood has about 47,000 in attendance every weekend) signifies that the shift towards neo-Pentecostalism or at least large, seeker-sensitive congregations is happening, especially in the South. (Justin Wilford—via Hartford Institute—found that 50% of megas are in southern states as of 2012). These numbers and the radical move away from traditional forms and fundamentalist faith are significant—and that’s why Wells is so anxious.

I think you make a keen observation regarding how the Church of Wells leaders orient themselves to a particular historical-theological lineage; on the church’s web site their cloud of theological witnesses are all male and all white. This calls for a class, race, and gender analysis of the Church of Wells.

And your question about notions of religious authenticity and spiritual heritage (for both Wells, and Lakewood, along with other such congregations), seems to track with what Molly Worthen calls evangelicalism’s “crisis of authority.” Both congregations certainly draw from particular (perhaps even shared) traditions. From my perusal of their web site, testimonies, and videos, the Wells message appears to be that “true” faith must respond to a world and a Christian church in a constant state of crisis and decline. Lakewood’s message is that problems, difficulties, and crises will inevitably get better because of God’s providence, especially if one keeps “an attitude of faith” through positive thinking and positive confession.

In addition, I think you are correct to ask about the Wells-Lakewood episode in light of southern religion. I’m struck by the contrast between Osteen’s emphasis on second chances and the possibility of spiritual makeovers (something I attribute in part to Houston’s culture in Salvation with a Smile), while the Church of Wells seems to offer a second chance so long as one maintains adherence to their particular brand of faith. Perhaps we can connect this to Robert Wuthnow’s notion of Texas’s place as “rough country” in American religion.

While my comments here highlight the seeming contrasts between the Church of Wells and Lakewood, as your post suggests, we can ponder potential parallels between the two congregations by undertaking a deeper, broader historical, cultural, and even theological analysis that can tell us a great deal about this moment in American Christianity, southern religion, etc. In addition, as Mike McVicar and I have discussed recently, I wonder about framing analysis of the Church of Wells as a New Religious Movement?
July 17, 2015 at 8:56 AM

For more on Whitefield and the resulting movements which participated in the 19th-century camp meetings, please visit the website for the book series on Francis Asbury. The Asbury Triptych Series details the early Methodist movement in England and America. The website for the trilogy is www.francisasburytriptych.com. Again, thank you for the article.
July 18, 2015 at 11:32 AM

engaged in retraditioning to reach a 21st century audience

I learned a new word today, more interesting than the incident itself!