With the Independence Day week-end just concluded, I wanted to commend a recent book that speaks to the perennial questions of religion and the American Revolution--S. Scott Rohrer's Jacob Green's Revolution: Radical Religion and Reform in a Revolutionary Age (Pennsylvania State University Press, 2014).

Now, I will be featuring Jacob Green's Revolution prominently in a forthcoming review essay in the Journal of the Early Republic, but let me take a different tact here and suggest that this "microhistory" actually says some very interesting things about the Revolution.

Or, more to the point, the book succeeds by highlighting three individuals whose stories helpfully reveal contrasting religious visions during the founding era.

The first is the book's title character. The Rev. Jacob Green (1722-1790) grew up in Massachusetts and attended Harvard. There, he was caught up in the Great Awakening, fascinated by the theology of Jonathan Edwards, and went on to travel with George Whitefield. In New Jersey, he was convinced to become a Presbyterian minister, and he would spend the rest of his life as a minister in Hanover in Morris County.  As a minister, Green published several widely-read works, most expressing the theological concern for purifying the Church. Among them was a popular tract, A Vision of Hell, imagining the schemes of demons to destroy the church. Its appeal was heightened as it included engravings by the Bostonian Paul Revere. In the first section, Rohrer provides a very good description of Green as pastor. He reads deeply into Green's sermons, both published and unpublished (most were on either the Gospel of John or Acts). So, the book works well as religious history. 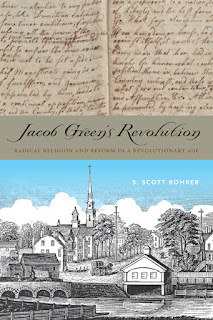 As Green's life moves into the Revolutionary period, Rohrer deftly switches to political history. With the Imperial crisis of the 1770s, Green advocated for Revolution. In 1776 he wrote a pamphlet that proved very important for the Middle Colonies, arguing against Reconciliation with Great Britain. Because of the popularity of that work, he was actually sent to the New Jersey Provincial Congress in 1776. As a politician he did little, though he helped New Jersey overthrow its royal governor and move to put a new, popularly elected government in place. He even chaired the committee that drafted New Jersey’s first Constitution. As the Revolution went on, Green decried moral laxity in citizens and soldiers--he saw this challenge up close, as he hosted 14 soldiers in his home.

As the War wound down, Green once again moved into the role of a reformer. He called for economic reforms with adjustment of the currency and a just fix for the Congress’s financial problems. Paying down the national debt was also a moral concern that Green raised. Green advocated against slavery, adding his Reformed, reforming voice to the calls for emancipation. In religious matters, after the war, he broke his church away from the Presbyterian synod to form an “associated synod of Morris county.” This was more “Consociational”--or, more like the Congregational arrangement of his New England boyhood. He wanted synods to be advisory but for all power to lie with the Congregations; the Presbyterian format was too restricting for him. In his last years, he worked to improve discipline, behavior, and piety in his own congregation--leading to one last revival season before his death.

Simultaneously, in each chapter, Rohrer provides an account of a clergyman on a very different trajectory, Thomas Bradbury Chandler (1726-1790). Chandler also grew up in Congregational New England and attended Yale, but he became convinced that the Church of England was the more faithful expression of the Christian tradition. He decamped to New York City where he could study with Congregational convert to Anglicanism Samuel Johnson. Chandler was ordained an Anglican priest and settled into his parish in Elizabethtown, New Jersey, across the state from Green. In the years before the Revolution, Chandler was a key advocate for an American bishop (which set him in opposition to New Jersey’s patriots). As the Imperial Conflict ramped up, he opposed independence. Since Elizabethtown had a strong Whig contingent, Chandler felt threatened. He fled in 1775, traveling to London, and did not return to America until 1785. In London, he kept pressing for a bishop in America and for help for American refugees. When he returned in 1785 he was in poor health; otherwise he might have become the first bishop in Canada.

These two ministers demonstrate in Rohrer's account contrasting views of politics, society, and religion. Both were within the Christian tradition, but their emphases differed and pulled them in dramatically different directions. Green was a reforming Presbyterian, a traditionalist looking to renew society. In his politics, he synthesized Christian, republican, and classical influences to make a compelling case not only for independence but for a moral and responsible republic. (Here it might be noted that I did not find Rohrer's description of Green's politics as simply Lockean compelling.) Rohrer shows how powerfully New Jersey Presbyterians came in for the American Revolution.

By contrast, Chandler drew on the Anglican appeal to the authority of Church and Monarchy. Before the Revolution, Chandler had been a great advocate for an American Bishop, which he believed would strengthen the standing of the Anglicans in America. In the ferment of Revolution, he found the patriots to be nothing less than rebels. It's perhaps no surprise he earned the opprobrium of his Whig neighbors.

I also found compelling Rohrer's account of a third figure in the book, Jacob's son Ashbel. Knowing his father explains a lot about Ashbel Green’s upbringing and theological outlook. During the Revolutionary War, Ashbel joined the New Jersey militia and was involved in combat. Ashbel entered Princeton in 1782, studying with John Witherspoon. He graduated two years later and married into the Stockton family. He quickly gained prominence as Presbyterian preacher. From that position, he eventually came to head Princeton College and then form Princeton Seminary. Rohrer suggests that many of Ashbel’s concerns were inspired by his father’s interests.To my mind, then, Ashbel offers a great figure bridging the religious world of the Revolution with the religious and political world of the early republic. Not surprisingly, Ashbel Green was a Federalist.

Together, then, these three lives help limn competing perspectives from the Revolution into the Early Republic. They demonstrate the contrasting strains of beliefs and influence that pulled people in various ways during the Revolutionary struggle. Understanding the experiences of people on both sides of such a momentous conflict is perhaps a useful undertaking as the nation has been celebrating its 239th birthday.
Email Post
Labels: Anglicans Jonathan Den Hartog's posts presbyterians religion and the american revolution

Freeborng said…
Thank you, Jonathan, for the post on the Jacob Green book. Interesting insights. The three preachers actually reflect the common citizens of the period. Many were torn, pulled in both directions or one direction completely. I believe only about 13% of the population was completely for independence. At some point, this minority did "turn the tide" so to speak. For me, a Christian with a strong leaning for the Biblical reasons for separation from England, (The book of Romans on Government being an agent of good and not for bad. I think this is also covered in depth in a John Witherspoon sermon), it is hard to see the other side of the issue. Especially when you consider that most of the Anglican leadership in England and America had sold out, aiming less for the spreading of the Gospel and more for personal political and social gain.

If you interest in more on this Anglican issue of the mid to late 18th century, please visit the website for my book, Black Country, the opening book in the trilogy about Francis Asbury. The Asbury Triptych Series opens in England. A young Francis Asbury is mentored by the brothers John and Charles Wesley, George Whitefield and other key leaders of the Methodist movement in England. The website for the book series is www.francisasburytriptych.com. Enjoy the numerous articles on the website about the period.
July 7, 2015 at 7:08 PM