Honour Due to All Men: Lucretia Mott on William Ellery Channing

One of my current projects, with co-editors Christopher Densmore, Nancy Hewitt, and Beverly Palmer, is an edited collection of Lucretia Mott's speeches and sermons, currently titled Lucretia Mott Speaks (we hope to send the manuscript to University of Illinois Press by the beginning of fall semester--wish us luck!). As a Quaker, Mott did not write down her words, so we have collected reports of her speeches from newspapers, pamphlets, meeting records, and phonographic (shorthand) transcriptions. Of these, we have selected sixty speeches, eleven more than appeared Lucretia Mott: Complete Speeches and Sermons (1980). Another important difference between our volume and this earlier one will be the annotations. Aside from Biblical quotations (far too numerous to annotate), we identify individuals, events, etc. to illuminate Mott's political, social, and religious networks. Mott had the Bible memorized, and could quote it at will. Another of her frequent references, however, was to Unitarian minister William Ellery Channing (1780-1842), and in particular, his sermon "Honour Due to All Men." Even a quick read indicates why Mott found this sermon so appealing. 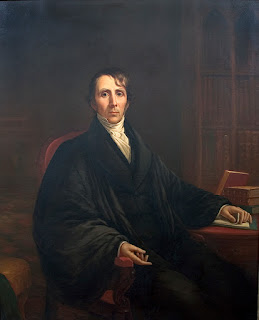 As the title indicates, Channing's sermon made a democratic appeal for equality. According to Channing, Christianity had instigated a "mighty revolution," but one that was still in progress. He lamented that "mutual respect" and "love" had yet to be established among ordinary men (and women). Instead, "great men" received all the honors, and the old hierarchies, enforced by "instinct, interest, and force," continued. Channing envisioned a time when, like Christ, humans would willingly "suffer, and if need be...die for our fellow-creatures." They would only do so when they recognized the "immortal power," the "rational and moral nature," in every individual. The individual soul, and their spiritual potential, in Channing's view, made "all men essentially equal." Though he does not mention either of Mott's two principle causes--abolition and women's rights--in this speech, by the end of his career he endorsed both the anti-slavery movement and women's right to participate.

Mott embraced Channing's egalitarianism. The two passages from "Honour Due to All Men" that Mott quoted offered support for her own view that the inward light was something more than a Quaker doctrine:


I refer to the sense of duty, to the power of discerning right, to the moral and religious principle, to the inward monitor which speaks in the name of God, to the capacity of virtue or excellence....

The idea of right is the primary and highest revelation of God to the human mind, and all outward revelations are founded on and addressed to it. All mysteries of science and theology fade away before the grandeur of the simple perception of duty, which dawns on the mind of the little child.

Channing's (and Mott's) belief in this essential equality led them to re-imagine society. For Channing, equality meant education so that "every human being" could live up to his or her potential. It meant that humans had an obligation to help the "ignorant, poor, and depraved." He also argued that governments (and he had his eye on Europe revolutions throughout the sermon) were intended to "guard the rights of all." For Lucretia Mott, it meant that slaves and women must be acknowledged as equals and their status transformed.

Though they shared a radical belief in human equality, Mott did not agree with Channing about everything. In an 1873 speech to the Free Religious Association (to be included in the volume), she recalled a visit from Channing during which the two religious leaders discussed heaven. Channing suggested that human progress might continue in the afterlife, and Mott replied that his views were mere speculation, and she wanted to "tread under foot our speculations." Mott argued that "we must rest content with the limited knowledge we have, and be confident, by fullness of faith, that that which is best for us shall and will be ours, while we do not endeavor by our speculations to make out or build up a heaven." Channing had rejected notions of men as sinners, but he had not rejected all elements of the old theology. For Mott, Channing and his fellow Unitarians, despite their liberalism, maintained their exclusivity and hierarchy. A true religion must reflect the "Honour Due All Men" (and, for Mott, women) described in his sermon.

Mott's ongoing theological dialogue with Channing is evident in her speeches from the 1840s through the 1870s. In Channing, Mott found someone who shared her profound faith in human equality. She cited him as a religious authority, but also to remind Unitarians and other religious liberals how far they had to go to achieve a truly egalitarian society.
Email Post
Labels: 19th Century carol's posts gender and religion human rights liberal religion Quakers unitarians