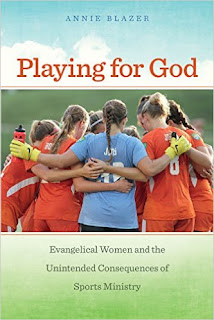 Annie Blazer's Playing for God: Evangelical Women and the Unintended Consequences of Sports Ministry (New York University Press, 2015) is a much-needed book that I hope will be widely read. Expanding on a dissertation she completed in 2008, Blazer, a professor of religious studies at William & Mary, brings the world of evangelical sports ministry to life with an insightful historical and ethnographic study that focuses on sports ministry's largest demographic: women.

Blazer frames her book as "a case study of how evangelical engagement with popular culture created the possibility for reevaluating orthodoxy from inside the tradition." Along with her ethnographic work, she makes a change-over-time argument by contrasting the original aims of the founders who launched the Fellowship of Christian Athletes (FCA) and Athletes in Action (AIA) in the 1950s and 1960s with the current aims (and results) of sports ministry organizations. Basically, she argues that sports ministry organizations originated in the post-World War II years from those moderate, culturally-engaged fundamentalists we often call neo-evangelicals. The aim at first was to harness the celebrity of athletes for the purpose of evangelizing. Over time, however, the emphasis shifted away from witnessing through proclamation, to witnessing through one's actions and attitudes on the field. The experience of sport also increasingly became a way for individuals to connect intimately with God. According to Blazer, those shifts have had unexpected consequences, particularly as evangelical women became more and more involved in athletics.

The heart of Blazer's book, and its great strength, is her ethnographic work on female athletes' participation in three contemporary forms of sports ministry: an FCA summer camp, a traveling AIA basketball team, and a semi-professional evangelical soccer team, the Charlotte Lady Eagles. Weaving descriptions, observations, and analysis from her field studies into her narrative, Blazer's writing flows easily and is a pleasure to read. She even manages to incorporate humor. Take, for example, Blazer's description of a scene from an AIA exhibition game against Liberty University and the Frazee triplets (Blazer does not use the real names of opposing teams or players in her narrative):

"I watched as the triplets on the opposing team played systematically, consistently stealing the ball and making baskets. I could not help but think that this must be the stuff of basketball nightmares. Every direction you pivot, you see the same very tall, very talented, ponytailed player ready to take the ball away from you."

As one might expect from a book about athletes, bodies are crucial to Blazer's analysis. She argues that we should view evangelical athletes' embodied experiences as sites for the creation of religious knowledge and certainty. Through intense practice and competition, evangelical athletes are taught to "experience transfiguring belief" in a way similar to the "speaking is believing" concept. But the forms of religious knowing that evangelical women have developed through this engagement with sport have been more flexible than sports ministry leaders intended. Female evangelical athletes have subtly challenged standard evangelical tenets in regards to gender and sexuality, creating an "expanded and complicated [evangelical] orthodoxy" by expressing ambivalent attitudes towards same-sex relationships and by leaning towards gender equality in marriage. 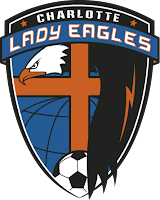 Blazer heavily emphasizes themes of gender and sexuality, buttressing her arguments with careful analysis of interesting ethnographic material. One of Blazer's most poignant stories was her description of the divergent paths taken by two Lady Eagle players who had a brief closeted romantic relationship. One, married to a man at the time, eventually left the team and rejected the Lady Eagles' condemnation of homosexuality. She divorced her husband and entered into a relationship with a teammate on her new soccer team. The other stayed within the evangelical sports ministry world. Despite continuing to experience same-sex attraction, she pursued a straight lifestyle. Blazer uses their stories to illustrate the complex approaches female evangelical athletes take on the issue.

I did wonder, at times, how much credit should be assigned to sport itself for the supposedly more flexible views on gender and sexuality among evangelical athletes. I am convinced by Blazer's work that the embodied experiences of sport create religious meaning for many evangelical participants. But it seems that younger evangelicals as a whole have taken ambivalent stances on the issues that Blazer highlights. If a similar flexibility exists among non-athlete evangelicals of the same age, education level, and economic class, then perhaps the unintended consequences that Blazer highlights have less to do with participation in sport itself than with broader cultural trends.

A more pressing question for me came from Blazer's description of the early history of sports ministry organizations. Blazer (and nearly every other scholar who has written on the subject) lumps FCA, AIA, and other sports ministry organizations into a homogenous conservative evangelical mold, and then projects that mold back onto FCA's 1954 founding. For example, Blazer argues that FCA, following in the footsteps of Bill Bright's Four Spiritual Laws, was "born of celebrity sales power and the standardization of the gospel message." The former is undoubtedly true. But I'm less sure of the latter. In the beginning FCA leaders actively recruited and featured Catholics, Mormons, liberal Protestants, and conservative Protestants. Since FCA was built at first to incorporate these multiple theological viewpoints and orthodoxies, the organization does not fit well as a starting point for an "evangelical orthodoxy" or as representative of postwar neo-evangelicalism. And if FCA and AIA cannot be lumped together in the 1950s and 1960s as homogenous evangelical sports ministries, then Blazer's change-over-time arguments are not as compelling, or they at least need to be adjusted chronologically and given more nuance.

But while I did not entirely agree with Blazer's description of FCA's (and thus, sports ministry's) early years, I learned a great deal from Blazer's discussion of sports ministry in the late 1960s and early 1970s. One of my favorite sections here was her analysis of the theology of sport developed by Wes Neal. Neal, a weight lifter with AIA in the 1960s, is a prominent figure within the Nebraska FCA circles that I grew up with. In the 1960s he grew frustrated with AIA's separation between the act of lifting weights (the "secular" activity used to draw a crowd) and the act of sharing the gospel (the "spiritual" activity that justified the secular one). Seeking to link the two, Neal tried to figure out how to "lift weights God's way" by making the performance of sport an act of worship to God. Blazer carefully analyzes Neal's theological claims, arguing that Neal helped to shift sports ministry's focus from using sports as an evangelistic tool to using sports to help athletes connect intimately with God.

For scholars of contemporary American Christianity, this book should hold obvious interest. As John Turner has pointed out with his work on Campus Crusade for Christ, we need to look more closely at the places and spaces within post-World War II student culture in which Christian (and other religious) organizations have thrived even as educational and public institutions have supposedly become more secular. Sport provides one such understudied space. So, too, Blazer's focus on questions of gender and sexuality make her book a great fit to go alongside recent work by Heather White, Anthony Petro, and others. Finally, Playing for God is essential reading for the small-but-growing group of scholars focused on religion and sport. Here's hoping that the quality of Blazer's work is a harbinger what's to come as that subfield expands.
Email Post
Labels: book reviews gender and religion new books putz religion and sexuality religion and sport