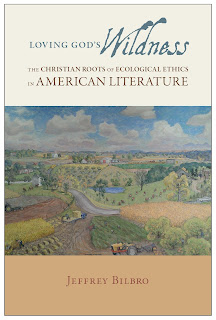 The following is an interview with my friend and colleague  Jeffrey Bilbro.  Jeff is an Assistant Professor of English at .   He is a prolific blogger, the author of numerous articles, and co-author with Jack Baker of An Agrarian Hope for Higher Education: Wendell Berry and the University (forthcoming from the University Press of Kentucky).  Our conversation below concern’s Jeff’s first book, Loving God's Wildness: The Christian Roots of Ecological Ethics in American Literature ( Press, 2015).

What stimulated your interest in environmentalism (if you would call it that)?

It’s hard to pinpoint an origin, but one formative experience for me was spending a year in the remote community of Stehekin when I was eleven. Stehekin is surrounded by the and is inaccessible by car; to get there you have to take a boat or plane. Only about 100 people live there year-round. It’s a spectacularly beautiful place, and we took lots of hikes in the surrounding mountains.

Even more than the glamorous scenery, however, what drew my attention were the resourceful, creative, difficult ways in which the residents made a living in this remote place. Their pragmatic efforts to survive here inevitably came into conflict with various National Park Service policies. Because these policies were determined in some centralized bureaucracy, they often didn’t fit the local reality. So while I learned to value the beauty of seemingly untouched, pristine wilderness, I also came to see the ways in which wilderness preservation and land use can clash, which as I learned in my research for this book is one of America’s enduring conflicts.

To circle back to your question, I avoid using the term “environmentalism” because it simply means “surroundings.” Wendell Berry points out that when we use this term, we imply that humans and other organisms can be separated from their surroundings, but in fact, humans can’t survive if we’re severed from other life forms. Furthermore, “environmentalism” seems to lead to efforts to preserve “wild” places in some other state or country, to save particular species, or to keep humans from messing up their surroundings.
The more important and difficult question, however, is how do we live with the other members of our places in ways that enable us all—human and non-human—to flourish? Thus questions about proper land use are historically much more important and difficult—and interesting—than merely setting aside sections of an apparently untainted environment. The word that suggests the scope of these questions best is “ecology,” which comes from the Greek word oikos that simply means “household.” We derive both “economy” and “diocese” from this same root, and these related words indicate both the practical and religious implications wrapped up in how we live with the other members of our biological household.

What do you see as the Puritan contribution to American thinking about nature?

The Puritans were religious and they were capitalist (or proto-capitalist) colonists. So they were torn between a desire to serve God, and a desire to make a lot of money. That tension pretty much sums up the history of how Americans relate to nature.

In the introduction I relate a story that Cotton Mather tells about a Puritan minister who was trying to convince a new group of settlers to take their faith more seriously. One of them apparently stood up in the middle of the sermon and tells the preacher he’s got the wrong group: these settlers came to the colonies to catch fish, not to found some religious city on the hill. The irony is that Mather goes on to point to this group’s financial failure as evidence that God judged them. So Mather sees financial success as a mark of divine favor. This belief ends up validating all kinds of ecological damage in the name of monetary gain; as another Puritan historian puts it, the Lord’s favor is revealed by the Puritan colonists’ success in turning the wilderness into “a mart for Merchants.”

At the same time, however, Mather and other Puritans sensed a religious value in creation. Mather writes a whole book about natural philosophy in which he calls creation “a ” in which humans are responsible to fulfill the role of priest. This understanding implies a much more extensive ecological ethic than the view that creation is a set of raw materials we can manipulate to enrich ourselves. These same dualistic views of nature run throughout ’s history.

Why Henry David Thoreau, John Muir, Willa Cather, and Wendell Berry, and how did they together “reshape Puritan dualism?”

There are certainly other writers who could helpfully expand the narrative I relate in this book—Aldo Leopold, Annie Dillard, and Barbara Kingsolver, to name three. I chose the four authors I did because they each recognize the dualism that has plagued American attitudes toward nature and propose different imaginative responses, ones tuned to their particular moments in history. Thoreau and Muir focus more on preserving wild areas, and Cather and focus more on ethical land use, but all four make room for a continuum of ecological relationships.

One key point of agreement that all four authors share is the inadequacy of money as an economic—and ecological—standard. Thoreau devotes the longest chapter in Walden to the subject of “Economy,” and writes at great length about the “two economies,” the industrial, cash economy vs. the “,” which is an economy that “includes everything.” All these authors recognize that if people are going to treat the natural world differently, they must first value it differently—value it as God values it and not for how it can be useful to them. Their writings, then, work to expand the ways we assign value. Their hope would be that eventually, maybe, we can learn to judge the success or failure of our lives not just by how many fish we catch or how much money is in our bank account but by the flourishing of the ecological communities in which we live.

You conclude that “like priests who serve the Eucharist, humans can never be the source of ecological redemption but can only hope to serve God’s redemptive work. . . . God remains wild, and the wild economy of which we are a part remains beyond human knowing” (p. 182).  Isn’t that to return to the kind of fatalism that the Puritans specialized in?  Why is it important to stress god’s “wildness?”

I hope not; I hope it’s humility, not fatalism. The tension that I see running through all these authors—the tension the Puritans failed to adequately acknowledge—is that wild ecosystems follow complex yet mysterious patterns. By studying these carefully, humans can learn to participate in them more responsibly, but we’ll never be able to fully predict or control the order inherent in the household of creation.

One of the biblical stories that these authors return to for guidance on this question is the . If is the garden where humans got it wrong, is the garden where Jesus models the right approach. And what Jesus models is an active submission to a plan he either doesn’t fully understand, or doesn’t really want to follow. The human role as members of God’s household or oikos, then, entails a more humble, obedient mode of ecological participation than Americans have practiced thus far.

To paraphrase my conclusion, I think the real question is whether Americans can avoid the Scylla of thinking money is the only standard of value and that it justifies any ecological degradation, while also avoiding the Charybdis of thinking that any use of natural resources is sinful and the only real standard of value is untouched wilderness. Can Americans see themselves neither as the elect who are entitled to boundless material prosperity, nor as the hopelessly fallen who are in need of untainted wild creation to redeem them? I’m not sure, but these authors at least help to clarify these twin pitfalls.

Why should scholars of American religion read this book?

Following the publication of Lynn White’s essay “The Historical Roots of Our Ecological Crisis,” the narrative that religion, and Christianity in particular, leads people to devalue their environment became standard. This is an odd historical irony for two reasons. The first is that White’s history of religion has been thoroughly contested by subsequent scholars, but the second is that White himself claimed that American culture needed a religious solution to the religious roots of ecological degradation. So I think it’s time that historians and other scholars consider the ways theology has shaped American ecological attitudes and practices. Fortunately, there’s some great work on this being done now. Mark Stoll’s new book, Inherit the : Religion and the Rise of American Environmentalism, came out last month, and his narrative offers a complementary perspective to the one I tell in my book.
Email Post
Labels: author interviews new books religion and literature religion and the environment