Today I interview Dr. Sean McCloud about his new book American Possessions: Fighting Demons in the Contemporary United States (Oxford University Press, 2015). He teaches religious studies at the University of North Carolina Charlotte, where he also directs graduate studies in the Religious Studies department. Dr. McCloud is the author of numerous books and articles, including Divine Hierarchies: Class in American Religion and Religious Studies (University of North Carolina Press, 2007).

Phillip Luke Sinitiere (PLS): The short title of your book, American Possessions, speaks to the larger contours of your scholarship and marks your book’s subject as both “religious” and “material.” As someone who has convincingly called scholars to consider the material and class dimensions of American religion, can you unpack the title of your book with a view to articulating its main argument?

Sean McCloud (SM): First Phil, thank you for these questions, and thanks both to you and the folks at Religion in American History for kindly expressing interest in American Possessions. In the short title of this intentionally short book (intended, among other things, to mirror the length of a spiritual warfare manual), I hoped to evoke two meanings for “possessions” that point to the work’s themes. Overall, I suggest that U.S. religious culture in the twenty-first century can be characterized as immersed in and constitutive of an era of possessions—on the one hand of consumer goods, objects, and technologies and, on the other, of spirit entities such as demons and ghosts—and that Third Wave Evangelicalism and its practice of spiritual warfare provides a case study through which these trends converge. I have always been interested in how those things scholars and practitioners define as “religious” are always deeply intertwined with and dependent upon the historical moment that they exist within, and how that historical moment’s material conditions and social structures push, propel, encourage, and discourage particular ideas and activities. I see Third Wave spiritual warfare as one social formation that registers some of the most prescient themes and social/historical forces in contemporary American religion. 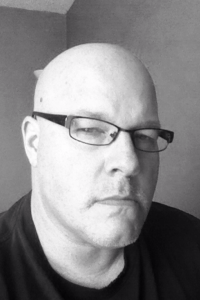 PLS: Can you discuss the documentary basis of American Possessions—the spiritual warfare guides and handbooks? I’m interested to hear more about the discourse these manuals present on deliverance, rituals of “spiritual housekeeping,” and “spiritual mapping,” along with the assumed presence of “demons” that ties these Third Wave concepts together.

SM: There are hundreds of spiritual warfare books out there and the meanings of that term can vary between different groups of evangelicals. My specific focus is on Third Wave spiritual warfare.“Third Wave” is a term coined by former Fuller Theological Seminary Professor C. Peter Wagner in several articles and books he wrote in the 1980s. The name described what he and some of his colleagues viewed as a new evangelical movement of the Holy Spirit—the latest in an historical succession with two previous “waves,” the birth of Pentecostalism at the turn of the twentieth century and the charismatic movement of the 1960s and early 1970s.

Demons are real for this group. They aren’t metaphors or symbols for something else. As I write in the book, without the demonic there would be no Third Wave spiritual warfare. First, demons provide a material and spatially-located form of theodicy, explaining why certain places, objects, and people have been witness to tragedy and sin. Events and phenomena as variant as plane disappearances in the Bermuda Triangle, the 2010 Haitian Earthquake, haunted houses, generational alcoholism in families, and national financial crises are all explained via some combination of human sins and demonic activities. Second, demons are the focal point of attention and attack in spiritual warfare. Because Satan and his evil spirits stand between the individual and her salvation through Jesus Christ, expelling demons from people, objects, and places is the goal of spiritual warfare practices. Third, and most broadly, in asserting the reality and even physical presence of demons, one simultaneously asserts the reality of the entire Third Wave theology of God, Satan, and the spiritual world. 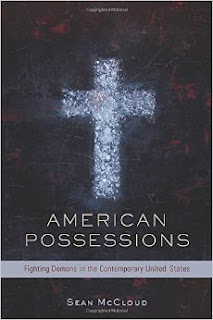 The primary textual sources that I examine in American Possessions are the handbooks—called by their authors "training manuals, "how-to" tomes, and "practical guides"—that teach practitioners how to conduct spiritual warfare against Satan and his soldiers, who are busy tormenting individuals (ground-level warfare), infesting groups and movements (occult-level warfare), and negatively influencing entire cities, regions, and nation states (strategic-level warfare). To combat the Devil and his minions, these battle manuals show three primary methods for interceding in the supernatural war being waged on earth. First is deliverance ministry, a uniquely evangelical Protestant ritual designed to banish demons from individuals’ bodies.Second is a genre concerned with “spiritual housecleaning” that features ritual practices focused on liberating personal objects, consumer items, homes, and property believed to be demon-inhabited. Third is the practice of “spiritual mapping,” a Third Wave version of geomancy that discerns where and why demons control spaces and places, ranging from houses and neighborhoods to entire countries. Spiritual mapping entails researching a place to understand its history in relation to evangelicalism and other religions and praying to God for divine guidance in seeing “spiritual realities” missing in the historical record.

PLS: You innovatively invoke a sonic reference—“reverberation” (p. 109)—to articulate the relationship you see between demons, possessions, and neoliberalism. How does a focus on the therapeutic, the consumerist, and the haunted spotlight entanglements of religion (especially Pentecostalism), class, and identity in our contemporary moment?

SM: The loose-knit conglomeration of evangelicals that make up the Third Wave embrace neoliberal ideas of human free will, individualism, globalization, free market capitalism, and the political and commercial agents and structures that promote such things. Given this, it should not be surprising that Third Wave ideas about economics, their language about legal rights, and promotion of spirit over matter—in addition to their conception of humans as autonomous and freely-willed—closely resemble neoliberal conceptions. In parallel but differently detailed ways, both neoliberalism and Third Wave spiritual warfare dematerialize the world by denying the power of the social and material differences spurred by socioeconomic structures, but also class, race, gender, and other historically embodied variables. I wanted to find a way to describe this that wasn’t too simplistically structural, while simultaneously being materialist about it and acknowledging that the social world and its material realities are what enable and constrain our actions and thoughts. In terms of “reverberation,” I am constantly listening to music and I also make my own and play guitar in a band. So, in thinking about something as abstract as social structures, economic systems, ideologies, and their material and historical effects, it was a concept that made sense to me because it was already a part of my daily life. I hope that it works for those who read the book. Reverberation is the continuation of a musical note or sound that persists after the act that made the initial tone has ended. In trying to describe how neoliberal ideas and institutions are registered in Third Wave spiritual warfare, I envision the following:


Imagine an electric bass guitarist and drummer together in a small, echoey room. In the song they are about to play, the bass guides the piece's structure.  Also, the bass guitarist has tuned her strings to lower octaves, which not only makes the notes rumble but—when run through her loud, high wattage tube amplifier—assures that a single string pluck creates a long sustaining hum that thunderously reverberates throughout the band practice space. It vibrates the metal rattles on the bottom of the snare drum, which then registers the bass hum by making its own sound (even though the drummer did not hit the snare); The drum is independent of the bass guitar. It makes its own sounds when the drummer strikes it with her stick. But the drums follow the bass's lead in the song. In addition, the force of the bass guitar sustain in this case is so powerful that its activities bleed into the snare, shaping and adding to the drum’s sound even when it is being played. I suggest that the structures of late modern neoliberalism—like the bass guitar—thunderously reverberate throughout the Third Wave movement, shaping the movement's cadence to greater or lesser effect in different contexts. (p. 109)

So, like the snare drum resonating because of the heavy bass, Third Wave evangelicalism is not just some inanimate object moved by the forces outside of it, but rather a part of neoliberalism's ensemble that fills out the sound. And in this—as well as in its specific engagements with the supernatural (“the haunted”), consumerism, therapeutic idioms, globalization, and the notion of atomistic freely-willed individuals—it looks like much of the rest of contemporary American religion.

And yet, at the same time, the demons of the Third Wave imaginary suggest some ambivalence toward late capitalist/neoliberal ideas. In the conclusion, I write:


In an era in which one prominent view of the individual is that of an agent separable and unaffected by his past and social locations (and always improvable through therapeutic methods), spiritual warfare theologies suggest that evil spirits recurrently torment some people because of past sins that they just can't shake. In a time when we increasingly believe that our identities are achieved rather than ascribed, Third Wave writers declare that one often inherits demons from his ancestors. In a period of accelerated globalization, the exciting possibility of evangelizing the world comes to Third Wave members with a cost: encountering demons associated with other peoples' cultures and religions.  And while many Third Wave writers earnestly proclaim that God prefers free market capitalism, they also warn that the consumer objects and properties made available by the market frequently house Satan's minions and thus make capitalist consumption potentially perilous to one's soul. Spiritual warfare’s battles with demons, played out in the symbolic (and very material) field of the Third Wave evangelicalism, suggests a haunting attraction and repulsion toward the very same late modern social formations from whence it emerged and helps sustain. (p. 116)

PLS: What projects are next for you? What are you working on?

SM: Most immediately, I am contributing a couple chapters to others’ edited books, including one titled “Everything Blended: Combining and Improvising as a Constant in American Religions,” and another called “Class as a Force of Habit: The Social World Embodied in Scholarship.” In terms of long term research projects? You might say that right now I’m just waiting to see what possesses me.