Skip to main content
Labels
Posted by Cara Burnidge May 23, 2015

David Sehat on The Jefferson Rule

Today's guest post comes from David Sehat. David is an associate professor at Georgia State University and author of The Myth of American Religious Freedom. Readers of the blog will probably recall that Paul was quite excited about this book's release. He interviewed David in anticipation of Myth's publication, he announced when it was published, he alerted us to the extended conversation about it and he celebrated when the RiAH bump was confirmed David won the much deserved Frederick Jackson Turner Award.

With this post, the tradition of featuring David's work continues as he gives us a look into his new book The Jefferson Rule: How the Founding Fathers Became Infallible and Our Politics Inflexible. Readers can find new interviews with David about his work here and here as well as his S-USIH post about "Why We Should Stop Talking about the Founding Fathers." 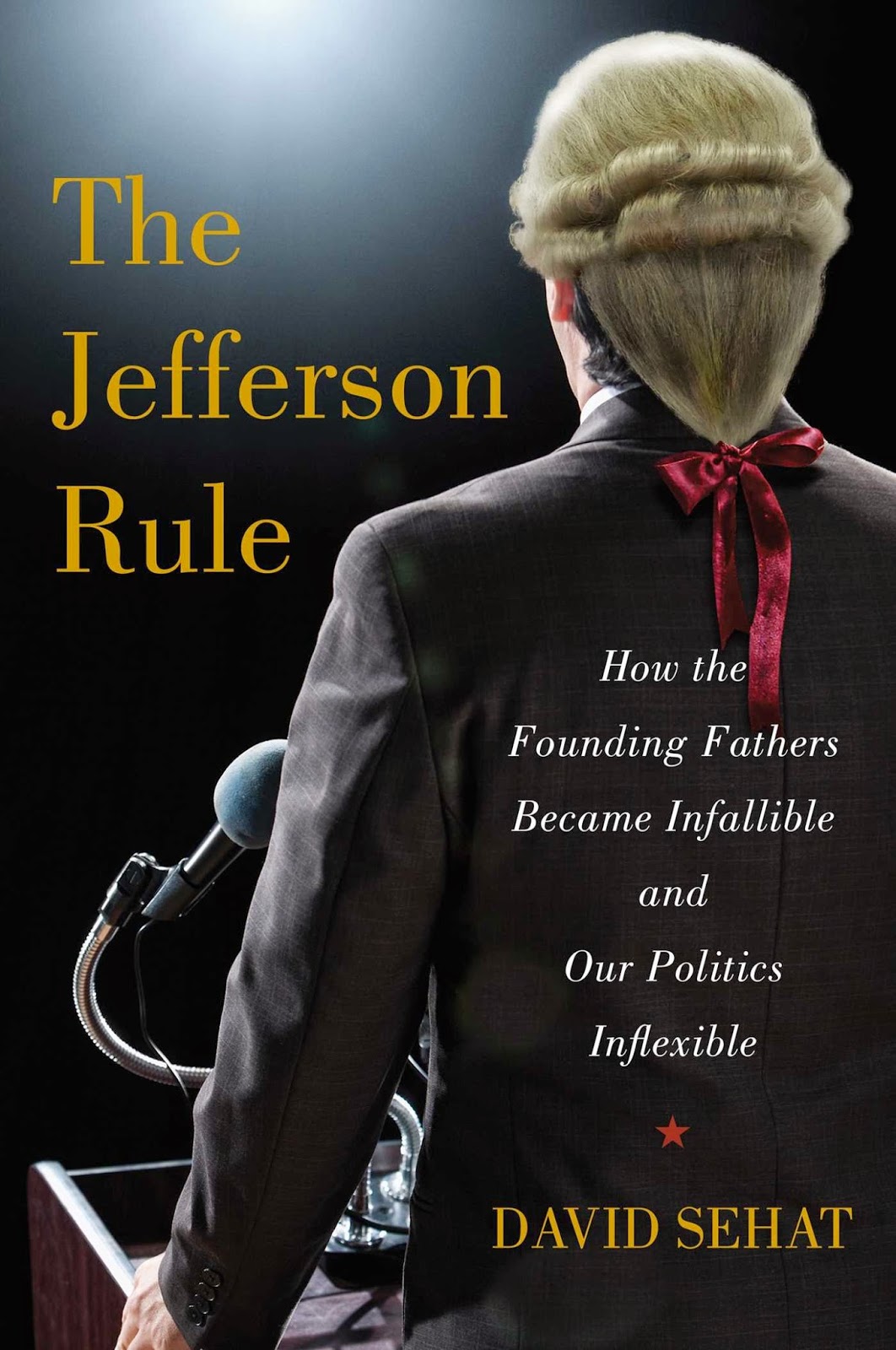 American politics is often like religion.  It is an arena of orthodoxies.  It employs liturgies for different occasions.  It leans upon a secular priesthood to run its affairs.  And, above all, it promotes veneration of the sacred.  Sometimes the notion of the sacred is attached to the nation, which is understandable even if it is not something that I feel.  But what I find more remarkable is that American politics promotes the veneration of the Founding Fathers.  That “assembly of demigods,” in Thomas Jefferson’s phrase, has been given supernatural wisdom, uncanny virtue, and sagacious foresight into the distant future.  They have become the phantasmagorical leaders of the American revolutionary promise and the architects of the American creed.

Their mythos began just a few years after their death. In the 1840s, as he was beginning to edit his grandfather’s papers, Charles Francis Adams complained, “We are beginning to forget that the patriots of former days were men like ourselves. . . . We are almost irresistibly led to ascribe to them . . . certain gigantic proportions and superhuman qualities.”  As the Founders actual lives faded into the past, he realized that popular memory filled in the gaps in often astounding ways.

Consider the case of George Washington.  His myth began with his body barely in the ground.  “Washington, you know[,] is gone!” the writer Mason Locke Weems exclaimed to his publisher when he heard the news.  “Millions are gaping to read something about him.”  Fortunately, Weems claimed to have begun collecting tales about Washington six months past and was ready to satisfy popular demand.  The resulting book, which was based on evidence that was slim at best and more often simply fabricated, solidified Washington’s reputation not as a remote and stoic political leader in a deferential age (which he was), but instead as an honorable, virtuous, and sentimentalized Christian.  Weems claimed to be rejecting “Washington the hero, and the Demi-god” for Washington the real man, but he offered a version of the man who was just as heroic in many ways.  Here is the origin of the bizarre tales of Washington’s boyhood, including the one of him cutting down his father’s cherry tree.  When confronted by his father about the tree, Weems has Washington responding, “I can’t tell a lie, Pa; you know that I can’t tell a lie.” Washington then confesses to cutting down the tree, and his father rejoices in the opportunity to see his son’s immaculate honesty.  (It was this story that prompted Mark Twain to claim of Washington: “He was ignorant of the commonest accomplishments of youth.  He could not even lie.”)

Such fabulist and often facile tales became so commonplace over the next 100 years—and included more than just George Washington—that historians were often agog at the level of fabrication.  As the historical profession became organized in the 1890s, books began appearing that claimed to unearth The True George Washington or The True Benjamin Franklin from the accretive layers of popular myth.  The authors of such works often complained that the hagiographers of the Founding generation, such as Mason Locke Weems, lacked any proper sense of history. Sydney George Fisher, the author of The True Benjamin Franklin, was so exasperated that he opened his book with a little homily on the differences between the mythos of the Founders and that of the ancients, especially the Greeks.  Ancient people always made their gods more human than not, he claimed, but “our process is just the reverse.” “Out of a man who actually lived among us and of whose life we have many truthful details,” he grumbled, “we make an impossible abstraction of idealized virtues.”

Yet these academic treatments could not keep up with popular myth. By 1916, when Warren G. Harding coined the phrase “the Founding Fathers” in his address to the Republic National Convention, the rage for the Founders was only growing. His new phrase simply offered a novel expression for the old attitude of veneration, and Harding actually did much to promote the cause, most prominently in his inaugural address in 1921. “Standing in this presence, mindful of the solemnity of the occasion, feeling the emotions which no one may know until he senses the great weight of responsibility for himself,” Harding intoned, “I must utter my belief in the divine inspiration of the founding fathers.”  It is a sentiment in complete accord with the Tea Party Republicans of today.

There are various ways to respond to such talk.  Sydney George Fisher eventually threw up his hands. In an article entitled, “The Legendary and Myth-making Process in Histories of the American Revolution,” Fisher realized that he was not up to the task of correcting factual misconception. Writers like Mason Locke Weems might offer “trash and cant,” he said, but “it is in vain that the historians, the exhaustive investigators, the learned, and the accurate rail at him or ignore him. He captured the American people. . . . He said exactly what they wanted to hear.”

I suppose I am not so ready to give up the fight.  It should go without saying that the Founders were not an assembly of demigods.  They were human beings who wore dentures, had bad breath, and suffered from the various gastro-intestinal disorders of the age.  They displayed the limited horizons of their place and time—with the usual notions about the place of slaves, women, and others outside the body politic.  The attitude of reverence seems to me inappropriate given the Founders’ striking limitations, which are understandable in human beings but unacceptable in objects of veneration.  That reverence, to put it more strongly, is a form of political fundamentalism, and the effect is, as Henry Clay complained in 1820, to make all the Founders’ opinions ”the articles of faith of the new Church.”  Given all the challenges we face today—global warming, international terrorism, pandemics, species loss, political corruption, and so on—I vote that we jettison our obsession with the Founders and instead plunge into addressing the new realities of our time.

Tom Van Dyke said…
Given all the challenges we face today—global warming, international terrorism, pandemics, species loss, political corruption, and so on—I vote that we jettison our obsession with the Founders and instead plunge into addressing the new realities of our time.


Then let the left be honest that it washes its hands of the Founders. Let the "Tea Party Republicans of today" claim them--if they can.
May 23, 2015 at 5:36 PM