I'm taking time today to interview a scholar of gender, Pentecostalism and performance theory is a great pleasure!  Where were all these neat theoretical ideas when I was writing my dissertation?  This is Leah’s first book, for readers contemplating adding readings, or better yet, assigning a new text that covers gender, Pentecostalism, and performance…you would do well to consider dropping a few bucks on Leah’s book & for those of us who perpetually lament the lack of women scholars on our reading lists, in our libraries and in our mutual networks---a chance to put your activism into action. 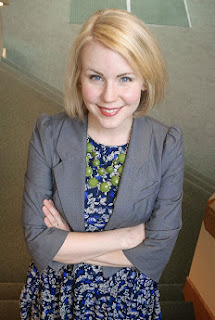 5 Questions for Leah Payne on her new book Gender and Pentecostal Revivalism: Making a Female Ministry in the Early Twentieth Century, life in the academy, & the X-Files re-boot.

Leah Payne received her Ph.D. in History and Critical Theories of Religion from Vanderbilt University in 2013. She is a Louisville Institute postdoctoral fellow in American Religious History and Women’s Studies at George Fox University in Portland, Oregon. Her research interests include American religious innovation, gender, race, and class construction, performance theory, and religion & popular culture. In her spare time, she blogs about coffee, television, and religious studies at leahpayne.blogspot.com

1) Gender issue within Pentecostalism are usually relegated to sub-specialties once the "real" history of great men is played out, like an addendum to the real story, how do you think your book and your future work challenges that paradigm?

That’s a great question! I think some of this relegation happens because scholars of Pentecostalism do not think gender theory has potential to give insight to the movement in ways that are just as powerful as the “great men” approach. Hopefully, with time and more gender-conscious scholarship, students of Pentecostalism will see that investigating gender construction shows us a lot about how and why the movement changed over time. Also, as I wrote Gender and Pentecostal Revivalism, I found that questions about gender led me to other helpful questions. If the creation of womanliness and manliness shaped the movement, how about sexuality, race, ethnicity, class, etc.? I hope that my book demonstrates that applying gender theory to the history of Pentecostalism shows us aspects of the movement that intellectual histories of “great men” might otherwise miss.

2) I have found some pretty striking similarities between Pentecostal pioneers like Maria Atkinson, Sister Aimee, and Kathryn Kuhlman to name a few. They all had problems with their marriages, and yet they were venerated as saintly women by their followers, what do you make of this gendered conception of marriage and divorce.


True! Some prominent female Pentecostal pioneers were divorced. One reason for this was that early Pentecostals (and North American Protestants in general) thought of the categories of “wife” and “minister” as discrete. Thus, women often felt that they had to choose between fulfilling their role as a woman in marriage and fulfilling the (presumably male) role as a minister in the pulpit. Many biographies of divorced Pentecostal women include a story of calling, resistance to that calling based on gender concerns, and then an eventual acceptance of the call. Divorce (if mentioned at all) was usually a little-discussed side effect of choosing the call of God. Woodworth-Etter and McPherson are two examples, but many (including Kuhlman, Paula White, Juanita Bynum, etc.) have followed suit.

We can draw several conclusions from this (e.g. it is difficult for powerful women also to enjoy stable marriages, celebrity revivalism often leads to sex scandals, etc.), but what I find most interesting is that the women were able to continue their ministries. This is a key question in Gender and Pentecostal Revivalism: how, in a movement that emerged from the American holiness tradition (and in a gender-anxious era), did certain women manage to maintain authority as ministers, even as one of the most powerful public signs of their womanliness disintegrated? The fact that Pentecostal revivalists managed to both condemn divorce and leave room for divorced women and men to minister shows us that the movement is incredibly adaptable. It also shows us that the ability to do revivalism well trumps just about anything – even divorce!

3.) Academia in confessional schools poses its challenges, but the more I am in academia, the more I think it's really about people in power protecting their vested interests, and wrapping it in different kinds of urgency. The urgency to protect certain views about faith, to protect certain political positions, to protect corporate relationships with universities. What have you found most affirming/difficult about working in a confessional school?

I am only one year into my position, but I can say that it is certainly an adventure teaching at a confessional school! One thing that is always surprising is how much variety (confessional, political, personal, etc.) there is to be found in confessional schools. You can’t assume that you know what a faculty member, administrator, student, etc. thinks about faith or politics. Another thing that I’ve found fascinating is how confessional commitments influence the inner workings of an institution. My university is of the Friends persuasion, and that shapes how the university is governed, its values, decision-making, etc. That’s a big change from my historically-Methodist-currently-unaffiliated alma mater!

I do think it is different now as opposed to 20 or 30 years ago. As a kid, I remember hearing pastors repeat the old joke that theological education killed a person’s faith: “they should call it ‘cemetery,’ not ‘seminary!’” A lot of that has changed. There are some circles in which I experience a good amount of suspicion and questions about why I went to Vanderbilt, why as a woman I would want to do what I do, etc., but for the most part, I’ve been heartily encouraged and affirmed. I’ve also found that there are many younger Pentecostal women as well as some truly courageous senior scholars who are doing good work. And, I think should mention that I’ve had my fair share of well-meaning academicians ask why a Pentecostal would want to be a scholar since Pentecostals are anti-intellectual tongues-speakers. So, there are old stereotypes being deconstructed on both sides! At their best, Pentecostals are recognizing that they have something to contribute to as well as many things to learn from the academic study of religion. I am happy to be doing what I am doing now!

5) Finally, I can't let you go without asking your opinion and getting some background from you on our mutual X-Files obsessions. I remember watching one of the first episodes in Chicago as I was nervously waiting to present at my first AAR meeting in 1994.It was the one with alien spore that was taking over the Arctic science station---I was hooked!!! What hooked you? What is your favorite episode? And what can the show runners do in the 6-episode re-boot that will keep the magic going?

This is my favorite question!!! As you know, I am a huge fan of X-Files. There is so much to love about the show, but since our topic today is gender studies, I enjoy the dynamics between Scully and Mulder. The idea that the woman is the cool-headed skeptic and the man is the hotheaded true believer is a lot of fun. Most of my favorite episodes are from the first two seasons. “Eve,” an episode about eugenics experiments gone awry is super creepy! Also, “Gender Bender,” about a religious commune with gender bending inhabitants combines many of my favorite topics: religion, gender, and science fiction. What’s not to love?

Thanks for the great questions Arlene!