Struggle for the Soul of the Postwar South: A Conversation with Elizabeth and Ken Fones-Wolf

I recently had the opportunity to catch up with Elizabeth and Ken Fones-Wolf regarding their forthcoming book, Struggle for the Soul of the Postwar South: White Evangelical Protestants and Operation Dixie.  It is currently available for pre-order and will be shipping by April, just in time for summer reading lists! 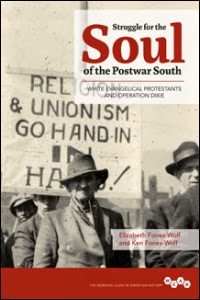 HC: Both of you have written extensively on the intersection of religion and labor in American history.  To what extent does this latest book build upon and/or depart from your earlier work?

E&KF-W: First, Heath, thanks for the opportunity to chat about our work; we are excited to join a conversation with such a strong and varied crop of people who are exploring issues of faith and class.  We have been interested in how religious beliefs have impacted the choices of both employers and workers for most of our careers, although we have worked on other topics as well.  The current project is probably a bit closer to Liz's work (Selling Free Enterprise) than Ken's (Trade Union Gospel), but it also grows out of Ken's experiences in labor education in West Virginia.  Shortly after joining the Labor Studies faculty at WVU, he taught classes in Ravenswood, WV, following the settlement of a bitter 20-month lockout that forced United Steelworkers Local 5668 to absorb the replacement workers into the union.  He was struck by the importance of religion to workers on both sides of the struggle.

For a long time, there was surprisingly little in the scholarly literature on labor and religion that tried to understand precisely what working people believed and how those beliefs shaped their decisions.  This is in stark contrast to the amount of literature existing on the intersection of Christianity and race, particularly in the Civil Rights Movement.  On class issues, there were studies of influential ministers, employers, and labor organizations that explored the uses of religious rhetoric, but few that tried to examine how popular religiosity linked to the actions that workers took when employers tried to exploit their power at the workplace or when union organizers came to town.  We were as guilty of that as any in our earlier writings, something we have tried to do differently this time.  But earlier, only a few historians, such as Wayne Flynt and Jama Lazerow, were notable exceptions to the prevailing pattern.  Of course, that is no longer quite the case.  A new generation of historians is dealing with religion and class in nuanced and sophisticated ways.  Of special importance to us were Jarod Roll, Richard Callahan, Matt Pehl, and Alison Greene, but the list is quite long.  The book that you are editing with Chris Cantwell and Janine Giordano represents an important effort to capture some of the best of this new work and make it central to the narrative of class relations.  That would have been impossible when we did our earlier work a quarter-century ago.

[The conversation continues just below the fold]

HC: What is this new book's main argument?

E&KF-W: When we decided to write a book together, we looked for a major campaign that offered no simple recipe for understanding the mix of sacred and materialistic perspectives.  In the case of Operation Dixie, it seemed to us that most historians tried to fit religion into a deceptively uncomplicated formula -- southern evangelical Protestantism pushed the white working class in only one direction, a direction that resulted in the CIO's failure and the eventual rise of the New Right.  As much as we appreciate the excellent books by Darren Dochuk, Bethany Moreton, and the new one by Matt Sutton, they focus on the voices of religious leaders taking that path; they pay far less attention to the followers.  How did they interpret the apocalyptic ideas and anti-statism of the premillenialist firebrands?  Who did these ministers influence?

We argue that there was no inevitability about evangelicalism's impact on working-class actions.  The Depression emboldened a range of popular theologies for responding to issues of social and economic justice.  Many devoutly evangelical working people, to say nothing of ministers, appreciated the positive state action of the Roosevelt Administration on worker-oriented issues.  But southern evangelicalism was not static.  World War II and the social and economic upheaval of a decade of depression and horrific war caused a shifting of the ground under white southern Protestantism.  When the CIO sent organizers to the South after the war to weave together the threads of prophetic working-class activism for progressive change, they found that religiously-inspired workers were less optimistic that an active state and national institutions could solve the problems of the world.  Instead, they feared what Communism, modernism, racial disruption, and government mandates might mean for new jobs, community harmony, and personal salvation.  These were concerns that employers exploited more successfully than unions.  In hindsight, it seems easy to label the sacred beliefs of working people as conservative and fatalistic, but listening to them talk about their faith-based values suggests far more nuance, a complexity that even the most empathetic individuals in the CIO did not try to comprehend.  As a result, Operation Dixie offered a union-building model that did not fit with the sacred world views of southern workers.

HC: What, in your experience, are the greatest challenges and opportunities entailed in co-writing?

E&KF-W: For us, the greatest challenge of this coauthored project was trying to coordinate our collaboration around demanding schedules.  Liz became department chair shortly after we began in earnest to work on this project.  As anyone who has been chair in the current climate knows, the demands are growing exponentially.  Ken serves as the editor of West Virginia History: A Journal of Regional Studies and his teaching responsibilities have pulled him away from his primary scholarly interests.  Thus, while we made excellent progress on research, our schedules did not permit the sort of extended time in conversation about approach and interpretation that would have enabled us to finish this project on our original timeline.  It also made it more complicated to apply for funding for one of us to complement our sabbaticals, which unfortunately did not align.  We were lucky that the American Council of Learned Societies did not balk at one of us applying for their generous fellowship to work on a coauthored book.

The opportunities (reviewers may have the last word on benefits of our collaboration), we feel, were both personal and intellectual.  Being able to take research trips with one's spouse makes the process of gathering material far less lonely and far more efficient.  Furthermore, having a collaborator nearby almost all the time means not boring other friends (or even total strangers) with your revelations.  Most importantly, however, we benefited from the ability to challenge each other when one of us felt like he or she had the answer.  We work quite differently, and we each have different inclinations to be bold or cautious when interpreting evidence, so it seems like we achieved a balance that individual scholars can only get by dragooning someone who is not invested in the project to spend a good deal of time reading your drafts.  We, of course, did a good deal of that as well (we hope that all are acknowledged adequately in our preface) but we were perhaps a little less needy than we otherwise would have been.

HC: It may be too soon, but any idea what you might want to write about next?

E&KF-W: We have a number of tangential article-length pieces that we still want to do, particularly one on J. Harold Smith, the evangelical radio minister who hated the Federal Communications Commission and the Federal Council of Churches probably even more than he hated unions.  The two FCCs were in cahoots in trying to get him off the air in the 1940s, but the FCC records at the National Archives have two huge boxes of letters from listeners in Knoxville, Tennessee, area who wrote to the FCC on his behalf.  Liz also has been gathering material for a long time on a World War II officer who collaborated with his Japanese captors and was the subject of a contentious secret court-martial trial after the war.  Ken has an idea for looking at four or five not generally known ministers throughout the South whose career included support for both the labor movement and the Civil Rights Movement in the first two decades after the war.

One of the things that we were not able to get enough of in our new book involves how black churches and black Christian working people viewed Operation Dixie and the postwar labor movement.  It is fascinating that despite sharing a great deal in theology, black and white working-class churches played very different roles in the drive for unionization.  We have a number of ideas about some of the questions we might explore here, so we might not be leaving the postwar South any time soon.

rjc said…
Thanks of this, Heath! Some astute observations about the historiography of everyday working people here. Really looking forward to reading the book!
February 18, 2015 at 8:27 AM

Luke Harlow said…
This book looks fantastic. Thanks, Heath. And looking forward to it, Elizabeth and Ken!
February 19, 2015 at 8:30 PM