Child of the Jesus People: A Personal History of the Movement and Reflections on "God’s Forever Family”

I can still smell the popcorn popping in the old carnival machine. I can remember the endless pots of coffee brewed into the evening to keep the audience caffeinated and upbeat. I can hear the warm tones of the guitars strumming a Larry Norman tune from the stage and the murmur of good friends and family as they discussed their weeks and their plans and their faith. Christian Brothers SKYLIGHT was a fellowship, a coffeehouse, a venue, and a ministry—and it was one of many that defined the Jesus People movement of the late 1960s and 1970s.

Reading Larry Eskridge’s impressive history of the Jesus People (God’s Forever Family: The Jesus People Movement in America) is like reading a religious biography of my family in Gadsden, Alabama. Eskridge presents an intricate account of how this California-based movement that became known as the “Jesus People”—believers who adopted the dress, musical stylings, and overall vibe of the counterculture and redirected it towards evangelical/Pentecostal designs.

Like many of the coffeehouses described in God’s Forever Family, the Gadsden group started as an informal meeting of young people who sought a way to outreach to their peers in a way that seemed more meaningful than the stuffy, traditional denominational churches in town. Started by a teenager named Emory Boggs (who happened to be engaged to my aunt Irene) in 1975, Free Relationship Everlasting Enduring (FREE House) began meeting in the back of a doctor’s office but as it grew it moved into a permanent home in a downtown storefront. My parents and my mother’s brothers and sisters served as founding members of the incorporated organization and renamed themselves Christian Brothers SKYLIGHT.

Transforming their new space, they set up a stage (with the only door to the bathroom on it, making pee breaks awkward), bought some café tables and chairs, and invited the community to come eat sandwiches, drink coffee, and 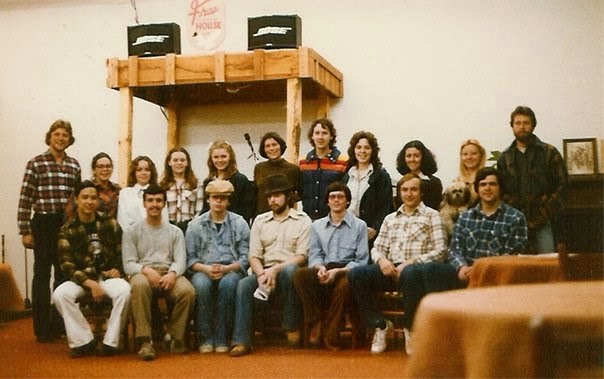 listen to folk and rock music that glorified God. Regular visiting artists included Nori and Barbie Kelley and Mychael John Thomas (nee Michael Jackson). In 1976, Christian Brothers organized the “No Jive Jesus is Alive!” Festival at Nocalloola Falls and brought in other Jesus People groups and musicians like Pslam and the Waddels as well as the Christian Brothers Band. Members of the band included my folks (Don and Jennie), aunt (Irene), and uncle (Brook). In 1977 they redubbed the event the Falls Festival and more and more bands and Jesus People flooded the park each year until the last festival was held in 1980.

One of the groups that participated in the Jesus People festivals was the Twelve Tribes. Founded by Gene Spriggs in Chattanooga (an hour or so north of Gadsden) the Twelve Tribes established communes across the United States and opened restaurants like the Yellow Deli to fund their ministry. Members would work in the deli as part of their commitment to the communal spirit of the group. Unlike Christian Brothers, Twelve Tribes drew negative attention from groups like “The Parents’ Committee to Free Our Children from the Children of God,” who believed it was just as dangerous as David Berg’s famous communal society. Accusations of child abuse and child labor brought negative press to the Twelve Tribes in several states. My uncle Dan (who married into the 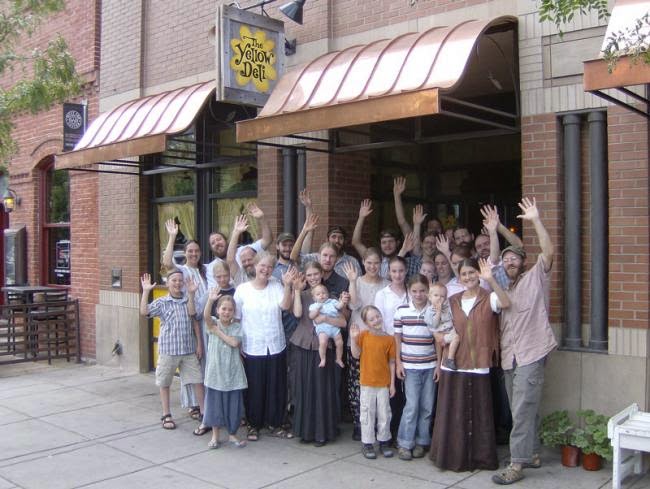 family after this experience) and several other young folks from the community joined the group after meeting them at Falls Festival and moved in to one of their communes and my parents visited one briefly as part of a research project. Dan made his way back home and into the Christian Brothers fold, but his experience (like many other youths at the time) with the Jesus People was varied and reflected the many biblical interpretations and social dynamics present in the diverse, nondenominational movement. Eskridge talks about the tensions inherent in the movement as some groups rejected the more fundamentalist teachings of others or the more radical practices (like Children of God’s “flirty fishing,” for instance).

Eskridge also describes the strong connections between Jesus People groups and local Baptist and Methodist Churches (and some contentions that arose over the Jesus People’s countercultural vibe and rejection of traditional hymns). My family’s church maintained a closeness with the local Central United Methodist Church and my parents served as youth pastors there for a brief time. There were times when Christian Brothers musicians played for traditional churches and congregants left in the middle of their sets in protest. But, in all, the relationship to the local congregation remained firm and served both institutions well as it provided some additional structure and teachings for Christian Brothers and drew in additional members to the Methodist congregation.

Although many of the Jesus People fellowships and coffeehouses in Eskridge’s study disband in the mid-1970s, Christian Brothers lasted until 1998. For financial reasons, the coffeehouse finally closed its doors but soon reemerged (with many of the same members) as a Vineyard Fellowship. As 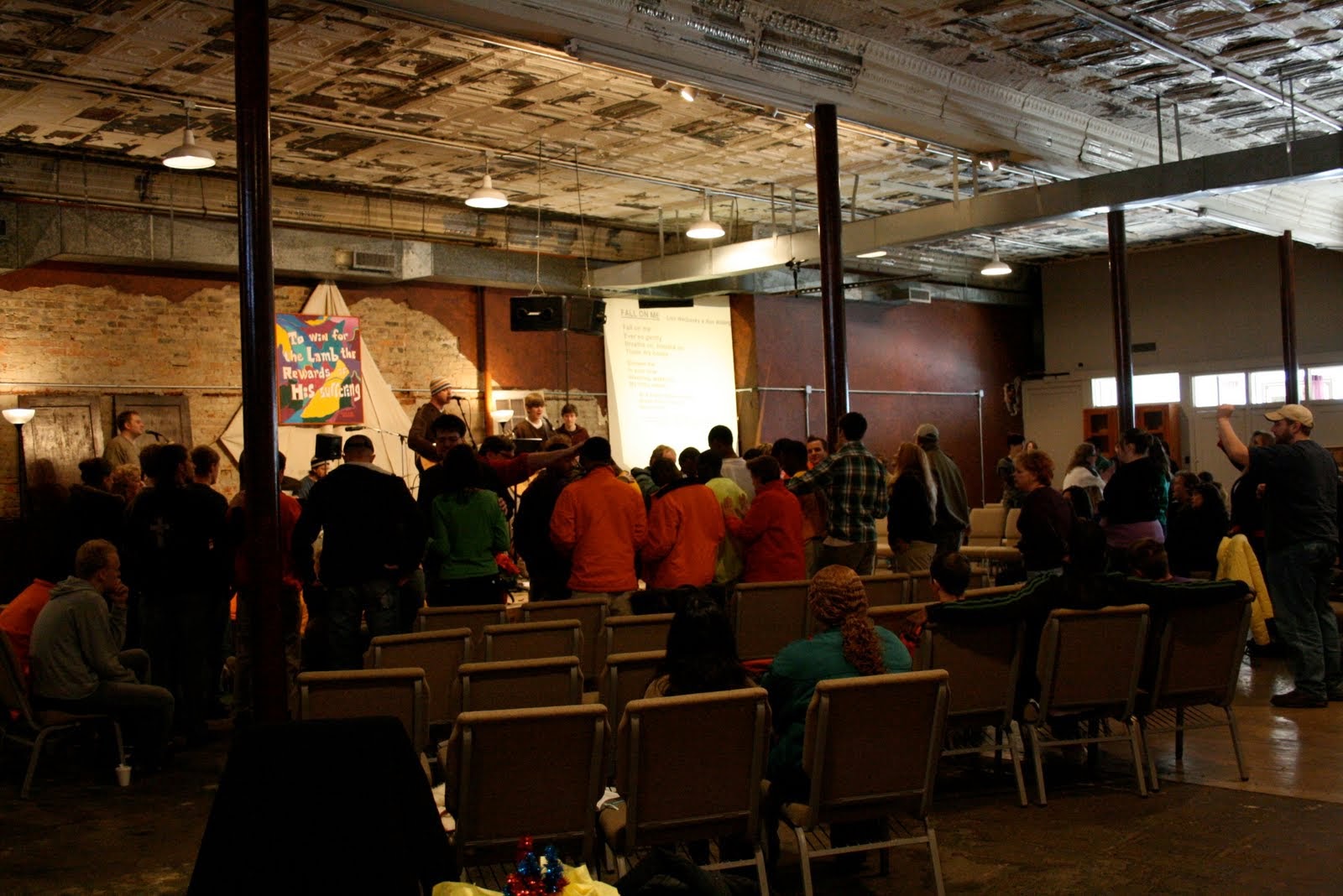 Eskridge points out, Vineyard has been deemed part of a “New Paradigm” in American religious history because they incorporated successful business elements, contemporary music, charismatic teachings, and a casual atmosphere. But the Jesus People did all of this first and established a framework for Vineyard’s success. My family’s church represents a direct correlation between the Jesus People coffeehouses and the Vineyard phenomenon and several of my aunts, uncles, and cousins lead the praise team at the Vineyard, carrying on the tradition of the Jesus People music in their worship.

This post was largely inspired by a panel discussion at the American Historical Association’s CHS panel on Kate Bowler’s book, Blessed. A topic that dominated much of the conversation involved how a Christian’s faith impacts their work. KellyBaker’s reflections on returning to church also encouraged me to consider how my religious past impacts my historical writing. While I do not subscribe to the beliefs of my family, I acknowledge that spending my early years at Christian Brothers had a significant impact on how I view the connections between various religious movements. In my current research on southern megachurches (due to be published with LSU in 2016), I can clearly see what Eskridge mentions in his study: “The rise of these new styles of evangelical music, easily accessible to anyone familiar with the larger popular culture, bespeaks another way in which the Jesus People movement has impacted American evangelicalism: the rise of the seeker-sensitive megachurch.” (8) My early exposure to music from Love Song, Larry Norman, and Phil Keaggy tuned my ear to the evolution of praise music and then the musical productions put on in seeker-sensitive megachurches. The Pentecostal leanings of the Jesus People movement also helps us see the powerful way that neo-Pentecostalism has shaped megachurch teachings and how seeker-sensitive strategies developed in these congregations. The emphasis on hip youth groups in these large churches smacks of the Jesus People emphasis on reaching young folks through familiar mediums and fun times. I’m excited to continue exploring the relationship between Jesus People and megas—and to find out a little bit more about the place of this child of Jesus People within that larger history.

Unknown said…
Christian Brothers had some folks who were Pentecostal, but most of us were United Methodists, Baptists and Presbyterian. The Finlayson kids enjoyed the old hymns, the camp meeting hymns as well as the newly birthed Jesus music. Yes, Christian Brothers was part of the Jesus Movement, but I'd like to interject that an old holiness camp meeting lit that initial fire for our family. Our little southern awakening had some serious brush arbor roots. The fire from camp meeting came home with the youth, started with a prayer meeting and went from there. Our fire was lit by the Holy Spirit via Behtlehem Camp Meeting in Bonifay, FL.

The Yellow Deli was a weird moment in time. It was hard enough having churches in the area thinking we were a cult, without a real cult coming along and luring some of our friends away. Often churches thought we were trying to lure their young away. There were a good many rumors about Christian Brothers going around at the time. I never considered us non-denominational, but interdenominational. We did not pull people away from their churches, we were the young Christians who fellowshipped with each other across denominational lines. Those lines have faded a good bit since those days, maybe we had something to do with that.

rjc said…
Thanks for this. An portent but under acknowledged part of US religious history. I came to know Jesus People folks in the Boston area in the late 1970s in the Episcopal Church! And many of us got to know the Twelve Tribes in the 1980s due to their ubiquitous presence at Grateful Dead shows.

Unknown said…
The Jesus Movement, in the places where I experienced it, called for a radical, life changing relationship with Jesus and that shared experience turned a drugged out and rebelious portion of the hippie culture into on fire Christians with a burden for their unsaved friends. I pray that rock concert, multimedia oriented, seeker friendly mega churches will be able to say the same. Jesus calls us to be disciples, not pew fillers.
February 16, 2015 at 9:50 PM

Obadiah said…
No mention of Shiloh Youth Revivals. It was based in Eugene Oregon and spread nationwide. Shiloh was very big at one time having more than 100 houses. I was part of Shiloh in the 70s.
February 17, 2015 at 3:30 AM

David Stowe said…
Informative piece, Charity. You might be interested in some of my fundings on the movement in No Sympathy for the Devil: Christian Pop and the Transformation of Evangelicalism (UNC 2011). Also some blog pieces I wrote on the Jesus Movement: http://uncpressblog.com/tag/no-sympathy-for-the-devil/
All the best,
David
February 20, 2015 at 8:22 AM