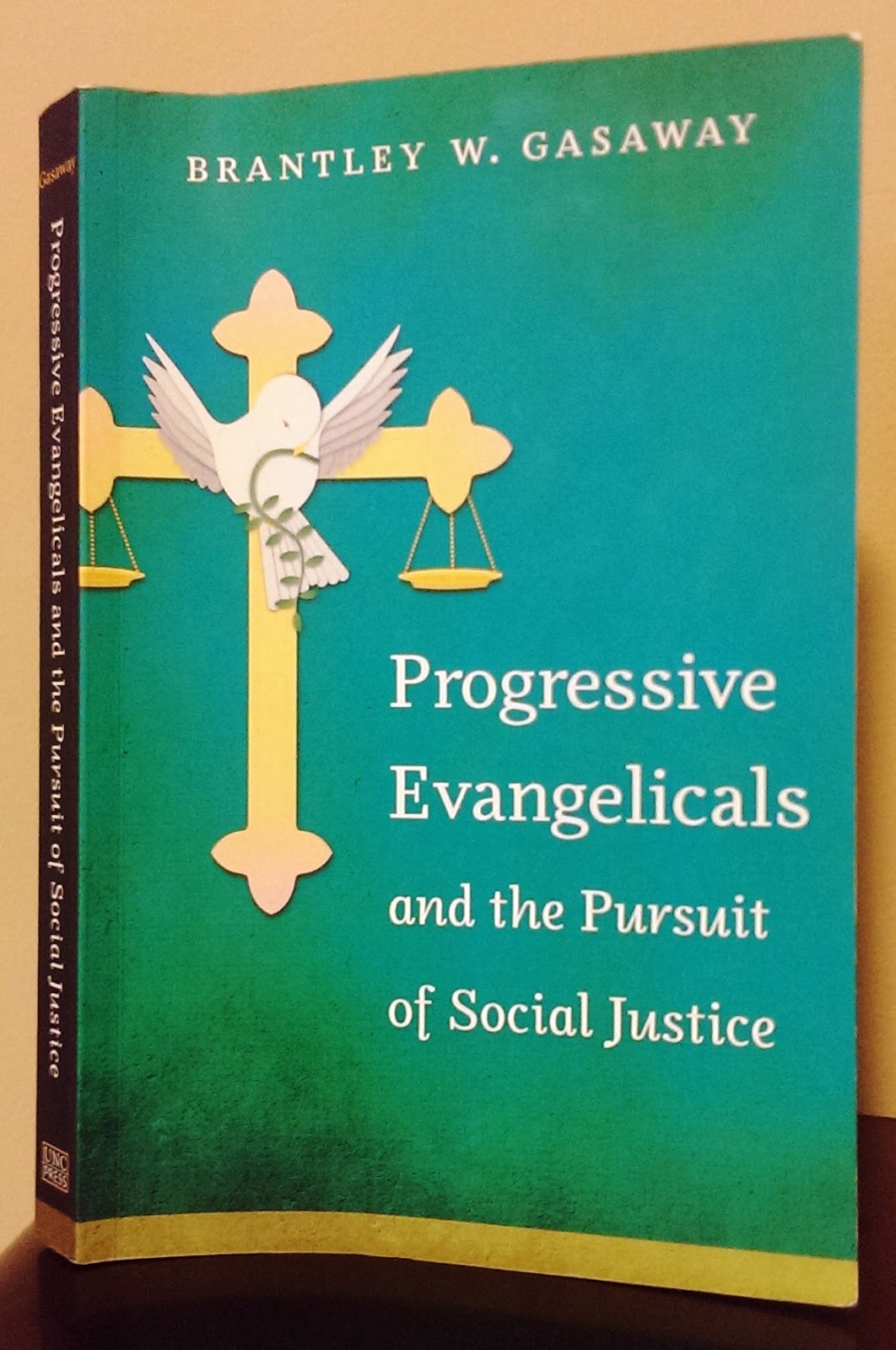 Today I have the great pleasure of reviewing Brantley W. Gasaway’s recent monograph, Progressive Evangelicals and the Pursuit of Social Justice (University of North Carolina Press, October 2014). In this book, Gasaway traces the contours of the progressive evangelical movement from its emergence in the early 1970s through the present day. He details the pressing social concerns that spurred leaders such as Jim Wallis and Ron Sider to call like-minded evangelicals to greater political involvement, explains how these leaders’ views on hot button issues such as gay marriage and the war on poverty evolved over time, and explores how the movement endured despite tensions with the religious right as well as the secular left.

Gasaway locates the roots of the progressive evangelical movement in two journals, The Other Side (which was founded in 1965 as Freedom Now) and the Post-American (which was founded in 1971 and became Sojourners in 1975), both of which championed progressive political causes such as civil rights and economic justice. He argues that these journals provided a testing ground for leaders to develop their ideas as well as an intellectual community where individual Christians could come together to form a nascent progressive evangelical network. As he notes, “in the pages of these pioneering magazines, leaders presented theological and pragmatic arguments to persuade evangelicals that progressive social action represented a duty rather than a diversion. Their development of an evangelical theology for public engagement represented an important step, for contributors to these journals constructed a middle ground between what they deemed two unacceptable alternatives: most evangelicals’ preoccupation with individual religious conversions and apolitical separatism, and the Social Gospel emphasis on societal transformation and justice that continued as a force within liberal Protestantism.” (40).

In his second chapter, Gasaway suggests that the leaders of this new movement—particularly Jim Wallis, founder of The Post-American/Sojourners, and Ron Sider, founder of Evangelicals for Social Action—developed a “public theology of community” through their writing and public statements that guided progressive evangelicals in their political engagement and advocacy campaigns during the 1970s and beyond. At the heart of this “public theology of community” lay the belief that God created all humans in his image, endowing them with dignity and sacred value, as well as the belief that God intended humans to live communally and care for one another. As such, Gasaway suggests that “the principle of humans’ inherent interdependence,” coupled with belief in universal human dignity, led progressive evangelicals to promote political policies that they deemed would advance the common good. (59).

Having teased out this core theological foundation, Gasaway then takes readers through a series of issues: racism, Biblical feminism, abortion, LGBTQ civil rights, poverty, and American militarism. Each of these themes receives its own chapter, and each chapter proceeds chronologically in its exploration of how progressive evangelicals wrestled with, understood, and responded to the challenges these issues posed to American society and, at times, their religious beliefs. Gasaway bases his analyses of these issues on careful readings of articles, editorials, and letters to the editor published in The Other Side, the Post-American, Sojourners, and other periodicals, the public statements of progressive evangelical leaders Wallis, Sider, and Tony Campolo, and the official documents that organizations such as Evangelicals for Social Action produced. This approach illuminates the nuanced and ever-evolving thinking of these leaders, though it tends to produce a top-down (and male-dominated) narrative. Gasaway works to counteract this by including some responses from non-elite members of the movement as well as from women when he addresses issues, such as abortion, that sparked disagreement within the progressive evangelical community.

Rather than discuss each issue that Gasaway covers, I would like to highlight several themes that emerge from these issue-specific chapters. First, some of the chapters reveal fascinating moments when progressive evangelicals struggled to reconcile their impulse to promote social justice with a seemingly incompatible interpretation of the Bible’s teaching on a given issue. While progressive evangelical leaders made impassioned, principled stands opposing racism and supporting feminism from the beginning, Evangelicals for Social Action and the editors of Sojourners and The Other Side found it more challenging to find common ground on abortion and gay marriage. Gasaway notes that “most progressive evangelical leaders displayed unusual timidity and avoided taking a public stance on abortion through the end of the 1970s.” (132). Sojourners, meanwhile, attempted to forge a middle way “in which pro-life and pro-choice advocates would work together to make abortion rare,” a stance which won them little support from either side of the national debate. (141). Likewise, in describing the split within the movement over gay rights, Gasaway describes how Sojourners remained locked in a “prolonged silence” before declaring homosexual acts sinful. Where The Other Side eventually endorsed full acceptance of gays and lesbians during the early 1980s, the editors of Sojourners struggled to reconcile their understanding of Biblical authority on the issue with their belief that the government should not restrict the civil rights of gays and lesbians.

Progressive evangelical efforts to chart a middle way on hot button issues also crop up in chapters that concern a third major theme that suffuses the book: the progressive evangelical emphasis on systemic economic injustice. For example, in their proposals for reducing abortions, the progressive evangelicals that Gasaway profiles called for measures to provide economic support for poor women so that they would choose to have their children rather than terminate their pregnancies. (154). Similarly, Gasaway details a shift in progressive evangelical thought on poverty eradication where progressive evangelical leaders who had supported government-directed redistributive policies to tackle poverty throughout much of the late twentieth century began to promote a middle way between Republican proposals to eliminate such policies and secular liberal proposals to continue them. While not giving up entirely on redistributive policies, progressive evangelical leaders such as Ron Sider came to believe that some welfare programs hurt the poor more than they helped; as such, he and others came to support a blend of aid from charitable organizations and government support. According to Gasaway, while these leaders “moderated their criticism of capitalism, accepted broader interpretations of the causes of poverty, and championed antipoverty partnerships between the government and private organizations and ministries,” they held fast to their belief that “faithful Christians must emulate God’s special concern for the poor; and a just society empowers the poor through redistributive policies that reduce gross inequalities and provide substantively equal economic opportunities.” (222).

Thus, Gasaway illuminates the complexity of progressive evangelicalism (or, at least, the complexity of a select group of its leaders and publications). There are some challenges in determining how or to what extent these progressive evangelicals influenced broader public discourse—studying their writings and public statements alone does not necessarily tell us much about this, and it is hard to draw any definite conclusions about their inclusion in talks at the White House with George W. Bush and Barack Obama on certain issues. The reliance on leaders and publications also presents a challenge in that it is hard to get a sense for what actions grassroots progressive evangelicals actually took on these issues (how were they organizing? If they wrote to their congressional representatives, what concerns did they express? Were they active in the sanctuary movement at all, given their concerns about Reagan’s policies in Central America? Why were they less effective at forging connections with political leaders than the religious right?). These questions aside, this is an important and lively book, one which reminds us that evangelicalism is not and never has been politically monolithic; although many evangelicals claim allegiance to the religious right, Gasaway rightly demonstrates that there was (and is) a vibrant, durable evangelical left.

Lauren Turek said…
Thanks, Mark! It was a great read and, more importantly, pushed me to think more expansively about the diversity of political opinion—and influence—within modern evangelicalism.
January 27, 2015 at 12:52 PM