Earlier this fall I had expressed my hope to host several guests in my "American Religious History" course. I was delighted to set up a visit from Nancy Koester, the author of the recently-published Harriet Beecher Stowe: A Spiritual Life.

Nancy did a fabulous job, and I wanted to make sure she could share some of her insights with the RiAH audience. This interview is the result.

JDH:  For many years, I’ve had on my book-shelf Joan Hedrick’s biography of Harriet Beecher Stowe. What perspective did you seek to add with your biography?

NK: Joan Hedrick’s 1994 Harriet Beecher Stowe: A Life won a Pulitzer Prize.  Her book has been a rich resource for me, but yes, my perspective is different.  I wrote the book as a church historian who has also been a pastor.  And my publisher, Wm. B. Eerdmans Co., wanted a shorter biography of Stowe--it needed to be well researched and substantive, yet inviting to readers who might shy away from a big university press biography.  My book aims for an educated Christian readership and reaches both evangelicals and mainliners.  On the other hand, I was asked to speak to a group called “Dead Feminist’s Society: Salon for Uppity Women,” on Harriet Beecher Stowe and 19th century feminism.

JDH: How would you describe Harriet’s spiritual outlook? What are the major themes in her faith? And, do you think they changed over time? 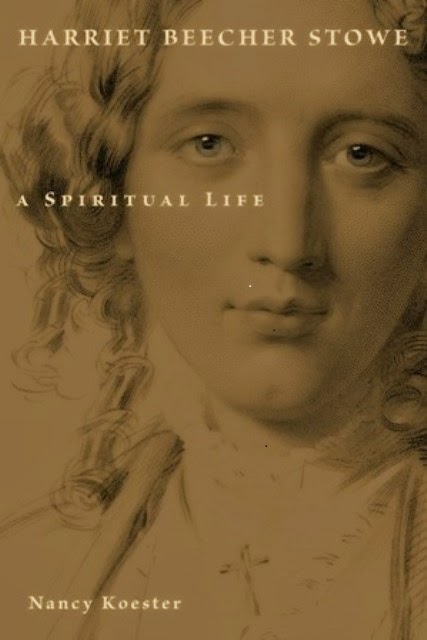 NK: Harriet’s spiritual outlook started with her father, Rev. Lyman Beecher, who spent his lifetime combining revival and reform to aim for a godly society.  When Stowe was in her early forties she burned with righteous indignation against slavery.  Her spiritual outlook can be described as conflict and vindication: conflict with evil (slavery) and the vindication (freedom) that must come.  When the powerful are brought low and the lowly are raised up, God is glorified.  This was her theological world, but it shifted when her son Henry died of accidental drowning in 1857.  As far as anyone knew, Henry died unconverted.   Stowe was taught by her father, that those who die unconverted are lost for all eternity.  And now Harriet suffered a double separation: the living from the dead, and the saved from the unsaved.   From that time forward, she struggled with separation even more than with injustice. She was drawn into spiritualism, because it claimed to bridge the gap between the living and the dead.  But spiritualism left her dissatisfied and questioning the integrity of the mediums who claimed to communicate with the Other World. In Christianity, she found strength to face death, and hope of resurrection.  She embraced the Communion of Saints which unites all Christians across space and time.  And she came to believe that one can become a Christian through baptism, nurture, conversion, or combination.

JDH: I always feel like Calvin Stowe fades into the background when people talk about Harriet. What did you learn about Calvin, and how would you characterize their marriage?

NK: Harriet eclipsed Calvin, that’s true.  Harriet became a world famous author, but Calvin’s influence was in academia.   A biblical scholar, Calvin taught at Bowdoin and Dartmouth colleges, and Lane and Andover Seminaries.  He had a disciplined intellect, but he also had a wild imagination.  As a child, he  thought he saw ghosts and later in life became a devotee of spiritualism.  Calvin could be moody and depressed.  Harriet told him to stop “cultivating indigo” and get some fresh air and exercise.
Their marriage started out in the usual way: Calvin was to be the breadwinner and Harriet the home maker.  But Harriet had always wanted to write.  When Lane Seminary (Calvin’s employer in Cincinnati) fell on hard times and could barely pay his salary, Harriet wrote magazine articles to help pay the bills.  By that time, they had small children.  So  Harriet had to buy time to write, by hiring help. Calvin thought this extravagant, and said Harriet could manage without help… if she could only get herself organized.  To his credit, however, Calvin came to see that Harriet could indeed make money with writing.  More important, she was happier.  Calvin became Harriet’s biggest fan:  “You must be a literary woman,” he urged, telling her to use her own name (not a pseudonym as many women writers did).  In time, Harriet and Calvin developed “a companionate marriage,” nineteenth century parlance for a partnership of equals.   They had would have seven children, six of whom lived to adulthood.
When Calvin retired from teaching, the family relied entirely Harriet’s income from writing.  This freed Calvin to finish his one and only book:  Origin and History of the Books of the New Testament, Both the Canonical and the Apocryphal, Designed to Show What the Bible Is Not, What It Is, and How to Use It.  (1867)  Calvin was such a perfectionist that,  without Harriet to push him, he might never have submitted his work for publication.
Harriet likewise depended on Calvin.  Though she was raised a Beecher and therefore steeped in Bible and theology, Calvin became her resident expert in Bible, theology, politics and ethics.  “My rabbi” was her term of endearment for Calvin, and with his white whiskers and black cap, he looked the part.  Harriet could transform Calvin’s ideas into vivid stories.  Calvin was a theorist, and Harriet a popularizer.  William B. Allen, in Rethinking Uncle Tom: The Political Philosophy of Harriet Beecher Stowe, identifies Calvin’s views at work in Harriet’s anti-slavery writings.  Take, for example, the idea that the system of slavery is inherently evil, so making personal attacks on slaveholders is not helpful.  Or that a true American patriot—and for that matter a true Christian--will not defend slavery, but seek to abolish it because the system of slavery is bad for everyone.

JDH: How was Harriet always Lyman Beecher’s daughter? What do you think she carried forward from her father’s Congregational outlook?

NK: Harriet always loved and respected her father.  By middle age, however, she was pulling away from some of Lyman Beecher’s views (like eternal punishment for the unsaved, or conversion as necessary for salvation).  When Lyman Beecher died in 1863, Harriet was free to join the Episcopal Church.  Her new spiritual home emphasized liturgy rather than doctrine, and the broad Communion of Saints rather than individual conversion.
Lyman Beecher saw conversion as necessary for salvation, and conversion was a very particular set of experiences that followed a revival template.   Harriet broadened her views of how people become Christians, yet she never rejected conversion and revivals.  As an old woman writing to her son Charles (a Congregational minister) she made favorable mention of Moody’s revivals, and seemed especially pleased that Moody drew people together across denominational lines.  In her last New England novel (Poganuc People, 1878) Stowe paid loving tribute to her father and the New England of her youth.  And when in old age an enfeebled Harriet could write only a few words, she would copy over and over her father’s motto:  “Trust in the Lord and Do Good.”

NK: Catharine Beecher was about ten years older than Harriet.  Their mother, Roxana Beecher died in 1816 and Catharine helped to raise her younger siblings.  She took charge of Harriet’s education and made her a teacher at the Hartford Female Seminary, the first of several schools Catharine founded.  When Catharine suffered a health crisis, Harriet ran the school. And when their father moved to Cincinnati, Harriet and Catharine went with him and opened the Western Female Institute.
Catharine saw women as intellectually equal to men, but she believed that women belonged in the home, and should use moral influence on their families rather than making direct attempts to reform society through voting, holding office or publicly expressing their views on issues like slavery.  Harriet moved beyond Catharine’s boundaries in writing Uncle Tom’s Cabin, a very public protest against slavery.  And Catharine, to her credit, helped Harriet find time to work, by schooling Harriet’s children during the writing of Uncle Tom’s Cabin.
When it came to “the woman question” Catharine was a conservative reformer and  Harriet was a moderate progressive. (Harriet believed women should vote and have a wider range of professions open to them).  Their young half-sister Isabella was more radical.  She worked alongside Susan B. Anthony and Elizabeth Cady Stanton for the woman’s vote.  There were tensions between the sisters, but they never forgot they were daughters of Lyman Beecher.

JDH: In a well-known article , James Bratt* suggested that Harriet’s turn to Episcopalianism was a possible response as the 2nd Great Awakening wound down. What do you make of this claim? Do you think Harriet was part of a larger movement among evangelicals?

NK: Yes!  Not only was she part of it, her writings helped advance it.  By “it” I mean a movement toward more churchly traditions. James Bratt says that by the mid 19th century, revival tides were ebbing and American evangelicals were seeking alternatives.  The alternative that drew Harriet was the High Church tradition, where, as Bratt puts it, “sheer depths of beauty could assuage the sharpest doubt or pain.”  He calls Harriet the “poster child” of the “High Church appeal in the evangelical center.”   Faced with her own personal losses and the horrors of war, she found comfort in the Book of Common Prayer.  In contrast to her father’s New England, where sacred time was measured in seasons of repentance and revival, Harriet cultivated a new (to her) devotional practice by following the seasons of the Church Year.
After the War the Stowes bought property in Florida and wintered there for up to six months a year.  They started an Episcopal congregation in Mandarin (now part of greater Jacksonville).  Calvin, though a Presbyterian, was the volunteer pastor until the church could afford to call and pay an Episcopal priest.  Stowe loved and collected paintings (or reproductions) of the Virgin Mary, another departure from the piety of her childhood.
Thus Harriet moved toward a form of Christianity Bratt describes as “Christological, ecclesiological, and sacramental.”  He also notes the “fascination with the medieval among the American literati of the time.”  That fits Harriet.  In Europe she saw cathedrals and cloisters, art museums and abbeys.  Her travel memoir, Sunny Memories of Foreign Lands, explores the need for art and beauty—as well as revivals and reform--in the Christian faith.
Perhaps Stowe saw herself as part of a larger movement of evangelicals toward higher church traditions.  Or perhaps it seemed like a personal quest, which she felt moved to share with her readers.   Either way, her influence on American Protestantism rivaled that of her father.