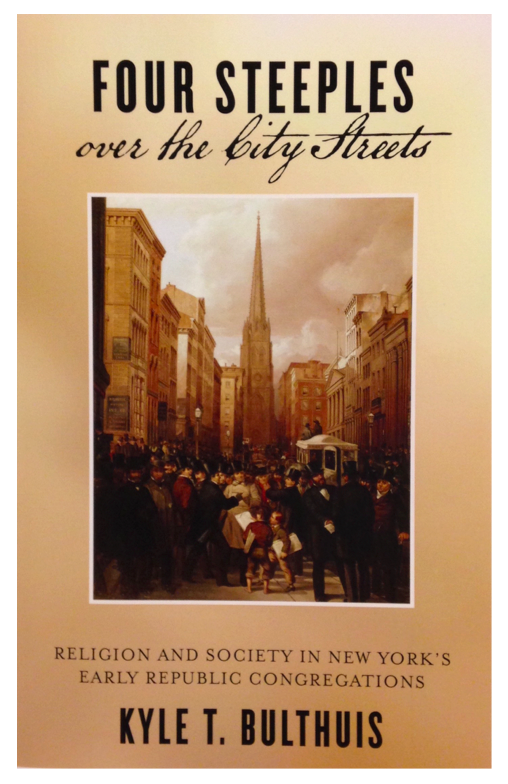 In her 2013 presidential address to the American Society of Church History, Laurie Maffly-Kipp urged society members to consider anew the organization's roots in church history. The historiographical trend to look beyond churches in our search of religion in the near and distant past, she cautioned, ran the risk of obscuring the historical reality of those we study. Far from a desire to return to the predominantly Protestant providentialist narratives of yesteryear, Maffly-Kipp's was a call instead to explore how and why churches mattered, and what role they played in the lives of their adherents. Among other things, she warned, "a failure to acknowledge the power of religious institutions may lead to incomplete historical understandings of the behavior of others, past and present, for whom religious agency was, or is, more integrally tied to the life of organized churches."[1]

I was reminded of Maffly-Kipp's address as I recently read Kyle Bulthuis's Four Steeples over the City Streets: Religion and Society in New York's Early Republic Congregations (New York University Press, 2014). Bulthuis's book, though not written in response to Maffly-Kipp's 2013 address, nevertheless speaks to many of the points she made.[2] Four Steeples is, quite self-consciously, a church history (or church histories), taking as its subject four Protestant congregations—Trinity Episcopal, John Street Methodist, St. Philip's (Black) Episcopal, and Mother Zion (African) Methodist—located just blocks apart in the heart of lower Manhattan, tracing their histories from the late eighteenth century through the first half of the nineteenth. As the author explains in the introduction, "this study draws together several genres of historical inquiry," including social history, religious history, and lived religion. "Church history," he continues, "provides a base and a foil for the work" (5). Four Steeples follows the model of traditional church histories by closely tracing their stories over a period of time; it departs from them in challenging their assumptions and complementing their focus on clergy and theology by granting equal attention to the laity and considering race, class, and gender as lens through which to understand congregational life and the relationship between the churches and the society in which they developed. In doing so, Bulthuis provides one model of what Maffly-Kipp called for when she argued that "religious institutions ... provide a critical vantage on other sorts of loyalties and affiliations, as well as offering pleasures of their own."[3] "Congregants," explains Bulthuis, "paired their religious lives with identities borne of their living and working spaces." And even as those religious identities impacted the way they related to various other aspects of society, they gradually took a backseat to racial and economic concern. As a result, "the churches grew less relevant to the community as a whole" (12).

Each of the four congregations under analysis shared a common heritage in New York City's colonial Anglican past, and each congregation's subsequent history includes multiple instances of intersections between the four, even as each forged and followed a unique path in navigating the social, political, and economic disruptions that marked the city's early national years, and it grew to become the largest urban area in North America and the financial capital of the United States. The first two chapters cover well-worn ground, providing short, readable overviews of New York City's colonial-era religious history and the challenges to it presented by the outbreak of revolution, and serve a prelude to the more substantive and original contributions made by Bulthuis: the deeply-researched and fine-tuned analyses of the intersections of institutional religion with a number of social, economic, and cultural precedents, events, and changes. Subsequent chapters proceed chronologically, but each tackles a general thematic category: the socioeconomic composition of each congregation in its early years; the place of women and their role in shaping the trajectory of church life; the intersections of gender and race, particularly in the black congregations; the dynamics of dissent, schism, and ecclesiastical separation; the impact of city growth on each congregation's development; and the domestication of church life in the face of abolition, immigration, and nativist politics. A conclusion takes the narrative through the revivals of the 1850s and reflects on the importance of place, space, and mobility for churches in an urban setting.

Bulthuis is a dogged researcher, and his books rests on close readings of the extensive archival collections of early Episcopal and Methodist church records, cross-referenced with city directories, real estate records, and membership lists of various political and reform-minded movements, to tease out the socio-economic statistical data and compositionof each congregation. He intersperses such scrutiny with short vignettes and biographies of various Episcopal and Methodist men and women who exemplify the patterns his statistical analysis suggests. The lives of Elizabeth Ann Seton and Catherine Livingston Garrettson, for example, are compared and contrasted to highlight the "social and gendered dynamics" of "theological conflicts" in their respective denominations; those of Peter Williams, Sr., a former slave and early leader of the Mother Zion (African) Methodist congregation, and his son and namesake, Peter Williams, Jr., an Episcopal minister of St. Philip's African Episcopal Church, point to different strains of the middle-class aspirations of black religious leaders in each denomination and the resulting internal tensions they caused. Both father and son saw in the ministry an opportunity assert their masculinity and to challenge the racial and gendered dynamics of church life, in which free black men were grouped together in church life (and church records) with not only enslaved black men, but the enslaved black women who dominated the ranks of the black classes and congregations in New York City. But each took a different path; the elder Williams a devout Methodist who favored biracial worship, ran up against the opposition of other black Methodist ministers, who increasingly favored not only separate worship spaces but separate institutional identities from their white coreligionists. His son, by contrast, left the Methodist fold and joined the Episcopal Church, seeing in it a better opportunity to promote "moral improvement for blacks" and "to support immediate abolition" for slaves (141-42). Where contemporary church records are scarce—as they so often are in documenting the religious lives of early black church leaders and laity—Bulthuis reads later reminiscences and oral traditions of denominational beginnings against his careful examination of surviving church and city records and the social and economic contexts in which they occurred.

In doing do, he occasionally challenges accepted interpretations of African American church history, suggesting, for instance, that the growth of the African Methodist Episcopal Zion Church in New York City during the 1830s and 1840s was marked as much by "division as [by] unity," and that the church retreated from the public stage, in contrast to both their AME counterparts in Philadelphia and their Episcopal and Presbyterian brethren in New York (180, 239, n23). More broadly, Four Steeples challenges traditional narratives of religious growth and declension in the early Republic. In doing so, Bulthuis is, of course, not alone. But when he argues that that "early Methodism was close-knit, but aristocratic as much as democratic," his argument rests not on assertions of the authority invested in and wielded by MEC Bishop Francis Asbury and his hierarchy of presiding elders and preachers, but rather on analysis of the local dynamics of congregation life, in which the sons and daughters of prominent Methodist families married one another, reinforcing the very social distinctions Methodism supposedly set out to demolish (188).

As I worked my way through the book, I occasionally found myself wondering about the larger denominational contexts in which the changing makeup of each congregation occurred, wishing for more explicit nods to larger denominational developments, including debates over slavery, ministerial rights, and lay representation. Upon completing the book, though, I wonder if this was part of a more intentional effort to move beyond narratives that privilege the role of Methodism's itinerant ministers and their mobility or emphasize the transnational context of the Protestant Episcopal Church's beginnings. In reconstructing the religious lives of individuals at a congregational level, then, Bulthuis demonstrates not only the ways that alternate and accompanying identities intersected with religious concerns, but also the extent to which local affairs dominated the experiences of individuals and shaped the institutions to which they belonged.

[2] The book is an revised version of Bulthuis's dissertation ("Four Steeples over the City Streets: Trinity Episcopal, St. Philip's Episcopal, John Street Methodist, and African Methodist Episcopal Zion Churches in New York City, 1760-1840"), completed at the University of California, Davis in 2006, under the tutelage of Alan Taylor.