Review: America's Pastor: Billy Graham and the Shaping of a Nation, by Grant Wacker

America’s Pastor: Billy Graham and the Shaping of a Nation. By Grant Wacker. Cambridge: The Belknap Press of Harvard University Press, 2014. 413pp. cloth. $27.95. 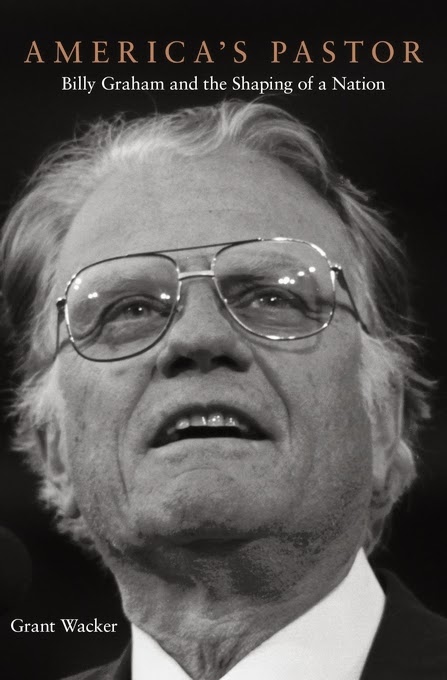 It is not easy to imagine life in post-World War II America without Billy Graham and the evangelical movement. Students of American Christianity can recite the significant turning points in Graham’s public life: Los Angeles in 1949 and “Puff Graham;” New York City in 1957; Truman, Ike, JFK, and LBJ; Nixon, Watergate, and the White House tapes; over 1 million at one Korea Crusade meeting; Johnny Cash and the born again 1970s; the USSR in the 1980s; Central Park; and so on. Crafting a fresh look at Billy Graham is not an easy task, largely due to his high profile public life and the abundance of existing works devoted to telling his story. In America’s Pastor: Billy Graham and the Shaping of a Nation, Grant Wacker provides the new standard for interpreting Billy Graham as well as an essential look at the evangelical movement in the latter twentieth century. Neither an apologist nor an opponent, Wacker’s tenacious pursuit of accuracy is done first for the sake of good history, but also as a service to Graham himself. Getting the story right is a tribute to Graham’s life and work. Wacker examines exhaustive evidence and cites many historians by name to acknowledge their good work on Graham.

Wacker asks three framing questions for interpreting Billy Graham. He wonders how Graham became the “least colorful and most powerful preacher in America.” Further, he asks how Graham brought evangelical ideas into everyday life, and simultaneously shaped American culture while it was also shaping him. Wacker suggests a simple answer for all three inquiries: Graham consistently appropriated cultural trends for evangelistic and reform purposes. In doing so, he always kept a moderated political stance that pleased presidents and powerful leaders around the world. His longevity was a testimony to his restraint on controversial matters, and also his refusal to accept many of the lucrative offers to take on additional roles other than his public ministry. He was above all an evangelist, or “America’s pastor,” as President George H. W. Bush called him. The result of this appropriation of culture was that American evangelicalism pulled away from the fundamentalist movement, then matched and eventually surpassed mainline Protestantism in terms of cultural influence. It requires a deep exploration of Billy Graham’s work to chronicle that development over his 65-year public life. Wacker deconstructs the public image of Graham into eight roles that provide the chapter organization for the book. Within each of these studies, Wacker breaks down various roles into specific categories, boundaries, beliefs, practices, and other details. This precise analysis and organization, along with Wacker’s eloquent voice, make for a compelling read.


Billy Graham’s ventures into politics, centering around the White House, are a major focus of the book. These presidential relationships often required Graham to take a position on controversial matters such as civil rights or the Vietnam War. Political friendships required a moderated stance, and Graham was often eager to please. Over time, political restraint would prove regrettable on some matters of social conscience. Wacker demonstrates that on race issues, Graham was not always clear as to his conviction or how much he should risk in order to pursue advocacy of desegregation. Wacker uses skepticism to dig deeper into archival evidence, eschewing the standard explanations that have become part of the Billy Graham myth. Some of these legends are indeed true, such as Graham’s personal actions to take down the rope of Jim Crow segregation at his Chattanooga stadium crusade in 1953, confirmed by evidence as well as a firsthand conversation with Graham. Where Wacker does not have confirmation for a story, he addresses the lack of evidence to leave the matter up for interpretation. One example is Graham’s recollection, recounted in his memoir Just As I Am, that Martin Luther King admonished him to stay in the stadiums, rather than march in the streets with civil rights protesters. Since Wacker could find no evidence of this communication in the King papers, it is left up to the reader’s discretion. On Vietnam, Wacker examines the various ways that Graham supported his close friend Lyndon Johnson, and later Richard Nixon, while moving slowly away from support for the war by the early 1970s. In this example, Graham acted as a private pastor to support his powerful friends, rather than an activist who used his access to affect social change. Years later, Graham regretted not speaking out against the war, and realized that his close friendship with Nixon clouded his objective judgment. Civil rights and the Vietnam War show that Graham was savvy in keeping his good stead with political leaders, but at a cost of pursuing a more active social agenda.

One of the most rewarding aspects of the book is the unique voice that Wacker brings to his study. His appreciation for American culture, church history and evangelicalism allows him to speak with authority and skepticism when recounting the standard tales of Graham’s forays into politics or cultural matters. Wacker cast some doubt on reports from a 1982 assembly at Evangel College where Graham’s sermon was cut short, followed by a prophetic utterance in tongues, an English language interpretation, and a benediction. Some reports credited Billy Graham with embracing Pentecostal gifts after this service, but Wacker questions whether the story was remembered accurately. Wacker’s chapter on Graham as a Southerner provides a solid interpretive model of the recent New South in its own right. In addition to political matters, Wacker studies correspondence from Graham’s many followers, including children’s prayer requests for such needs as healing for the family dog or fish.

America’s Pastor reaffirms the powerful sway that Graham had in defining the evangelical movement from the late 1940s to the present day. As Wacker points out, young people today may not know Graham or his legacy. Graham’s public life mirrors the eagerness of neo-evangelicals of the 1950s, seeking affirmation and acceptance from political and business leaders. Graham—and evangelicalism—moved into more circles of power during the 1960s, arriving at a position of cultural saturation by the 1970s. By the 1980s, political aspirants needed Graham more than he needed them. But by the start of the new century, Graham—and many fellow evangelicals—reflected on missed opportunities to apply the gospel to the cultural needs of the day. Graham’s discernment in cultural appropriation, which he judged as not always vocal enough, was often imitated poorly. One result was the gospel combined with a commercialized materialism that was devoid of a powerful social ethic. Graham’s ability to exert public influence over seven decades is testimony to his cautious use of culture. Unlike many religious leaders who have built kingdoms around their own colleges, megachurches, or denominations, Billy Graham’s enduring legacy is not measured in institutions that bear his name. Early offers to start Billy Graham University, or pay a lucrative salary for Graham to host a daily talk show were denied. Christianity Today is suggested as a lasting contribution, as the enduring and influential voice for the ever-changing evangelical movement. Wacker looks at another option—the millions of converts and commitments from Billy Graham meetings, as measured by the cards completed at Crusade events and rallies dating back to the late 1930s. This measure would please Graham, and provides an enduring reminder of the role that he chose to play above all other options presented to him during his long public life.

esclark said…
Thanks for this review Michael! Many have been waiting for Wacker's book on Graham for a while and it sounds like it does not disappoint.
November 12, 2014 at 9:33 AM

Michael Hammond said…
I appreciate it, Emily. His analysis is at once methodical and conversational...I really enjoyed it.
November 12, 2014 at 5:37 PM