I wrote this post early, because today I am at Johann Gutenberg University in Mainz, Germany, for a conference on Protestants and the religious press. Logical place for such a conference, don't you think? 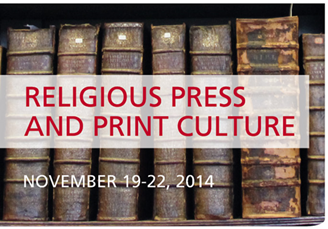 I was thrilled to be invited to this conference, both because I've never been to Germany and because I thought the organizers were asking really great questions in their conference description:

"How do we best approach religious print matter, what questions can such studies answer, and which new perspectives might they open up? ... What roles play individuals like editors, writers, and financiers in religious print culture? What structures underlie and what networks facilitate the religious press? What can we learn about the internal workings of religious groups? How do religious identities emerge and how are they maintained? How is the religious described and communicated? What strategies are employed to draw boundaries or unite disparate movements? How do different genres function within the context of the religious press? By what strategies are events explained and defined and do they impact the larger culture? What is the interrelation and meaning-exchange between a society and a religious subculture?"

These were the kinds of questions I tried to address in my book on The Christian Century, especially all the parts of the book where I discussed circulation campaigns, staffing concerns, and the magazine's perpetually precarious financial state. Pleas for funds or new subscribers, I argued, were the places where the Century editors most explicitly articulated their (and, they hoped, by extension their readers') religious identity. I didn't explain this angle as well as I could have, however. I distinctly recall the members of my dissertation writing group asking, "Why are we reading about marketing again?" For this conference paper, I'll pull those parts of the book together and explain why I paid as much attention to the business side of the magazine's history as to its editorial content.

Because the conference questions also touch on method, let me offer a public service announcement to any of you who do periodical research or advise students doing this type of research: Beware digitization. Yes, it's really handy to be able to perform a keyword search or pull up a scan of an article on your laptop rather than on a balky microfilm reader. But:

1. Digitization is often spotty. There are articles I know ran in the Century that do not show up when I search for them in the digitized version. Perhaps those issues haven't yet been scanned, or perhaps the indexing is faulty. Whatever the reason, the material is not all there in the database.

2. Reading a periodical via a database and reading it as a subscriber are radically different experiences. When a subscriber encounters an article, its context is not every other article written by the same author or on the same topic. The context is what came on the page before it and what comes on the page after it, including pictures and ads. If a periodical research project has any reader-response aspects, the researcher has to try to replicate the original reading experience. Find an archive and flip through the actual, crumbling pages.

3. Some qualities of print periodicals simply cannot be captured digitally. Paper stock matters. Trim size and typography matter. Covers matter tremendously. These variations reveal branding strategies, as well as budgetary decisions, all of which link titles to readers with certain tastes and all of the social class connotations that accompany those tastes. Without access to any market research, you can probably tell instantly which airport-kiosk magazines are aimed at readers with higher or lower incomes, higher or lower education levels, older readers, younger readers, men, women, and so forth. Periodicals in other eras might not have been nearly as savvy at branding, but they generally did try to emulate other titles in whatever editors considered their reference group.

You may now return to your regularly scheduled AAR. I'll not be joining you this year, because, as I might have mentioned, I'm in Germany!
Email Post
Labels: conferences elesha's posts print culture religion and media self-promotion

Paul Harvey said…
Hey Elesha, that conf. sounds great, and thanks for the great post. Also, thanks for keeping the tag I created, "self-promotion," alive; i am glad it has survived my semi-retirement!
November 19, 2014 at 9:02 AM

Anonymous said…
Sounds like a wonderful conference - thanks for this post, Elesha! I wonder if any of the conference conversation (or papers) has turned toward religious _readers_, as well as creators & publishers of religious texts?
November 20, 2014 at 8:06 AM

Elesha said…
Yes, Keith, much about readers in David Paul Nord's method keynote. Some papers give more or less attention to readers depending on research questions and available sources.
November 20, 2014 at 9:14 AM