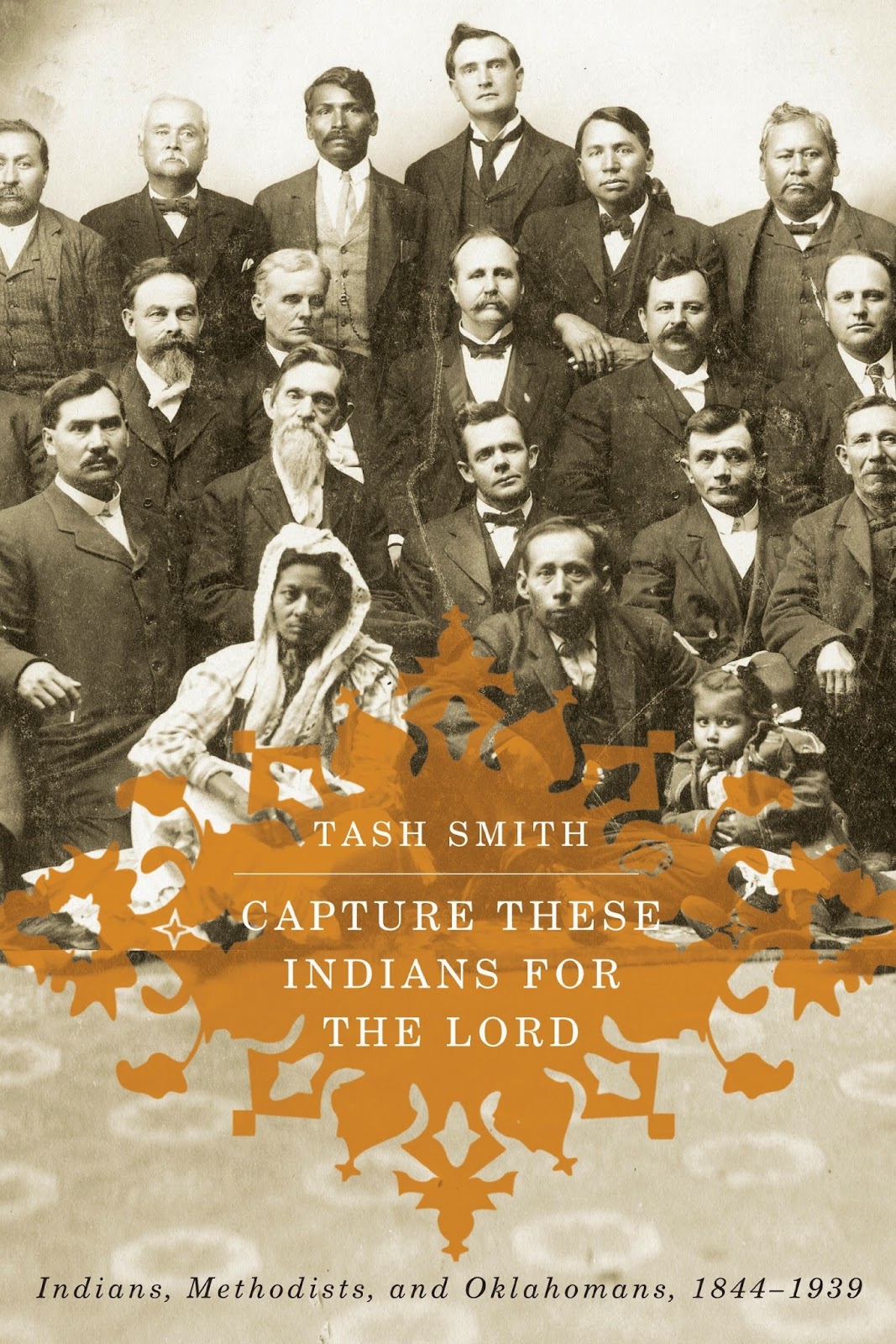 The first session of the official, permanent Religion in the American West AAR group will be meeting in a couple days. What better way to celebrate than by highlighting two interesting new books in the field?

The geographic area of focus for the first book would certainly meet with Paul Harvey's approval. In Capture These Indians for the Lord: Indians, Methodists, and Oklahomans, 1844-1939 (University of Arizona Press, 2014), Tash Smith centers his study on Indian Territory/Oklahoma, examining the "interaction and shared history of the Southern Methodist Church's white and Indian members" from 1844 until 1939. His is a book about the complexities and tensions of the missionization process, Missionaries thought of themselves as altruistic even as they sought to obliterate Indian culture; Indians adopted or affiliated with the Christianity of whites even as they used it to protect, preserve, and promote the religious traditions that the white missionaries were seeking to eradicate.

While Smith frames his book to fit in with prominent recent themes in the study of Christian missions and the encounter between Native Americans and European Christians, he also argues for the usefulness of a narrower denominational scope. Just as it is important to "avoid the monolithic or essentialized idea of 'Indians,'" Smith writes, "it is equally important to discern denominational differences...and avoid the larger monolithic terms of 'Christian' and 'Protestant.'" Thus Smith studies one specific denomination, the Southern Methodist Church, and its Indian mission efforts, which were concentrated in Indian Territory/Oklahoma. This specialized focus enables Smith to zero in on what, exactly, the "it" was that Cherokees, Choctaws, Creeks, Chickasaws, Kiowas, and Comanches in Oklahoma used to their own ends: the institutional structures created by the Southern Methodist Church.

Smith's narrative depicts the twists and turns of the Indian Mission Conference, created in 1844 (right before the North/South Methodist split), as it developed over the nineteenth and early-twentieth centuries. In Smith's telling, Methodist leaders created the IMC with assimilation in mind. They believed that by giving frontier, Indian-dominated territory the status of an official conference, it would encourage Indians (most of whom had been forcibly relocated in the previous couple decades) to live up to the behavioral expectations of white Methodists.


Although white men maintained control of the important administrative and leadership positions within the IMC, the reality on the ground was more complicated. The sheer numerical dominance of Indians meant that IMC leaders and missionaries had to rely on Native preachers and interpreters, and they often had to bend to the wishes of Indian communities. That began to change in the decades after the Civil War when Southern Methodists joined other whites surging (once again) into Indian lands, slowly moving the needle towards a white-dominated IMC: the last year in which the IMC had more Indian members than whites came in 1889. In the following years Southern Methodists participated in and promoted the destructive allotment policies that deprived Indians of land. They also sought to make the IMC more respectable and legitimate in the eyes of the national conference by limiting Indian autonomy and by shifting the focus of their ministerial work to white communities instead of Indian communities. This led to a decline in Indian affiliation with Southern Methodism -- indeed, the denomination completely disappeared among the Cherokees in the early twentieth century. In the years after 1918, however, Indian Southern Methodists (particularly Kiowas and other Plains Indians who had been forced into the Territory in the late 1880s) asserted themselves more forcefully within the organizational structure of the church and helped to revitalize Indian involvement in the IMC.

Smith's descriptive approach is full of keen analysis and fascinating vignettes. One of my favorite stories, highlighting the competition over Indian missions between Southern Methodists and other denominations, came in the last chapter. There, Smith tells of Norton Tahquechi and White Parker, two Comanches who in the early 1930s became licensed ministers in the IMC. The two showed no concern for Protestant denominational tensions regarding who had control over missionary efforts in Indian land: according to a petition drawn up by Tehquechi's supporters, Comanches were "not wards of any Church" but were "free moral agents before God." Thus, there was no need to worry that Tehquechi's Southern Methodist church was encroaching on an area that "belonged" to Reformed and Reformed Presbyterian churches.

White ministers from competing denominations complained bitterly about Tehquechi and Parker, whose efforts on behalf of the Southern Methodist church were tantamount to "invad[ing] territory already allocated." If the Southern Methodist encroachment was not halted immediately, "we are doomed to a small constituency," a Reformed Church missionary wrote.

Of course, before denominations could map out their own boundaries of religious influence, they needed the U.S. government to create, recreate, and enforce the boundaries of Indian Territory/Oklahoma. Nearly all of the Indian nations targeted for mission work were forcibly moved by the U.S. government to the land that eventually became Oklahoma. What's more, the treaties that the U.S. government signed with the Five Tribes after the Civil War included provisions that required an openness to Christian missions. And in various laws related to allotment, Congress gave special privileges and land access to churches. In short, although Smith does not often pause to reflect on or theorize about connections between empire, geography, and religion -- those elements were not the primary part of his project -- they nevertheless loom large over his narrative. 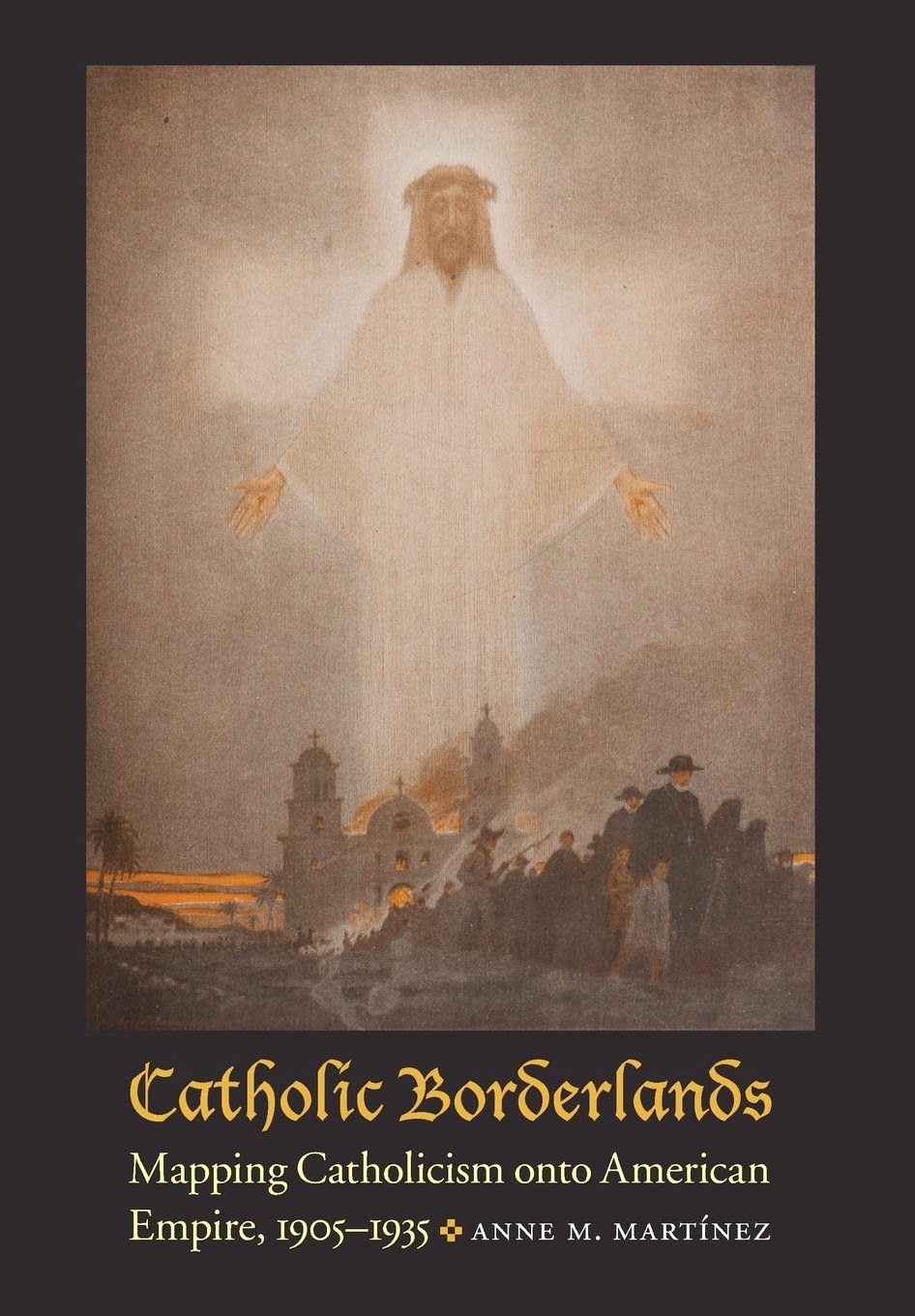 Anne Martínez's Catholic Borderlands: Mapping Catholicism onto American Empire, 1905-1935 (University of Nebraska Press, 2014) is much more explicit about connecting empire and religion, and much more expansive in geographic reach. Her book, styled as "an institutional, intellectual, cultural, and diplomatic history of U.S. Catholic interest and involvement in Mexico," focuses on U.S. Catholic participation in American expansion during the first few decades of the twentieth century. In their efforts, U.S. Catholics helped to create a Catholic borderlands, a "trans-imperial, transhistorical space built on the Spanish Catholic past but enhanced by a U.S. Catholic presence in the early twentieth century."

The central figure in Martínez's narrative, Francis Kelley, was a Canadian Catholic priest who moved to the United States in the 1890s and founded the Catholic Church Extension Society in 1905. Kelley created the Extension Society with the goal of recruiting urban Catholics to support rural Catholic endeavors. Through the pages of the Extension Society's official publication, Extension Magazine, Kelley laid out the Catholic claim to the U.S. West by articulating a narrative of self-sacrificial and benevolent Spanish mission work that predated the Protestant American enterprise. In so doing, Kelley provided urban Catholics in the Northeast and Midwest an opportunity to link themselves with Catholics in the Southwest and to participate in U.S. expansion, but in a Catholic way. By protecting Indian Catholics from Protestant poachers, Kelley argued, urban northeastern Catholics could prove themselves to be the true upholders of the progress and civilization of the Indian, a process that had begun under the Spanish.

Kelley did not confine his efforts to the formal borders of the United States. Instead, as Martínez put it: "Wherever the U.S. expansionist project went, Kelley followed to subvert the Protestant mission with his Catholic one." This included Puerto Rico, the Philippines, and, most importantly, Mexico. The anti-clericalism of the Mexican Revolution and the subsequent surge of Mexican Catholics crossing over into the United States provided Kelley with his most prominent project. He became the official spokesperson for the Mexican clergy in the United States, and he pushed and prodded U.S. Catholics and the U.S. government to become actively involved in the maintenance and protection of Catholics in Mexico.

Kelley was not Martínez's only subject of interest. For example, she also analyzes "religious Monroeism" -- that is, the actions of U.S. officials to support Catholics in Mexico during the upheaval of the 1910s and 1920s. Even so, Kelley was the pivotal figure for Martínez in the development of a Catholic borderlands, "a space where multiple imperial projects -- Spanish, U.S., and a twentieth-century U.S. Catholic empire -- redefined the geopolitical landscape of U.S. territorial, social, cultural, and political reach."

There is certainly much more to be learned from reading this ambitious and insightful book. No doubt it will be of great interest to folks interested in religion and empire, U.S. foreign policy, the American West, and/or Catholicism. I would also be interested to see how Catholic Borderlands connects with Roberto Ramón Lint Sagarena's recent book Aztlán and Arcadia: Religion, Ethnicity, and the Creation of Place (NYU Press, 2014). I have not yet had the chance to read it, but the description is intriguing:


"Many Protestant Anglo Americans understood their settlement in the far Southwest as following in the footsteps of the colonial project begun by Catholic Spanish missionaries. In contrast, Californios—Mexican-Americans and Chicana/os—stressed deep connections to a pre-Columbian past over to their own Spanish heritage. Thus, as Anglo Americans fashioned themselves as the spiritual heirs to the Spanish frontier, many ethnic Mexicans came to see themselves as the spiritual heirs to a southwestern Aztec homeland."