Today's guest post is written by Brian Franklin, Associate Director of the Center for Presidential History at Southern Methodist University. In this post Brian recaps the recent Religion and Politics in 21st Century America conference co-sponsored by the Center for Presidential History and the John C. Danforth Center on Religion and Politics. Interested readers will want to stay tuned for more to come out of this conference: C-SPAN will broadcast the conference and there is a forthcoming edited volume in the works. 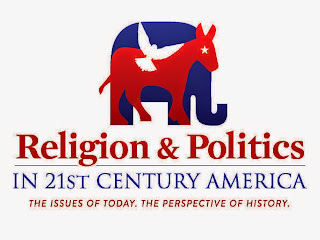 On November 6, sixteen scholars and hundreds of Dallas-area residents came together at Southern Methodist University for "Religion and Politics in 21st Century America," a conference featuring a keynote address by Senator John Danforth. The conference was co-sponsored by the Center for Presidential History at Southern Methodist University and the John C. Danforth Center on Religion and Politics at Washington University in St. Louis. Thanks to the editorial leadership of Darren Dochuk and Matthew Sutton, we will soon see the fruit of these presentations in a publication with Oxford University Press.

The limits of time and space prohibit me from doing justice to every presentation from the day. You can view the complete lineup here, and soon, C-SPAN will be broadcasting the conference in its entirety.  For now, allow me to highlight three themes that the stood out amongst the sixteen presentations.


The first theme to arise was the way in which 21st-century evangelicals' reading of the Bible has influenced the way they approach politics. Kate Carté Engel argued convincingly that Protestant evangelicals' belief in a "harmonious reading" of Scripture has heavily influenced the way conservative Christians read, interpret, and teach the American Revolutionary Era: as a morality play meant to effect "prayerful change" today. This harmonious reading of both religion and politics echoed clearly in presentations by Darren Dochuk and Mark Chancey. Dochuk told the story of four "Crude Awakenings" in the modern age of oil, culminating in the stories of mid-century wildcatter-oilmen, and present-day religious energy moguls, both of whom approach their pursuit of oil and religion through independent, self-reliant, distinctly Protestant practices. Chancey's harmonious readers appear in the form of members of the Texas State Board of Education who since 2010, have sought to teach American history in a way similar to their reading of the Bible: as a story of virtually uninterrupted freedom and prosperity, fueled primarily by Christianity.

A second prominent theme that emerged from the day was that of continuity. Spencer Fluhman spoke of "never-ending Mormon moments" in American politics, Charles Irons charted a common view of "good religion" among presidential candidates from Thomas Jefferson to Mitt Romney, and Rebecca Goetz commented on the jack-in-the-box nature of Islam in America, seemingly rising into public consciousness only at negative political moments.   From Billy Graham in the 1940s, to David Koresh in the 1990s, to Harold Camping just last year, Matthew Sutton argued that one commonality has tied many Christians together: premillennial apocalypticism, which has consistently appropriated current political issues to reinforce eschatological views. Likewise, Jennifer Graber drew parallels between the past and present. From mid-19th century Indian wars to Obama-era drone wars, Americans religious and political groups have critiqued the enemy's male-dominated culture (whether Cheyenne or Afghan), and also expressed the desire for women's freedom within that culture. All the while, this practice of "imperial domesticity," has had to reckon with the fact that these same women's homes are often the targets of American-led death and destruction.

Perhaps half of the papers argued for, or at least signaled toward a third theme: a potential turn in the relationship between religion and politics during the presidency of Barack Obama. Andrew Preston, Edward Blum and Matthew Hedstrom each noted that the relationship between American religion and politics, although historically dominated by Protestant evangelicalism, seems to be leveling out during Obama's presidency.  Kevin Schulz marveled at "the almost casual way" that Americans have come to accept religious pluralism as the new norm. He cited most prominently the surprising lack of debate over the appointment of Sonia Sotomayor to the Supreme Court, which marks the first time in U.S. history that not a single Protestant sits on the bench. Steven Miller closed the academic portion of the conference with a perceptive take on this tentative turn during the Obama presidency. While Obama's candidacy promised the possibility of dethroning evangelicalism as the kingmaker in politics, the "end of the evangelical age" will not come any time soon, not so long as major issues (abortion, most notably) remain politically unresolved.

The conference closed with a keynote address from John Danforth, former U.S. Senator from Missouri, Ambassador to the UN, and an ordained Episcopal priest. Danforth opened with a story about how after he published his first book Faith and Politics in 2006, Rush Limbaugh devoted a half-hour of his program to criticizing him, claiming that Danforth essentially wanted religious people to get out politics. Of course, Danforth explained, he wants the opposite, provided that people practice one thing which Limbaugh does not: civility. In a series of delightful vignettes about his time in the Senate with the likes of Russell Long, Bob Dole, and Howard Baker, Danforth emphasized the importance of keeping the "ultimate things" of religion and the "transient things" of politics separate in order to accomplish tasks together. Danforth left unspoken the difficulty of dealing with issues which are defined as "ultimate" to some, and as "transient" to others. Still, his call for compromise as "a good thing in everyday life," combined with excellent historical analysis and advice from our sixteen scholars, served as a breath of fresh air in today's often toxic religious and political spheres.
Email Post
Labels: 21st Century Center for Presidential History Danforth Center on Religion and Politics religion and politics