Chaplains of the Spiritual

I've recently had a chance to start working my way through Winnifred Sullivan’s new book, Ministries of Presence: Chaplaincy, Spiritual Care, and the Law (Chicago, 2014). It’s a thought-provoking project, and I wanted to offer some early reflections. 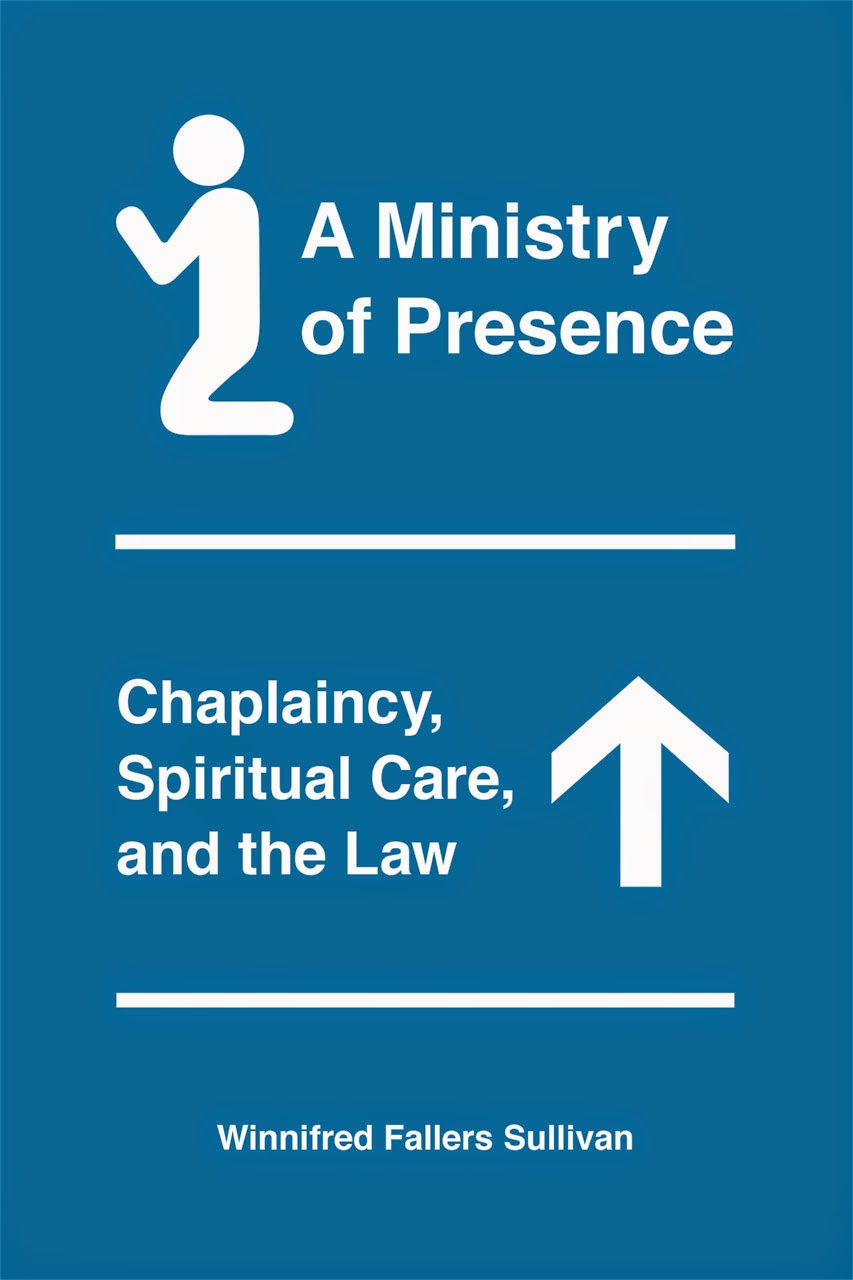 When thinking about hot-button issues in American religion and law, chaplaincy programs probably don’t come to mind. Chaplains are as ubiquitous as they are uncontroversial. And, in a sense, this is Sullivan's starting point. While a great deal of ink (pixels?) has been spilt decrying/celebrating the Hobby Lobby decision, Sullivan sees chaplaincy programs as important precisely because they go largely unremarked upon. Sullivan looks at a variety of chaplains in a number of settings in the contemporary United States, including (but not limited to) chaplains working in the military, healthcare, and prisons. Drawing on Foucault's idea of pastoral power, Sullivan also notes that while these settings may have unique qualities, they also have more than a little in common.

Chaplains, in Sullivan's telling, inhabit a peculiar legal space. They embody the compromises—at times quite awkward, arbitrary, and unclear compromises—that populate "ordinary law," the law lived out in everyday situations below the level of the Supreme Court (13).  The widespread and self-evidently appropriate reliance on chaplains in, say, the United States Army, local hospitals and—last but not least—the Maine Game Warden Service is in some sense the result of America's peculiar history—halting, reversing, sputtering—with disestablishment.

Sullivan employs the metaphor of the "broker" to describe the role of chaplains in contemporary settings. Chaplains sit at the intersection of the secular employers that regulate them, the religious hierarchies that train and certify them, as well as the individuals with whom they work—who in many cases have their own ideas about the role and functions of the chaplains ministering to them. Sullivan demonstrates how this attention to the "spiritual" components of human life—rather than the "religious"—provide chaplaincy programs with legal space in which to maneuver. Such assumptions about the universal spiritual nature of people enable different metrics of spiritual care and assessment, a theme Sullivan takes up throughout the book.

The institutional place of the chaplain combines with the language of "spirituality" to successfully navigate a variety of First Amendment obstacles. This is key to the chaplain’s ubiquity. Terms like "spiritual care" blur the legal difference between religion and spirituality. Sullivan demonstrates how spiritual care is perceived as both a public good (something necessary for the preservation of good order) and a commodity (something measured, assessed, and exchanged). In this understanding, if something is spiritual, it is universal and available to all—and thus sidesteps First Amendment restrictions about religion, which is necessarily divisive and partisan.

Sullivan also details the context in which these changes are taking place. "Religious freedom, legally speaking, now increasingly means government providing opportunities for Americans to encounter their religious selves and realize their religious commitments" (3). The place of chaplains in American life is inextricably linked to broader changes in American culture, including a Supreme Court that sees religion as "being neither particularly threatening nor particularly in need of protection" (17). In this way, a retreat from the high-water mark of legal separationism in the mid-twentieth century has created its own peculiar institutional arrangements. "Disestablishment," Sullivan writes, "has once again produced a new establishment" (2).

Sullivan is engaged in several historiographies. This is reflected in rich footnotes (which include at least one Monty Python reference) throughout the book. The history of American religion and law receives attention of course, as does the study of chaplains and chaplaincy programs in their own right. There are also useful insights for those interested in the secular, and Sullivan’s arguments draw from John Modern’s Secularism in Antebellum America (2011), Elizabeth Shakman Hurd’s The Politics of Secularism in International Relations (2008), and Tracy Fessenden’s Culture and Redemption (2006). Also of note is Sullivan’s effort to contextualize "spirituality" in terms of both American law and American religious history. Here, Sullivan is in conversation with other friends of the blog, including Courtney Bender's The New Metaphysicals (2010) as well as Leigh Schmidt's Restless Souls (2005).

To paraphrase Jeff Goldblum in Jurassic Park, “Law, uh, finds a way.” Contemporary chaplaincy programs demonstrate that practices termed “spiritual” are not unique to the political left or right, and chaplains from a wide variety of institutional backgrounds are grappling with how to provide this "spiritual care." A Ministry of Presence makes clear that this grappling has a particular history, and in so doing makes a valuable contribution to the study of American religion.