Millennials and the Question of a Valuable Future 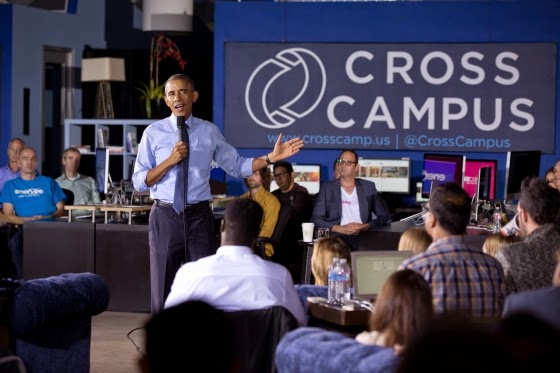 With the fall election season upon us, the White House rolled out an initiative to connect President Obama with “millennials,” those voters who were born since 1980. This included an appearance at Cross Campus in Santa Monica, California--a creative, collaborative workspace for entrepreneurs. The centerpiece of this effort is “15 Economic Facts About Millennials,” a nearly 50-page report by the President’s Council of Economic Advisers. The verdict: the economy will make things tough for these idealistic students, but they will be much better off in the future, because they will at least have health care insurance. The challenges of finding value in future career fields is nothing new for traditional-aged college students. But these studies point to a frustration for idealistic students who seek to use technology to accomplish "big things" with their lives.

The White House report is a useful study for interpreting the values of traditional-age college students, especially when compared with a nearly 150-page 2010 Pew Research Center Study: “MILLENNIALS: A Portrait of Generation Next- Confident. Connected. Open to Change.” Both studies highlight the entrepreneurial spirit of young people who came of age in a time when Internet and smartphone technology were ever present. But the obstacles to seeing this generation reach its potential include massive student loan debt and irrelevant college degrees that do not match up with the marketplace needs of the future. 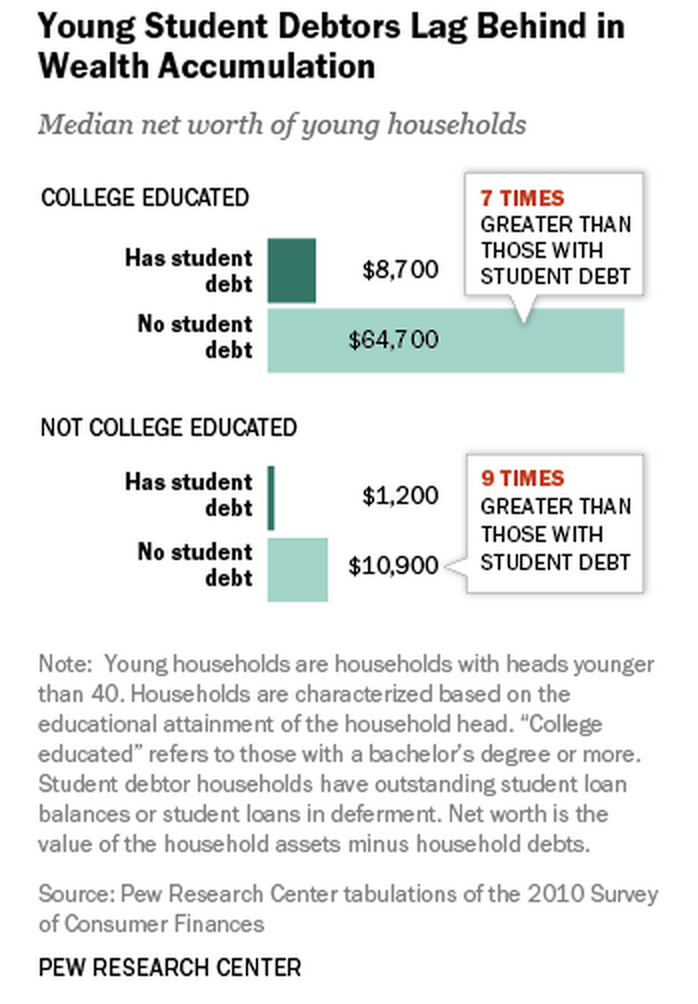 Further research on the value of college majors by the U.S. Census Bureau’s American Community Survey (ACS) shows that times are tough for students who choose to study humanities, religion, history and other liberal arts majors. But that does not mean that students are flocking to STEM or technology-centered majors. The White House study puts it this way: “Millennials are more likely to study social science or applied fields—like communications, criminal justice, and library science—that do not fit into traditional liberal arts curricula, but correspond more directly to specific careers.” Students are driven by marketplace concerns, including the rampant rise of student loan debt, which Pew Research states is at its highest saturation point on record: 37% of U.S. households “headed by an adult younger than 40 currently have some student debt.”

According to the ACS, the lowest career earnings follow students who major in service fields such as education, theology and religion, and ministry. Changing your major can dictate millions of dollars gained or lost in your future career. However, the most satisfying work may not be the highest-paying jobs. At 93%, pastoral ministry was the field that was identified as "most meaningful" by respondents to a Payscale survey. 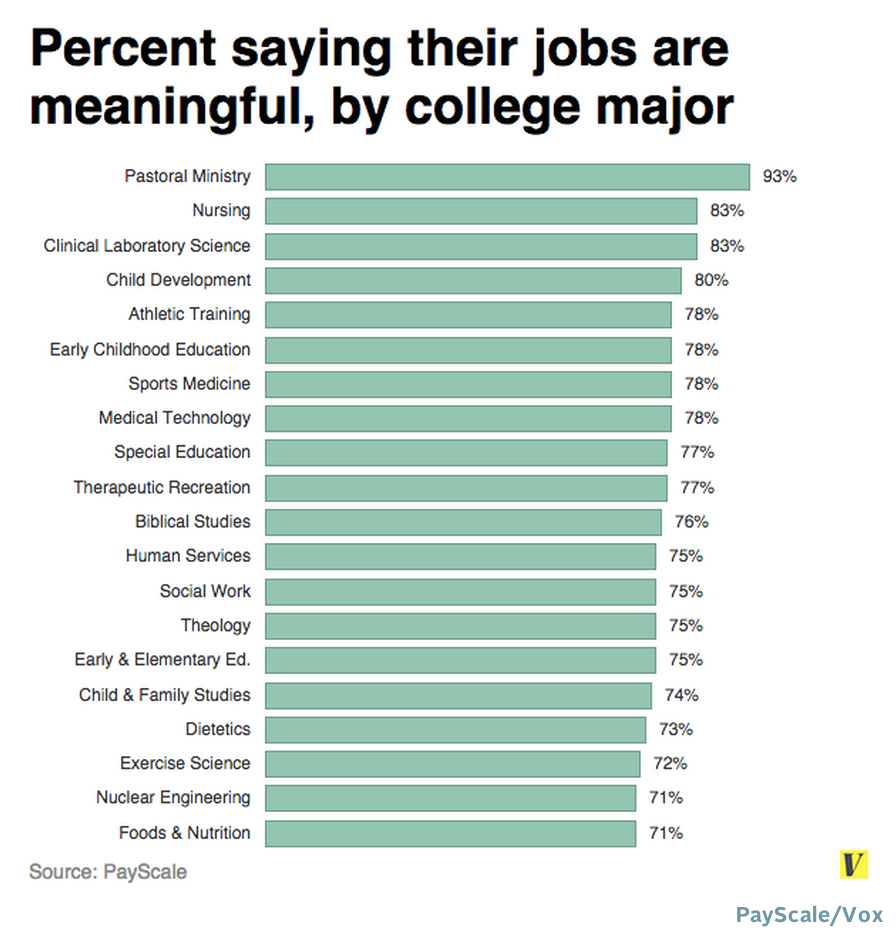 As scholars in the humanities advise students who are seeking a rewarding career path, these data are useful in helping to anticipate the challenges of the future. How can the study of religion, history, and other liberal arts shape students who are considering their future earnings, debt load, and opportunities for a lucrative career?  The abundance of facts and charts appear to usher in a diminished role for religious studies, the arts, and humanities. Despite the bleak outlook, the liberal arts need not be opposed to technology or applied learning fields.

Defenses of the arts and humanities are coming from diverse points of view. In one case, Facebook’s decision to stand by its policy to deny “false names” on its site ran afoul of users who sought to use a drag queen pseudonym on their Facebook account. This was criticized as a cold technology policy that failed to consider the value of the personal needs of its users. The humanities need not stand in opposition to technology, but can enhance the value of data and information flow by framing information in a human perspective.

A different argument comes from Makoto Fujimura, a visual artist who makes Christianity a theme in his work. Fujimura has written a defense of creativity and the arts that can also apply to the humanities and liberal arts. He critiques “utilitarian pragmatism” as the enemy of the arts and of culture as a whole:

The assumption behind utilitarian pragmatism is that human endeavors are only deemed worthwhile if they are useful to the whole, whether that be a company, family or community.  In such a world, those who are disabled, those who are oppressed, or those who are without voice are seen as "useless" and disposable.  We have a disposable culture that has made usefulness the sole measure of value.  This metric declares that the arts are useless.  No-the reverse is true. The arts are completely indispensable precisely because they are useless in the utilitarian sense.

This does not mean that the arts and humanities must necessarily strive to be obscure or irrelevant. Technology and the market become ineffective and insulting when they fail to address human preferences. So too, the value of a college education is not solely defined by its gateway to future income. As millennial students wrestle with questions surrounding the usefulness of their degrees and potential for the future, scholars in the humanities can help by reading good data and interpreting it in a way that brings historical perspective and humanness to the conversation.
Email Post
Labels: arts Barack Obama Christian colleges humanities liberal arts michael hammond's posts millennials religion and economics

Gadfly said…
A few semi-corrective notes from someone who knows.

1. In a mainstream Protestant denomination, at a church of any size, pastoral ministry is not totally a poor man's job. You usually have a free parsonage/manse, or if not, a nice housing allowance in addition to base salary. You usually also have a generous auto allowance. You are likely to have a denomination-based pension, albeit of a 401K type. You may have your local congregation also create an IRA, or a life insurance-annuity or something.

Bottom line is that, at a congregation of any size, you're likely to be making more than a public school teacher, at least. (Now, I said "of any size." If you have a church of less than 200, with less than 100 average Sunday attendance, maybe not. But, if your church has at least, say, 300 members, what I said above is true.)

2. Yes, it's long, and sometimes weird, hours. But, in addition to the more generic joy of being in a "helping" position, you're also pretty much self-employed without the downside of being self-employed at a for-profit company. You're also in a position with a lot of power, control and authority.
October 11, 2014 at 9:51 AM