On September 24, 2014, Charlotte Clinton Mezvinsky was born, and Chelsea Clinton and Marc Mezvinsky became parents. They became something else as well: interfaith parents. The couple has not made any announcement about their plans for Charlotte’s religious upbringing, and, because she is a girl, no bris (or lack thereof) has given the media a hint about their plans. Regardless of whatever the parents choose for Charlotte (and whatever Charlotte ultimately choses for herself), just as the Clinton/Mezvinsky wedding provided a moment to reflect on the status of interfaith marriage in the United States, Charlotte’s birth provides an opportunity to take the temperature of the country on the question at the heart of interfaith marriage: What about the children? 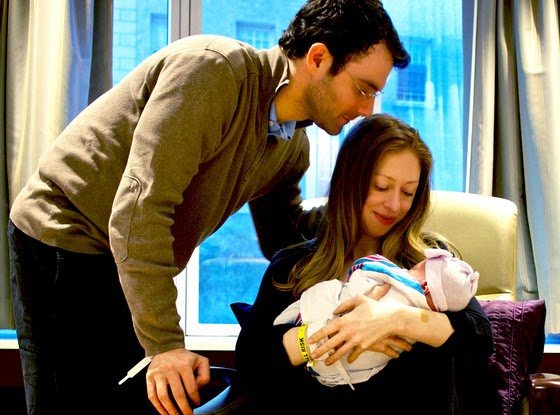 In some ways, the responses to Charlotte Clinton Mezvinsky’s birth and prospective religious upbringing tell us nothing new. Orthodox Jewish newspapers such as The Jewish Press announced the birth with the explicit headline “Chelsea Clinton Gives Birth to a (Non-Jewish) Baby Girl.” This article takes the position of Jewish law, as understood by the Conservative and Orthodox movements, that Judaism is transmitted matrilineally: Chelsea Clinton is not Jewish and therefore neither is baby Charlotte, although either one would be free to convert.

The Reform and Reconstructionist movements do not require matrilineal decent for a child to be considered Jewish—rather, they require that the child have one Jewish parent and that the child be given a Jewish upbringing. While the particulars of what that might mean is open to interpretation, most agree that some formal Jewish education would need to be involved. In fact, even though the Conservative movement requires conversion in order for a child with a non-Jewish mother to become Jewish, many Conservative communities and rabbis welcome interfaith families and educate the children, whether or not their mothers are Jewish.  To that end, they allow the children of these marriages to convert before a bar or bat mitzvah if they were not converted as infants. For many American Jewish children from interfaith marriages, it is the education of the child, and not the religion of the mother, that determines the child’s status in the community.

In contrast to The Jewish Press, Haaretz, the slightly left-leaning and highly regarded Hebrew language newspaper, does not take a stand on the religious identity of little Charlotte.  Instead, the secular Israeli daily details the various positions in the debate before pointing out that, Jewish or not, Chelsea’s daughter has one Jewish parent and is therefore eligible for Israeli citizenship. Religion is unimportant; what matters is the continuity of a state where the relationship between religious observance and its own version of secular Jewish culture is, at best, complicated.

The newest voice on the interfaith marriage scene strongly advocates for people raising children in both of the parents' traditions—a trend that I write about in my own work, including in this blog.  If baby Charlotte’s birth tells us anything about the conversation on interfaith marriage and childrearing in the contemporary American moment, it is that the option of being raised Jewish and Christian is increasingly accepted. ABC News is betting that Clinton and Mezvinsky take the “both” option, noting that Chelsea Clinton is involved in a range of interfaith activities. Indeed, Clinton is on the advisory board of NYU’s Of Many Institute for Multifaith Leadership, which “concentrates on cultivating cross-cultural leadership experiences, with a focus on students who seek to develop a multifaith space that ensures harmonious relationships on campus.” Clinton has been quoted as saying that the topic is of particular interest to her because her husband is Jewish, she is Christian, and they are both practicing their religions. Certainly, their wedding, at which a rabbi and a minister co-officiated, suggests that the couple is comfortable with the “both/and” approach. In this way, the Clinton-Mezvinskys are no different from many other couples.  Such families often operate on their own, sometimes joining two different religious communities, and sometimes joining one of the interfaith communities that exist in a number of large US cities, including New York, where the Clinton-Mezvinskys currently live.

In many ways, then, this family—while extraordinarily well connected and certainly high profile—remains unremarkable in their choices among the options presented to them.  What was more surprising, however, was the response of Jewish clergy to this new family.  Indeed, the fact that, on the “pages” of the liberal yet fairly mainstream Huffington Post, at least one rabbi spoke out in favor of the "doing both" option, speaks to a profound shift in interfaith family life. Rabbi Evan Moffic wrote that having no faith tradition will deny the children both of their rich heritages.  Furthermore, he questioned the previously held dogma that doing both would leave the child psychologically confused. Not everyone agrees with Rabbi Moffic, but the fact that there is space for such an opinion represents a major shift in and of itself, from the conventional thinking of as recently as ten years ago.

In considering the questions facing Chelsea Clinton’s child and her parents, I found myself thinking that her primary challenge will not be Jewish or Christian, double or nothing, but rather how public all of these decisions will be. For many children of interfaith marriage who are raised as Jews, it is not hard or painful to have non-Jewish relatives. Rather, the difficulty lies in their potential rejection as Jews by the Jewish community. For children raised in liberal Jewish settings, patrilineal descent is usually readily accepted; the child’s status as a Jew is therefore not an issue. In many more traditional settings, contemporary communities try to be sensitive to children with non-Jewish mothers, and there is some privacy around one’s status as non-matrilineal Jew (and therefore potentially as a convert). For families practicing multiple religions, there is support from communities in which many people combine multiple faith traditions, sometimes because of marriage and other times because mom and dad are Christian and regular attenders at a Zen center, or Jewish with a penchant for yoga. Children in those communities can therefore be protected from the disapproval of other communities. But for Charlotte Clinton Mezvinsky, there will be no such privacy. Everyone will know that her mother is not Jewish, and so everyone will know that she will not automatically have that status with all other Jews. At the same time, if she is raised Christian, her father will be very publically contributing to what is referred to as the “problem of Jewish continuity.” And if she is both or neither, plenty of others with strong opinions will weigh in.  For the only grandchild of a former president and a likely presidential candidate, no decision is private.  Ultimately, then, the extraordinary aspect of Charlotte’s upbringing may not be the choices that her parents make but the way that public commentary on those choices give us a window into the countless American approaches to interfaith marriage.