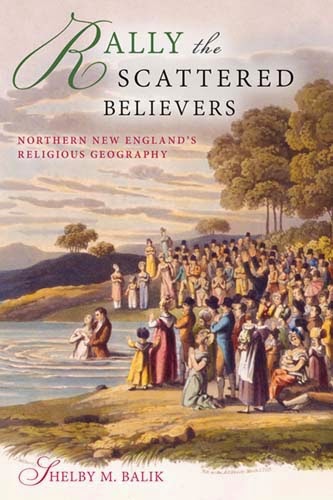 I finished reading Shelby Balik's Rally the Scattered Believers: Northern New England's Religious Geography (Indiana University Press, 2014) a few weeks ago, and I've been reflecting on it often ever since. I think this is a book that will interest many RiAH readers, so I'd like to give it some attention.

Set in Vermont, New Hampshire, and Maine in the years between 1780 and 1830, Balik analyzed the religious geography of the region, or “the many ways in which denominations and churchgoers organized their communities spatially." In Balik's telling, two competing religious geographies battled (or rather, denominations representing those geographies battled) for power in the region. On one side stood the town-church system represented by the Congregationalists. Enshrined in laws and practices inherited from southern New England, in this system the religious community was "organically rooted in a particular place" with both believers and non-believers within the town's boundaries joined together in a "common spiritual endeavor."


On the other side stood the itinerant system, represented especially by Freewill Baptists, Methodists, and Universalists (regular Baptists enter the picture here as well, but they are depicted as occupying more of a middle-ground between the town-church and itinerant systems). The practitioners of this system “did not plant spiritual roots in specific physical places" and had a tendency to "forge religious ties that transcended town borders.” In Balik's view, the changes to northern New England's religious landscape in the early nineteenth century were not determined by a new democratized theology, doctrinal disputes, or disestablishment. Rather, they were determined by the way denominations mapped out new religious communities and "negotiated new physical and spiritual ground."

Balik devoted the first two chapters to a detailed description of the town-church and itinerant systems. She was well aware that the ideal form of each system did not always match up with reality, but she made a strong case for the usefulness of her categories and for fundamental differences in the way that each denomination organized space. Following the two descriptive chapters, the rest of the book focused on places of contact and conflict between the two systems, which ultimately resulted in the itinerant-dominated convergence between the two (chapters 3, 5, and 6). Balik also examined how the laity "superimposed their own religious geography" on the landscape, often without consideration for the ideals of the town-church or itinerant systems (chapter 4).

For people interested in religion and law, the third chapter might be especially interesting. There, Balik took on the issue of disestablishment. Going state by state, she argued that even though the elimination of ministerial taxes brought about the end of a "de jure preference" for Congregationalism, disestablishment was an incomplete and complicated process. In fact, as Balik showed, the three states in northern New England continued to implicitly support the town-church religious geography (and thus, Congregationalism) by keeping in place laws that gave the rights to a town's ministerial land and meetinghouse to territorial parishes (those organized as geographic/spatial units, i.e. the original town churches which tended to be Congregationalist). Thus, in Balik's view, disestablishment was not a cause or reason for the growth of Methodists and Baptists in the region in the early 1800s. Instead, it was an obstacle: their growth occurred in spite of the lingering legal advantages provided to Congregationalist churches.

There is plenty more that could be said of this deeply researched and meticulously sourced book. I'll leave definitive assessments of the strengths and weaknesses of Balik's arguments to those who are more well-versed in the scholarship related to this time period and region. However, for my purposes, reading Rally the Scattered Believers helped me to consider anew the centrality of place -- and the differing ways that religious organizations organize space -- in understanding religious history. It is a perspective that I've already found useful as I think about my subjects of study, subjects who occupied space half a century later and half a continent away.
Email Post
Labels: 19th Century new books new england putz religion in the early republic religious geography