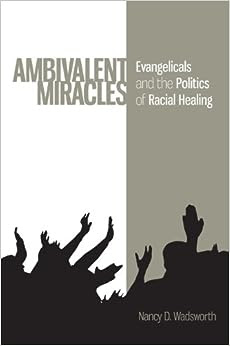 Since the 1980s, few evangelical Christians concerned with racial reconciliation and racial justice have mustered their efforts in the political arena.  Nancy Wadsworth's new book Ambivalent Miracles: Evangelicals and the Politics of Racial Healing explores this seeming paradox.  Last month I interviewed her about her new book and promised the second part of the interview this month.  Here is goes:

Karen Johnson: How central is the framing of race as a black/white binary in American history to the development of evangelical racial change efforts, and to today's on-the-ground reality?

Nancy Wadsworth: What we need to understand about the black/white binary is that while it is less relevant to race relations within Christianity today—because of course the American racial mosaic is complex and variegated far beyond black and white—it matters a lot for thinking about how the deep racial divide within American Protestantism developed, and why it has been so difficult to bridge. (Mind you, this is not just the case for evangelicals, though that is the focus of my book. The same patterns repeat within American Catholicism and the mainline denominations.)

It is easy for us to forget that almost all American denominations fractured over, first, the question of slavery, and then, with emancipation, the issues of citizenship, integration, and civil rights for African Americans. These were core questions around which Protestants, like the nation and as the largest religious group within it, fought virulently. With Native Americans effectively relocated to the margins of American life by the mid-Nineteenth Century, racial fractures within American Christianity developed along the black-white binary. And to a very serious degree, whites developed their racial identity and sense of superiority in contrast to the group designated as their opposites: blacks, whose humanity was so disregarded that enslaving them was seen as not only justified but also, in many cases, as a prerogative of good Christians. That is why most of the denominations we know today, especially on the Baptist and Methodist side of Protestantism, literally were created based on their defense or repudiation of slavery. Black denominations grew directly out of that fracture, on the liberation side. The SBC, for example, was explicitly founded on the pro-slavery side of the racial divide. Similar fractures occurred in the Pentecostal tradition as it split over questions of integration in the early twentieth century.

But we have to go back even further to understand the influence of what I call (following historian Paul Harvey) the major religious racial traditions in American history. The reason Indian removal, slavery, and all the other examples of race-based violence and subordination could happen in a Christian nation in the first place is that Christians found ways to justify a white supremacist order through theological interpretation. Even white Christians who fought racist practices and institutions often did not, until well into the twentieth century, develop worldviews that could conceptualize, much less endorse, full racial equality in integrated settings. That is called theological racism in the book. A lot of white evangelicalism descended from this—which, like white privilege itself, is a really hard truth for subsequent generations to take stock of. Yes, some Christians did recognize slavery and other racist institutions as unbiblical and fought alongside African Americans for liberation. That’s part of the religious racial justice tradition—but, if we’re honest, it is better represented in the mainline than in evangelicalism.

Karen Johnson: How do evangelicals' customs and etiquette shape the possibilities for multi-ethnic collaboration?

Nancy Wadsworth: The big thing I learned from more than a decade studying evangelicals involved with racial change is that white evangelicals are usually not very well prepared to deal with tension and conflict within their communities, and until they learn healthy ways of navigating those things, they probably won’t be very effective in their multiracial church and/or reconciliation efforts. Because tension and conflict are inherent to this work, and different cultures have very different ways of living with it. I don’t want to overgeneralize here, but in many African American communities there is a value of bringing tension out into the open and turning it over together. There is a value in expressing emotion, and raising one’s voice isn’t necessarily seen as aggressive. In Latino communities there are other distinctive patterns, which can differ along ethnic lines. Different communities also create different spaces for the voices of women in community discussions. But in many white evangelical communities, especially the theologically and socially conservative ones, there is a huge emphasis on lines of authority.

I tell a story in the book about “Gordon,” a young black man who the church was trying to raise up as a leader. When he started to take issue with the way some things were being done—the persistent whiteness of the worship service (even though they made attempts to diversify it); the lack of black voices in leadership; the lack of black influences in the sermons—it turned out that the church didn’t have great customs and etiquette for effectively dealing with what he was raising. Other leaders felt their authority was being “disrespected,” that Gordon should follow the template they had for moving from a junior pastor role to one with more influence. But Gordon had experience that they didn’t: he was black and from the neighborhood that they had only recently moved into. In the end, Gordon left, feeling very disillusioned—though I think in retrospect he was also just tired of working in majority white institutions, which he’d been navigating all his life. The church lost an opportunity. And what nobody really realized at the time was that because so many of the white members had followed the pastor from really conflict-avoidant, authority-driven Independent Fundamental Baptist (IFB) churches, they simply did not have the skills yet to navigate open conflict, to talk about rising tensions—even to folks just speaking out about things they were noticing.

Karen Johnson: What are the contours of the conversations evangelicals concerned with racial change are having about race today?

Nancy Wadsworth: There really is a wide array, because there are all kinds of multiethnic churches cropping up. Some are particular to the communities that assemble under one roof. I met a pastor from a church in Orange County, California composed of a variety of different Asian groups—who often have very old tensions between them—plus ten percent Latinos, and another twenty percent whites. At the time that I interviewed him, their church was thinking a lot about how to create more integrated social activities, because the different communities tended to re-group into their ethnic subcommunities in social contexts. They were also thinking about how to channel their upper middle-class resources into international relief efforts. But in a church that has different socioeconomic classes in it—poor and middle-class people together—those conversations will of course be different. And sometimes people will be avoiding uncomfortable conversations, because diversity can make you feel so good you don’t want to wade into topics that will surface the deep divergences between your experiences or points of view.

As I was finishing the book, I was noticing a few trends. On one hand, the conversations about race in the larger evangelical community, as evidenced in a forum like Christianity Today, had gotten more complex and more nuanced. More room had been created for multiple, even competing perspectives on certain issues, especially immigration. Where there seemed to be only one visible perspective on this in the early 1990s—the white, conservative perspective—today there is room for a much wider array of voices. This seems like considerable progress.

On the other hand, though, white evangelicals are still dominant in a lot of multiethnic church communities, and they have some pretty pronounced tendencies to turn energy into what a lot of folks of color in my book called “programs and projects.” The church growth movement has trained a lot of ministers into ambitious entrepreneurs. So you see things like job training programs, nonprofit fatherhood initiatives, coffee shops, and other small businesses linked in some way to the church. And all this can be very productive, obviously, but does it, I wonder, have a tendency to further insulate the evangelical community, the successful multiracial church in a neighborhood, from the larger social and political dynamics going on in the city—and can it even authorize a kind of ongoing myopia about the policies and politics that impact inequality? If all your “solutions” are coming through the wraparound church, how much can you engage in the larger conversations that need to happen, and in which the voices of Christians really doing multiracial work might really be valuable? Also, how important is it for evangelicals to listen to those other voices and to learn about how the larger picture—again, of policy, of structural realities, of laws—is impacting the people in your church? I think it is very important.