What is the relationship between spelling and theory? I often tell people my research is about "Hinduism in nineteenth century America." But it's really not. It's not about Hinduism at all. It can't be because the idea of "Hinduism," a world religion comparable to other world religions, isn't invented until the late nineteenth century. That's kind of the point of my research. Most other scholars writing about this period will still use the term "Hindu" to describe the people that Americans or Britons were describing during this period. But when an American missionary or Unitarian pastor refered to the people in India doing something that they recognize as religion they most often used the term "Hindoo." Hindoo--that double O of colonialism.

So, here's the question: Is the difference between Hindoo and Hindu just a matter of spelling? Or is there more going on here?

On the one hand, you could argue that though the sources read Hindoo, it makes sense for the scholar today to write Hindu, even when talking about the 1820s. There are all sorts of terms that we alter when we bring them into the present from the past. No one puts the long S in their scholarly prose, for example. So, maybe Hindoo to Hindu is just like taking that long s out of Congress in the Bill of Rights?

But maybe it's not. It seems to me a Hindu is actually someone quite different from a Hindoo. That is, a Hindu is someone tied up with this world religion called Hinduism. There is the Hindu American Foundation, the Vishwa Hindu Parishad (or World Hindu Council), and the Pew Research Center tallies up the number of "Hindus" in America. But in the early nineteenth century, a Hindoo was a product of the American and British imagination. When I discuss what Americans thought about India and the people who lived there and these things they did that Americans thought were religion, I am not talking about people in South Asia. I'm talking about representations of people in South Asia. These Hindoos are imaginary. "Hindoos" and their religion were invented by Europeans and Americans. During this period, people in India did not present themselves to an American audience. Rather, they were represented by American and European authors to an American audience and in that process they were represented as Hindoos. 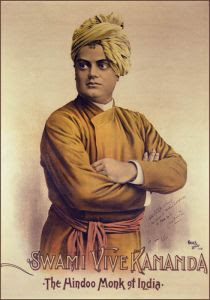 Perhaps the one exception to this would be the Indian reformer Rammohun Roy who wrote in English to an American and British audience. However, Roy self-identified as a "Hindoo," as in his work "A Defence of Hindoo Theism." Even as late as the 1893 World's Parliament of Religions, Americans represented Swami Vivekananda, the South Asian who garnered an audience throughout America, as a "Hindoo Monk." Vivekananda and Rammohun Roy served as transitional figures as Hindoos became Hindus. That is, as South Asians went from imagined representations to immigrants representing themselves in American culture. In 1893 Vivekananda was a "Hindoo monk" but by 1930 he is part of a "Hindu Movement" in Wendell Thomas's book Hinduism Invades America. Vivekananda goes from Hindoo to Hindu, from a South Asian represented by Americans in Chicago to the founder of a movement representing itself in America.

Here's the shift from Hindoo to Hindu in one handy Ngram. The lines cross in the year 1884:

For most of my brief career I've fallen back on the term "Hindu religions" to describe whatever it was that Americans and the British were trying to describe in their writing. But I've decided to eject that term from my work going forward because it implies that there is something there that is essentially "Hindu" before someone labels it as such. There is no there there, however. There is only the discourse about whatever people in South Asia seem to be doing to Europeans and Americans. So, I'm going back to Hindoo, colonial Os and all, to emphasize that nothing is "Hindu" or "Hindoo" until someone categorizes it as such. And then, once categorized, my job is to unpack the conflicts, arguments, ideologies, claims, and competitions behind that categorization. But I am curious to hear from others on this question--and similar questions about, say, "evangelical" or other such categories. Is this all simply a word game?
Email Post
Labels: Hindoo Hindu hinduism michael altman's posts spelling Vivekananda

Carol Faulkner said…
This is a great post! I wish I had your analysis when looking at Mott and other Quakers who used the term (sometimes in an anti-evangelical, anti-colonial way, but still).
September 2, 2014 at 2:25 PM

Matthew Cressler said…
What a great post! Thanks for this Michael. I've already forwarded it to my class (on theory in the study of religion), where it really resonates with our ongoing conversation about the "invention of religion." There's a lot here to think about in terms of the relationship between representation and reality - I hope we get a chance to chat more at length at some point. I definitely see direct connections to my work on African Americans and "black religion/s."
September 3, 2014 at 9:13 AM

Matthew, we should definitely talk soon. I've been beating this drum for a while now, but I think the field of religion in America needs to start asking more questions about representation, invention, and construction. Furthermore, I think these questions apply to not only our sources but our scholarship and the field itself.
September 3, 2014 at 10:38 AM

Paul Harvey said…
Mike: fascinating post, something I had wondered about from time to time myself. How would you argue this re: various spellings of "Moslem/Moslim/Muslim/Musselman" and other variants that show up in 17th/18th/19th century English language sources before the spelling gets regularized. Islam was not a 19th century invention in the way that Hinduism was, but obviously people were thinking of particular constructions of it. Any thoughts?
September 3, 2014 at 1:54 PM

John G. Turner said…
Your post helped me as I was working on an introductory lecture about Hinduism this week (I need a lot of help!).

Michael J. Altman said…
Paul, that's a really good question. I don't have a good answer. A hypothesis that someone might easily prove me wrong about: that shifting constructions of Islam by Europeans are reflected in word choice. So Mohammedan emphasizes the prophet, while Musselman might be more a ethnic/national label, etc. But that's a shot in the dark.

Elesha said…
With Muslim - Mohammedan - Musselman there might be something as sophisticated as "construction of religion" going on, but there also seems to be more prosaic differences in translation, reliance on different (translated) sources, and regional variation (both in the region being described and in the region of the person doing the describing). All sorts of different terms are used in this 1926 special issue of The Muslim World, the full text of which I unfortunately can't access: http://onlinelibrary.wiley.com/doi/10.1111/muwo.1926.16.issue-4/issuetoc. I'd really like to read "The Quest of the Historical Mohammed" and "A Mohammedan View of Islam and Christianity."
September 4, 2014 at 3:12 PM

Robert Mathiesen said…
One should consider this matter in light of the changing professional standards for converting all Sanskrit or Hindi words, as written in Devanagri script, into the English alphabet. Since in English “oo” and “u” have somewhat different pronunciations in many contexts (/uw/ versus /juw/ or /jiw/ or/iw/) the two possible spellings are not phonetically equivalent. At one time English “oo” (and “ee”) were thought — for English readers! — to be a better fit to the Sanskrit and Hindi vowel sounds in question. Later on, linguists were were unwilling in principle to let a sequence of symbols stand for a simple vowel in their phonetic and phonemic analyses, even if the resulting transcriptions (with “u” and “i”) misled naive monoglot English readers. — The different connotations that the two spellings now have cannot have developed until both spellings were in competition with one another.
September 4, 2014 at 5:38 PM