Today I hope to call your attention to two books -- one older (published 2000) and one just out now – for the simple reason that I heart both of them; they are both about hell; and they are both fun as hell to read. The first is Edward L. Bond's Damned Souls in a Tobacco Colony (published in 2000); the second, just out with Oxford, is Kathryn Gin Lum (aka, The Notorious KGL),  Damned Nation: Hell in America from the Revolution to Reconstruction. 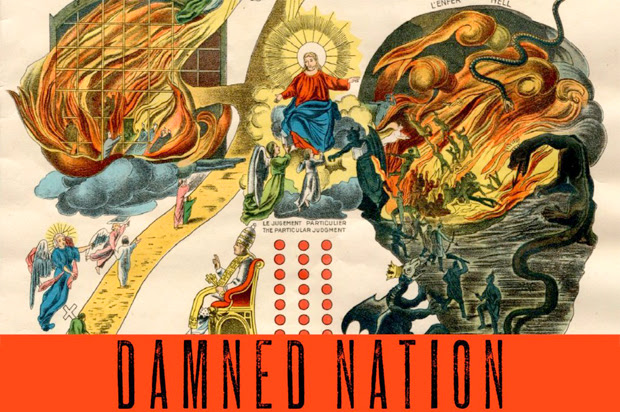 Edward L. Bond’s study Damned Souls in a Tobacco Colony (Mercer University Press, 2000), is one of those books that takes a fresh approach to a subject (in this case, emphasizing the strength of religiosity in seventeenth-century Virginia, contrary to how the usual accounts go) and supports that approach with a wealth of primary source research that will keep you returning to the footnotes for years. I came to appreciate that latter fact more this summer as I worked through my ideas about religion in early Virginia, and returned time and again for help to the primary sources listed in the footnotes from Bond’s book, as well as Rebecca Goetz’s The Baptism of Early Virginia – two books that are pursuing different subjects and arguments, but ultimately work in tandem.

You can find a helpful summary/review here. The main point I would stress in this post is the book’s tracing of how the “damned souls” in the wretched, violent, starving early years of Virginia eventually were compelled to create a colony with both de facto religious toleration and both de facto and de jure racial proscriptions (including the famous 1667 and 1705 laws limiting the meaning of baptism for slaves and differentiating punishments for freemen, servants, and slaves).

The book thus traces the evolution from, let us say, Hugh Pryse, the colonist who in the starving winter of 1609-10 (allegedly, according to a later recollection) cried out “there is no God, “ and was shortly thereafter killed by Indians and his corpse ripped apart by the “wylde beasts,” to James Blair, the Anglican Commissary in the Colony from the 1680s to 1743. Blair’s serene sermons, full of nautical metaphors about sailing safely into port, give us a picture of how the hell of early Virginia had been tamed into the “cheerful and comfortable faith” for whites of the 18th century -- an allusion there to another wonderful book about home-centered white Anglican rituals in the eighteenth century, that by Lauren Winner. I also loved the analysis in Rebecca Goetz's book (maybe in Bond's too, I can't remember now) to how Blair quickly figured out that his interests lay with the planter elite, so that when the Society for the Propagation of the Gospel in Foreign Parts sent over their propaganda about evangelizing slaves and Indians, Blair ignored it. He stowed the material away in his attic, evidently, and upon his death all of those imploring SPG letters and pamphlets and books were found sitting there, unused, and unread, fouled by the hellish scent of dead rodents, and cat urine.

Eighteenth-century Virginia was, of course, neither cheerful or comfortable for the majority of people living in the region – lower-class whites, slaves, and Indians – and that "fresh hell" is the part of the story that Rebecca Goetz picks up on so well. If early Virginia represented one version of a hell in America that was tamed towards larger ends, Kathryn Gin Lum’s new book

Damned Nation traces ideas of hell (more explicitly here) from the revolution to Reconstruction, and does so in a way that delights and instructs. The work goes widely and deeply into the sources of that era to recapture the American dialogue on the meaning of evil and of hell, and suggests how and why concepts of hell survived the enlightenment and the nineteenth-century move towards a “softer” evangelicalism, and served as a central metaphor for nation-building over the first century from the revolution through the Civil War. The blurb from Peter Thuesen captures the thrust of the work very nicely:

"Kathryn Gin Lum shows that the idea of hell, far from withering away under the weight of Enlightenment rationalism, was a fixture of the antebellum religious marketplace-a doctrine calculated to win converts both through attraction and aversion. Americans took the notion of eternal hell torments with deadly seriousness, and Gin Lum reveals just how central the doctrine was. An essential and compelling account."

Rather than going into lengthy review here, let me just point you to a few resources which will give you a good sampling of the arguments and some discussion and dialogue that already has gone on. I suggest starting here, with a short interview with the author. Then, a small portion of the book is helpfully excerpted at Salon here, and an account of one dialogue with an audience about the book may be found here. Finally, broadening the scope of the book just a bit, KGL takes on the question of why hell has survived so long – here. All of this suggests that we may be seeing the workings of the Damned Nation Industrial Complex. Can a review by the geniuses at The Economist about how the hell of slavery was actually kind of swell be far behind? Satan himself could not devise a more effective promotional strategy.

I should add: as a Berkeley alum myself, and reflecting upon KGL's status as an alum and now professor at Stanford, I have decided that her appellation henceforth should be "Damned Cardinal."
Email Post
Labels: hell kathryn Gin Lum religion and politics religion and the environment religion in colonial America religion in the early republic theology virginia