Rachel Hope Cleves's marvelous book Charity and Sylvia: A Same-Sex Marriage in Early America is a dual biography of two women who lived together in Weybridge, Vermont, for forty-four years. Their relatives and neighbors recognized them as married in practice if not by law, with Charity's nephew William Cullen Bryant describing their connection as "no less sacred to them than the tie of 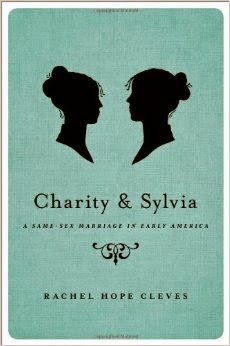 marriage." Demonstrating that toleration of same-sex marriage is not a recent historical development, Cleves attributes recognition of their union to the rural and frontier status of their community, and to the women's important economic and religious contributions to the town. As Cleves argues, however, this toleration depended on "a strategic silencing" of their sexual relationship. Rejecting this silence, Cleves explores both the public and intimate aspects of their marriage. Students of American religious history will be interested in how Charity and Sylvia, as pious women in the early nineteenth century, struggled with what they perceived as sin.

Cleves traces the backgrounds and marriage of Charity Bryant and Sylvia Drake in remarkable detail, piecing together town histories, family papers, their poems, and what remains of their correspondence (unsurprisingly, much was destroyed). When the couple met in 1807, Charity was 29, seven years older than Sylvia. Charity had several previous relationships with other women, but she and Sylvia quickly became inseparable. They moved in together, on property rented from a widowed female landlord, and supported themselves as tailors. At first, and for their relatives' sake, Sylvia was Charity's "assistant." Soon, the two women became equal partners, jointly running their business, and owning their house and personal property. In public records, Charity's name often appeared above Sylvia's, establishing her civic identity as the husband of the relationship, a household order that their neighbors understood. The couple shared a bed, a fact that would have been clear to early visitors to their one-room house, but they later built additions, establishing some privacy and upholding the community's reticence about their sex lives.


According to Cleves, the acceptance of this same-sex marriage depended on the status of the two women. As tailors, Charity and Sylvia had a skill that citizens of Weybridge needed. Throughout Charity's life, business was steady, and the women often sewed long past midnight to keep up with demand. In addition to achieving financial independence, they offered a livelihood to other young women, taking them in for periods of weeks, months, or years, as apprentices and assistants. Relatives and townspeople also valued Charity and Sylvia for their moral leadership. The couple befriended Weybridge's Congregational ministers, often corresponding with them long after they left the area. While Sylvia taught Sunday school, and attended church regularly, Charity joined the church after a conversion experience in 1811. Both women were members of the Weybridge's First Ecclesiastical Society and the Female Benevolent Society. In other words, Charity and Sylvia were mainstays of the community.

Even with Charity's sometimes spotty church attendance, Cleves emphasizes the couple's piety as key to their reputation. Like other members of their Congregational church, they saw themselves as repentant sinners.  Rather than distinguishing them from their neighbors, then, their battle with sin united them with other devout Christians. And it was their struggle to overcome sin, Cleves writes, that offers the "best textual evidence of their erotic relationship." Suggesting that they saw their sins as sexual, Charity and Sylvia used terms such as "wild affections" "unclean" "fleshly appetites" and "sodomites" to characterize their transgressions. Convinced of their sinfulness, the two women tried (and failed) to remain chaste in their shared bed. Their faith, like their physical love, was an important bond between the women.  Together, they prayed for forgiveness, imagining themselves united by Christ's love in Heaven. In this history of the earthly union of Charity and Sylvia, Cleves uncovers how a faith community not only tolerated, but supported a same-sex marriage.