Today's guest post is written by David S. Walsh. David is a doctoral candidate in Anthropology of Religion at Arizona State University. He has lived, worked, and shared in the foodways of the Tłįchǫ Dene in the Northwest Territories, Canada, since 2011. He has conducted ethnographic research on Dene worldviews, foodways, religion, and relationships with nature. Today, David reviews Religion, Food, and Eating in North America (Columbia, 2014), a book first previewed by Paul here at RiAH. David gives us more insight on the book's strengths, its weaknesses, and how we might use it in the classroom. 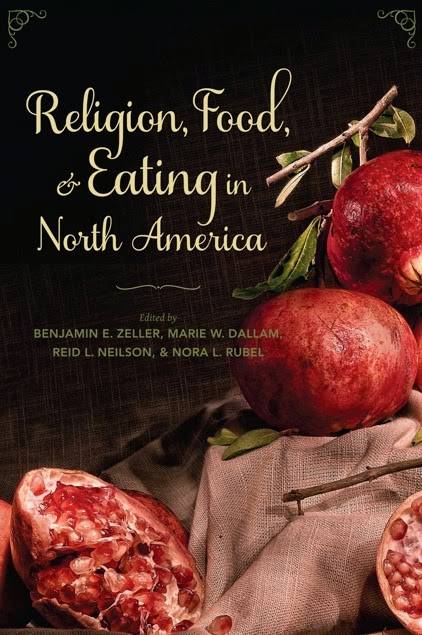 Those in search of a fruitful and, dare I say, tasty collection of essays on religion and food are promised satiation for their hunger in the book Religion, Food, and Eating in North America, edited by Benjamin E. Zeller, Marie W. Dallam, Reid L. Neilson, and Nora L. Rubel. The editors have drawn from a diverse range of traditions, topics, and approaches to the study of religion and food, weaving together a ground breaking collection that frees us from the traditional studies of prohibitions and taboos, and reveals the importance of privileging food in the classroom, in research, and in our very understanding of what is religion in North America.

I was first introduced to this book by Samira Mehta at the fantastic Donner Symposium on Religion and Food in Turku, Finland (see Samira’s post). Samira contributed a thoughtful, accessible, and fun chapter to the book on food as a conduit for blending Jewish and Christian traditions in mixed families. Ben Zeller, an editor of the collection, gave a thoroughly engaging keynote at the symposium that reflected his chapter contribution on quasi-religious food movements among vegans and locavors (see Zeller’s interview).

I was inspired in my own work by the combination of the symposium on Religion and Food, followed closely by reading Religion, Food, and Eating in North America, to understand food as an overlooked but highly influential factor for religion in North America. Since this is my first time on the blog, I should say that I am currently writing a dissertation (if my advisor asks, yes I’m working on it) on the indigenous Dene of northern Canada and their spiritual relationships with caribou. I ask how an analysis through foodways and the necessity of sustenance may alter the ways we understand indigenous relationships with nature: what does it mean when the primary motivation for spiritual, ritualistic acts is not to commune with the divine, nor for a sense of identity, but for survival and the basic need to eat? I have found some answers to my questions in Religion, Food, and Eating in North America; specifically in how the book frames food as central to religious traditions, and food as a common denominator that permeates across religions.

The strength of this book lies in grounding its study of religion in the material object of food, allowing for a large scope while maintaining focus. There are four sections, each comprised of multiple essays. First, "Theological Foodways" combines essays on, “religious mandates for the physical practices of eating and drinking” (Dallam, Introduction, ebook), all pertaining to Christian vegetarianism. Second, "Identity Foodways" focuses on the role of foodways in individual and communal religious identity construction. Third, "Negotiated Foodways" refers to the role of food and foodways in negotiation the practices of lived religion, versus the ideals that religions dictate. Fourth, "Activist Foodways" pertains to the study of people and organizations who promote ethical foodways in fights against injustice, in both public and personal activist forms, being either explicitly religious or a quasi-religious, blurring the lines between food activism and religion. With this range of themes the book reflects the varied foci found in the academy, and the American Academy of Religion conferences from which the collection was formed.

The unique sections of the book allow for diverse approaches to food and religion and therefore draw from an impressive range of traditions within North America, including: Muslim, Jewish, Native American, Buddhist, and various Christian denominations, African American traditions that defy clean categorizations like Lucumí (Santería) in Cuba and folk traditions in Louisiana, even quasi-religious food movements have a place in this collection. The individual chapters are all quite strong, with my personal favorites, reflecting of course my personal academic interests, being “Salmon as Sacrament: First Salmon Ceremonies in the Pacific Northwest” by Suzanne Crawford O’Brien, “The Feast at the End of the Fast: the Evolution of an American Jewish Ritual” by Nora L. Rubel (a co-editor of the book), and “Mindful Eating: American Buddhists and Worldly Benefits” by Jeff Wilson. I suggest these chapters not necessarily because they stand out as superior, but because they offer intriguing and accessible introductions to the study of food and religion for both a scholarly and student readership.

However, the diversity throughout the book has its limitations. There is a lack of scholarship addressing and coming out of Mexico and Canada. As someone whose research is based in Canada, I know that there is great work on religion and food emerging from and about Canada (for those interested in Canadian work on food and religion, some of which is newer and could not have been included in the book, see that of Michel Desjardins, Norma Joseph, Andrea Most, and Aldea Mulhern). The editors address this lack in the introduction, lamenting that it was difficult to find Canadian content. An admission of this omission unfortunately does not make up for the lack, and the “North America” presented in this book is particularly U.S.-centric. Thus, my primary criticism of an otherwise excellent collection of essays, is that the suggested scope of the book does not match the reality.

The book is designed to be used in a classroom, and chapters are followed by two classroom minded additions: study questions and recommended readings. The study questions for some chapters are open and interesting enough to stimulate class discussion, while others read like quiz questions. As a result, the questions may not be equally useful in all classrooms. The recommended reading lists, as distinct from referenced citations, could aid readers interested in learning more about themes from the chapters. These lists could be used creatively in the classroom, for instance assigning students to conduct further research from the recommended readings.

Religion, Food, and Eating in North America draws together a unique collection of essays that, separately and as a whole, impart on the reader a sense of the importance of food as a category of study within religious studies. The book would serve well in an undergrad or grad level course on food and religion, and would be a fun way to engage students in an introductory religions course. The collection would allow students to experience many approaches to the study of religion, and witness religion in a variety of traditions and between traditions, while maintaining a unified theme. This would allow students to think comparatively without relying on the outdated and sometimes ill-fitted categories of religious studies employed too often in introductory courses: gods, dogma, belief, etc. Beyond pedagogical contribution, many of the individual essays contribute in important ways to the study of their specific lived traditions discussed. Despite my minor criticisms, I would highly recommend this collection, and am convinced now more than ever of the importance of food and eating in the study of religion.
Email Post
Labels: religion and food reviews teaching resources