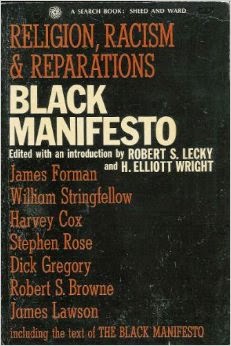 The last several months have seen many thoughtful responses to Ta-Nehisi Coates’s “A Case for Reparations,” published in The Atlantic in late May. Of special interest to readers of RiAH may be a recent roundtable discussion posted at the Society of US Intellectual History blog, as several of the contributions use the famous "Black Manifesto" as a starting point for considering various aspects of the modern reparations debate. I, too, thought of the Black Manifesto as I read and reflected on Coates’s piece, but I did so with the Manifesto’s place in American religious history in mind. In this brief post, I want to consider how the Manifesto, as an event, is often read and included in narratives of twentieth-century American religious history, and to tentatively - and perhaps a bit vaguely - suggest some alternative questions that might be useful in thinking through those narratives. (Because some of the themes I raise here are relevant to my own current research, I hope to comment further on these suggestions in later posts.)

The events surrounding the Black Manifesto are rather well-known. On May 4, 1969, James Forman disrupted Sunday services at New York City’s prestigious Riverside Church, marched to the pulpit, and proceeded to read a long document, the Black Manifesto, to the congregation. Forman ostensibly represented the National Black Economic Development Conference (NBEDC), itself an outgrowth of the ecumenical Interreligious Foundation for Community Organization (IFCO), which had approved the Manifesto only a few weeks earlier. In vivid, even shocking language, the Manifesto demanded 500,000,000 dollars “from the Christian white churches and the Jewish synagogues” and detailed how it was to be spent on a range of programs and services for the black community. Further, it exhorted African Americans to do as Forman had done, and to disrupt religious services across the country in support of the Manifesto’s appeals. And so many did: an interracial group of students occupied the offices of Union Theological Seminary a week later, and several other occupations of various denominational offices followed suit; copies of the Manifesto were distributed to leaders or read to congregations of churches big and small, often by interrupting Sunday services; and the calls for reparations even encouraged other minority groups to appeal to the churches for financial support.


The fervor of the Black Manifesto’s rhetoric and the actions it spurred was matched only by the heated discussions within and between religious groups over what the Manifesto was and how to respond to it. For although many leaders and religious organizations dismissed the Manifesto’s demands without reservation, many others saw the document and the activism it sparked as speaking to a persistent complicity in the various structures of racism on the part of America’s churches and denominations. In this respect, the disruptions associated with the Manifesto intersected with the longer, broader struggles faced by religious groups who sought to engage their institutions and leadership with the key issues of the time. As a result of these conflicts, the controversies that swirled around the Manifesto were hotly debated in religious publications, church and denominational board meetings, and numerous other settings; many of America’s largest religious organizations issued statements addressing the Manifesto and its demands.

Religious historians have most frequently interpreted the Manifesto as a symbol of the ongoing fracturing of the religious establishment, especially of the Protestant mainline, in the late ‘60s and 70s. Divisions over the proper role of churches and larger institutions, such as the National Council of Churches (NCC), in civil rights activism and protests against Vietnam grew increasingly contentious throughout the 1960s. Calls for black power and liberation from both within and from outside of religious institutions pushed religious leaders to reconsider their proper place in debates over race and civil rights, even as anti-war activists challenged the church to clarify or rethink its position on the Vietnam war. The two issues, civil rights and Vietnam, were hardly distinct: some supporters of the Black Manifesto criticized the NCC for giving too much attention to Vietnam.* Nor were they the only issues that the establishment had to address, as the Sixties offered more than its share of challenges to traditions of religious authority, moral conventions, and the general relationship between religion, culture, and politics. The Manifesto, then, often appears as one significant debate amidst an endless series of other, related debates, a symbol of the infighting that ultimately led to the decline of mainline Protestant establishment.

This is a reasonable and useful reading of the Manifesto’s place in American religious history, but there may be other possibilities. By approaching the Black Manifesto in this way, scholars have primarily focused on top-level responses to the Manifesto, especially from the leaders of religious institutions, and have largely slighted two other interrelated aspects of the story: first, the nature of the Manifesto itself and its religious (or non-religious) elements; and second, the grassroots efforts of activists across the nation who took up Forman’s suggestions to pressure churches and synagogues to act on the Manifesto’s demands. Or to phrase the problem in the form of a question, we might stop to ask: why did Forman and the NBEDC choose to target religious institutions, and encourage others to do the same?

These questions are more complicated - and certainly demand more complicated answers - than they might initially appear. Indeed, the origins of the Manifesto are themselves somewhat hazy. Although the Manifesto had its origins in a conference sponsored in part by a prominent ecumenical agency, the IFCO, the passage of the Black Manifesto was achieved by controversial and somewhat dubious means, which involved what Forman called “a seizure of power” of the NBEDC agenda, and a vote on the Manifesto at a time when most of the conference’s members were not present.** According to his autobiography, Forman himself was an atheist long before the writing and announcement of the Manifesto. More importantly, however, the document itself bears no obvious marks of “religious” language; it grounded its demands not in theology or scripture, but instead upon the history of racism and oppression in America, and the church’s relationship to that history. The Black Manifesto did not call specifically on black religious Americans to join the fight for reparations, but rather on all black Americans. Nor did it present itself as speaking on behalf of specifically religious individuals, despite its vaguely religious origins and the support of some black clergy members. Instead, the Manifesto reads as a demand directed toward religious institutions from an ambiguous point, potentially a point outside of that world.***

The Manifesto, then, is an appeal to the power, wealth, and history of America's white religious organizations. Following this line of thought, we might use the Manifesto as a means of exploring perceptions of power, and particularly perceptions of the power of religious institutions, in the late 1960s and 1970s. If organizations like the NCC and the churches they represented were being torn apart by arguments from within and losing members at an accelerating rate, religious institutions nevertheless continued to occupy a privileged position in the minds of many American, including activists of many stripes. (Privileged, of course, does not necessarily mean a position deemed either absolutely positive or absolutely negative, but rather a position of apparent social or political import.) After all, the Manifesto was not the only example of activists placing demands on America’s religious institutions in the late 1960s. Jill Gill, for instance, highlights the multiple groups that showed up to disrupt, demonstrate, or speak at the National Council of Church’s 1969 General Assembly (including the NBEDC and James Forman), representing a range of issues from race and reparations, to anti-war and draft resistance efforts, to the concerns of other minority movements. Even the Yippies made an appearance.****

Historians have frequently paid more attention to the effects of such activism, the responses provoked, than the nature of the demands themselves. Recognizing such appeals pushes scholars to deal with a difficult paradox: even as demands for religious institutions to address issues of race or Vietnam provided more fuel for internal fires within institutions, and even as they could be deeply critical of those institutions as nodes of social power and of their histories, they simultaneously recognized, by the very trajectory of their appeal, a certain position or even social role for the very organizations that were being criticized. In other words, the Black Manifesto and other appeals to religious organizations may offer a window into the way that religious institutions were perceived, and perhaps even prospective roles envisioned for religious groups, in an undoubtedly tumultuous time.

There are certainly other related paths to explore, including - following Matthew Cressler’s excellent recent posts here and here - the relationship of the Black Manifesto and its black clergy cosignatories to Black Power’s religious elements. Working to incorporate religious discussions concerning the Manifesto into the larger historical debate regarding reparations is also a topic worthy of further study. The Black Manifesto has certainly earned its recurring appearances in the dominant narratives of mid-twentieth century American religion, but there are still many approaches and perspectives to be considered by scholars of the period.

** Details concerning the origins of the Black Manifesto vary slightly from source to source, and there was a debate in the wake of the Manifesto concerning the relationship of the Manifesto to the IFCO, and Forman's status as a representative of various organizations. In his autobiography, The Making of Black Revolutionaries, Forman comments that "... we decided that the only way to make this conference relevant was to take it over completely[...]" (Forman, Making of Black Revolutionaries, 545). The "seizure of power" quote is included in Arnold Schuchter's Reparations: The Black Manifesto and Its Challenge to White America, 4.

*** Forman's own reasons for targeting religious institutions, at least as expounded in his autobiography, included the church's historical and present relationship to slavery and racism around the world, his own negative experiences with the church growing up, and the fact that the NBEDC was initially organized "by 'Christians'." More intriguing than Forman's own rationale, however, might be the question of how activist groups that took up the charge of the Black Manifesto at a local level interpreted the targeting of religious institutions.

Matthew Cressler said…
Thanks for this great post, Trevor! I love the way you situate (and resituate) the Manifesto, particularly in regard to religious institutions and the history of racism. I will be teaching Coates and the Manifesto this fall - I'll have to let you know what my students have to say!
August 6, 2014 at 11:09 AM

Matthew Cressler said…
I also love your commentary on the relative "religious-ness" of the document itself. Black atheists are one of the most persistent absences in African American history, most especially in regard to the long civil rights era!
August 6, 2014 at 11:20 AM

Trevor Burrows said…
Thanks, Matthew - I appreciate the comments. I was actually quite stunned to learn of Forman's atheism as I returned to the Manifesto a little while back. I had long assumed (for no legitimate reason) that he either considered himself religious or indifferent. It made me read the document in a new light, and definitely sparked some new questions.

In what context are you teaching the Manifesto? Such a provocative document is certain to get students talking.
August 7, 2014 at 7:41 PM