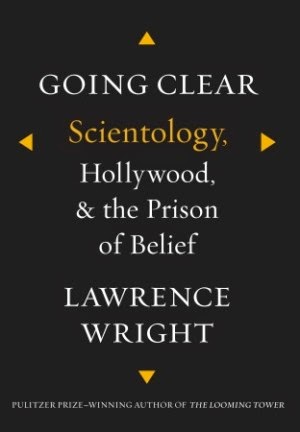 One of the joys of summer for me is the possibility of reading a few things outside of my immediate academic specialty. Even if (when) I don't make it through everything I would like, I always feel like I've discovered some rejuvenating things of interest.

To that end, one of the highlights of my summer 2014 reading has been the not-quite-new book by Lawrence Wright, Going Clear: Scientology, Hollywood, & the Prison of Belief.

When Baylor graduate student Adina Johnson first recommended the book to me, I was skeptical. Could an author really present Scientology in an interesting way?

I shouldn't have been so suspicious. I already knew Wright had outstanding skills in investigative journalism, getting extensive insights through personal interviews, and communicating through compelling prose. All of these skills were on display in his earlier book The Looming Tower: Al-Qaeda and the Road to 9/11, a book which to my mind is indispensable in understanding and historicizing September 11, 2001.

All of those skills were on display in Going Clear. I had somehow missed its publication last year and the fact that it had been named to a number of year-end "best of " lists (such as here, but also including being a National Book Award Finalist and being honored by the Washington Post, the Boston Globe, and the Chicago Tribune).

The subtitle actually provides a rough outline of the book. The first section gives a detailed account of L. Ron Hubbard's life and creation of the books and ideas supporting Scientology. Hubbard's life might charitably be called "tumultuous." Wright describes violent and dysfunctional personal relationships and suggests that many claims Hubbard made about himself were fabricated. Wright also does a decent job of limning Scientology's beliefs. The movement uses invented terms and loves acronyms, and Wright translates them helpfully.

Wright communicates the structure of beliefs fairly, but here I would have liked to have seen more description. I wanted to hear, not only what was believed, but how it was received and how those beliefs structured a larger world. The one thing I felt the book lacked was an explanation of the appeal to converts and members. What and why did the movement's teaching resonate?

The second section describes the movement's development and institutional flourishing. Although Hubbard led the organization from a small naval flotilla that cruised the Mediterranean for several years (forming the Sea Organization or "Sea Org"), the executive leadership eventually settled back into America and began building significant nodes of influence, first in Florida but primarily in Southern California. This organization-building was helped by the millions of dollars which flowed into the organization and which were controlled by the inner circle of leadership. Acolytes paid for every course to bring them further along the "Bridge to Total Freedom." This led to great wealth and power at the top of the organization. After Hubbard's death, control was assumed by a young aide to Hubbard, David Miscavige.

Influence also grew as Scientology developed networks in the acting community. Scientology offered promises of help and a competitive advantage in Hollywood. This section detailed the recruitment and deployment of such celebrities as John Travolta and Tom Cruise. (Wright had earlier written about Scientology through the lens of a Hollywood writer who had left the movement, Paul Haggis). This section proved useful to me in understanding how and why various Scientology appeals have emanated from Hollywood figures.

The third section details the challenges of those trying to leave the movement. It became difficult for those deeply committed to separate themselves from the organization. Sometimes this was a literal difficulty: individuals found themselves physically restrained within group buildings. Other times, it was the long-term influence of sets of beliefs, coupled with tight social networks that did not include any non-Scientologists. Either way, Wright shows the obstacles to leaving such an insular movement.

Wright should be commended for his fair reporting. Wright details how he and his team of fact-checkers went over every claim made in the book to make sure it was defensible. He also met with Scientology spokespeople and gave them ample opportunity to respond, which they did with reams of documents. (For another example of Scientology's pugnacious defense of itself, you might find interesting David Miscavige's appearance on Nightline with Ted Koppel). Wright carefully notes the organization's claims and denials. The pages are littered with footnotes where the group denies claims Wright makes--an exercise in fairness that also provokes chuckles after awhile.

The significant question that Wright is proposing throughout the book is how religious movements can be defined and differentiated. Clearly Scientology is operating as a business enterprise for its leadership. Also, there are many confirmed accounts of harsh treatment, both physical and psychological. Yet, it does have some religious components. Should a movement with questionable teachings, no historic pedigree, and a record of abuse (including child abuse) be simply accorded the umbrella designation of a religion?

I leave that question for our readers--especially scholars of New Religious Movements--to hash out in the comments section.

For me, I can only report that I found the book compelling and well worth being part of my summer reading.
Email Post
Labels: new religious movements scientology

Tom Van Dyke said…
As a denizen of LA, my experience with Scientologists doesn't really fit into the formal boxes we've prepared for religion.

Many or most I've known are probably like today's nominal Christians--neither willing to defend it chapter or verse in any vulnerable respect but not disposed to speak ill of it either--and when push comes to shove, think of it not just as a positive influence, but a sustaining one.

As for the True Believers [Sea Org, etc.] and their tactics against Suppressive Persons, the Fair Game principle, etc., that's all quite sensational and I don't doubt it's true, but in my experience the rank and file tend to take the good and leave the bad, and ignore the rest.

BTW, I once worked in a place where the owner also stored his Scientology texts, up to quite a high level including the esoteric Xenu stuff.

All rather banal, actually, and I've never met a Scientologist who bought into it, just like I imagine there are few NoI folks who actually believe white people were created by the evil scientist Yakub.