Kate Carté Engel is an Associate Professor of Religious Studies at Southern Methodist University.  Her areas of expertise include early American history and religion in the Atlantic world.

Readers of the blog will likely be familiar with her 2009 book, Religion and Profit: Moravians in Early America (University of Pennsylvannia Press), which garnered high praise from reviewers and won the 2010 Dale W. Brown Award for Outstanding Scholarship in Anabaptist and Pietist Studies. Engel has also published in journals such as Church History and Early American Studies. Her current book project is titled The Cause of True Religion. It will be looking at the American Revolution in connection with transatlantic Protestant networks in North America, Britain, and Europe.

Kate Carte Engel: My first academic love was early America, because it combined the best of all the historical worlds I wanted to explore.  It’s a field where, if you go from origins to consequences, you can think expansively from medieval Europe and pre-Columbian North America through to the present day United States.  Eighteenth-century North America can be the pivot around which so much history rotates.

When I started, I was fascinated by debates about the “transition” to capitalism in early America.  There was a lot of discussion of a “moral economy,” and I wanted to understand how religion fit into those arguments.  That led met to my first book, Religion and Profit, which tried to get beyond macro-economic arguments about a transition to look at how religious choices informed daily market choices against the backdrop of dramatic cultural, political, and economic change that all eighteenth-century Americans experienced.

Once I started studying some of the incredibly diverse things that fall under the category of religion, I was hooked by the amazing and persuasive stories.  For me, studying the history of religion amount to studying what mattered most to people—how they understood their relationships and their own actions as right or wrong.  As so many people know from reading Jon Sensbach’s book, Rebecca’s Revival, the Moravians kept amazing records.  One of the people who has really stuck in with me is a man named Digeon, a mentally-disabled man who was among Bethlehem, Pennsylvania’s first residents.  Though its early decades, as Bethlehem’s leaders were contemplating how and why they should make various investments, or send out missionaries to some particular place, they were also dealing with the reality that people had very different abilities to contribute to the economy.  Some people needed help, or care, others needed discipline.  Following how they treated Digeon kept reminding me to think of my historical subjects as real people, and not as an accumulation of abstract historical forces. 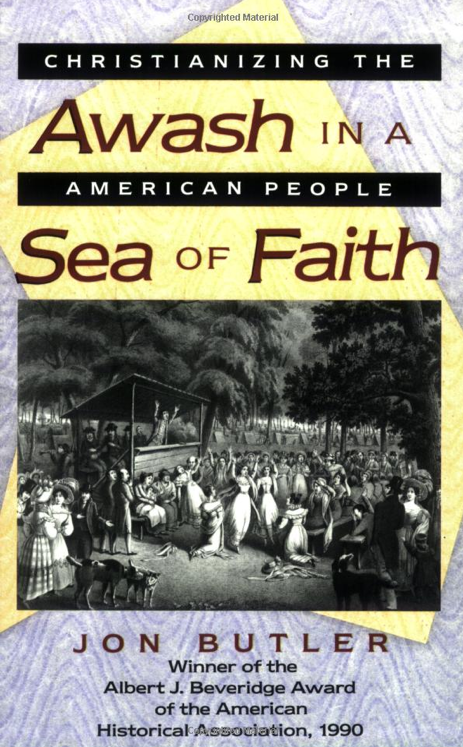 Engel: Maybe we all think this, but I was in graduate school at a really interesting moment in the study of early American Religion.  Jon Butler’s Awash in a Sea of Faith, Jack Greene’s Pursuits of Happiness, and Christine Heyrman’s Southern Cross had recently been published and the cumulative effect of those works was to focus attention away from the Puritans and away from a narrative of progressive religious decline that had long dominated the field.  Charles Cohen, my advisor, published his article on the “post-puritan paradigm,” while I was a student, in which he argued that “Christianization” was a better way to understand the trajectory of early American religion.  The cumulative force of those works, along with the creative scholarship that people like David Hall, in his World of Wonders, and John Brooke (Refiner’s Fire) and Gregory Dowd (A Spirited Resistance) were already doing, opened up new kinds of territory for subsequent generations of scholars.  Recent works on Native Christianities, such those by Rachel Wheeler and Linford Fisher, as well as on the religion of the southern colonies, and I’m thinking here of Rebecca Goetz and Lauren Winner, have their antecedents of course, but bring really fresh perspectives as well.

At the same time that the field feels intellectually much larger than it did when I was in graduate school, religious history has, I think, benefitted from the wider trend in the historical profession to pay more attention to religion.  History and politics has attracted a great deal of attention, whether that’s early modern imperial religious cooperation or the rise (and plateau) of the religious right in our current era.  The important question that seems pressing now is to figure out how and through what mechanisms different things we put under the rubric of religion influenced politics.

Engel: “Inform” is the perfect verb.  On one hand, a lot (though by no means all) of religious studies theory is concerned primarily with understanding the place of religion in the world we live in, and it can be pretty awkward to read those theories back into past centuries, whether because of changes in what religion has meant over time or because of the limitations of our sources.  On the other hand, theoretical work has done a wonderful job of developing more precise ways of differentiating the various components of religion.  Reading (good) theoretical treatments of religion feels a lot like watching a virtuoso ballet performance.  It’s the humanities version of fine art, and it can be an aesthetically stimulating way to find new ideas and show our subjects in a new light.

I should add, though, that I think there’s still a lot of room to communicate the vitality of theories and approaches to religion to historians who are centrally concerned with other matters.  I was struck recently by Russell McCutcheon’s blog post that notes how common it is today to find scholars working on the historicity of the category of religion and its invention during the early modern era.
(See!  All things pivot around the early modern era!)  Yet I don’t think that the sheer power of that intellectual moment is recognized by most early Americanists, let alone the political and cultural complexity of the process.  In that sense, the thoughtful work done by people like McCutcheon has not yet informed the historical field enough.

Stephens: What project(s) are you working on currently?

Engel: I’m writing an international religious history of the American Revolution.   It was a bloody war within an empire that defined itself as Protestant, and one side used the help of the Catholic French.  I’m looking at how the war—a series of escalating conflicts that culminated in years of bloodshed—changed the way Protestants within and beyond the British empire thought of their relationships to one another.

Historians have long depicted Protestantism in transatlantic terms, but I think we’ve dramatically underestimated the significance of the war to religious community.  The war ruptured most of the networks that functioned in the colonial era, so it’s a tale first of endings and then of new, and different, beginnings.  I’ve had a wonderful time over the past few years chasing down correspondence by people like Ezra Stiles, John Erskine, Johann Urlsperger, Jonathan Boucher, John Witherspoon, and the Countess of Huntingdon.  The war pushed these folks, the leaders of religious institutions, to articulate how and why international conflict happened, and what they should do about it.    Although most of those are not household names, what they thought mattered a great deal, because while they were protecting their communities from moral stain, they were also defining, for political leaders, what kind of voice “religion” should have in the public sphere.  In other words, international religious community turns out to be a key context for American religious culture.

This project has wonderful stories too.  From perennially whiny missionaries, to competitive transatlantic fundraising efforts, to crises of conscience in the face of violence, war certainly makes for good drama.  It also gestures forward to the present.  How can we ever set aside arguments about whether the United States is a Christian country if we don’t know what the Revolutionary generation thought it meant to be both Christian and in their own, new country?
Email Post
Labels: capitalism early America four questions with historiography kate carté engel randall's posts religion and economics religion and the american revolution religion in colonial America