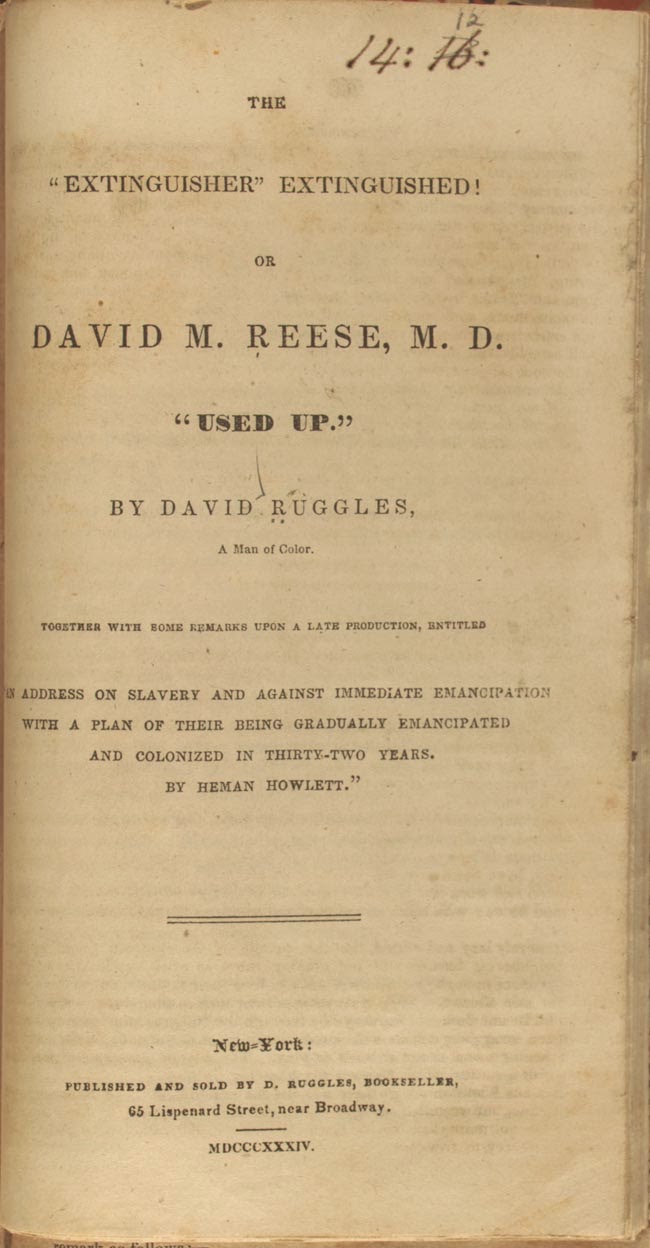 Most readers of this blog will know David Ruggles (1810-1849) as the leader of the New York Committee of Vigilance, and the man who helped Frederick Douglass escape from slavery. Graham Russell Gao Hodges's excellent biography follows Ruggles from his birth in Lyme, Connecticut, to his death in Northampton, Massachusetts, where he ran a Water-Cure establishment. In between, Ruggles was a long-time resident of New York City, making his living as a mariner, shopkeeper, bookseller, printer, journalist, and anti-slavery agent. Hodges describes Ruggles as a practical abolitionist, who not only connected the anti-slavery movement and Underground Railroad, but "worked equally and frequently among male and female abolitionists of both races" (3-4). In 1834, he published an attack on colonization, The "Extinguisher" Extinguished! Or David M. Reese, M.D. "Used Up," which was, Hodges states, "the first time a black New Yorker had his own imprint" (3). I am interested in another pamphlet published by Ruggles, the shockingly named Abrogation of the Seventh Commandment by the American Churches (1835). As the title suggests, Ruggles argued that slavery enabled white men to violate the commandment on adultery without losing their good character, while forcing enslaved men and women to engage in sex outside of marriage. American churches tacitly accepted this sexual order. On the title page, Ruggles is listed as the printer, but the pamphlet is signed "A Puritan." A somewhat odd choice, this label served an important purpose: it established a shared religious and geographic identity with his intended audience of Northern women.

Though Hodges and other scholars name Ruggles as author and publisher of Abrogation, I was surprised to find that authorship is sometimes credited to George Bourne, a white Presbyterian minister and abolitionist. Why? Was this another assumption (as in the case of Harriet Jacobs and Lydia Maria Child) of the impossibility of black authorship? According to some library catalogs, the original attribution of Bourne as author comes from  John W. Christie and Dwight L. Dumond, George Bourne and the Book and Slavery Irreconcilable, published by the Historical Society of Wilmington and the Presbyterian Historical Society in 1969. Bourne's son claimed a great Puritan lineage for him, but his early abolitionist identity was based on his immediate experience as an English immigrant to the United States and as a minister in Virginia. According to Donald Yacovone, author of Bourne's entry in ANB, as early as 1810, Bourne excluded slaveholders from his Harrisonburg congregration, and criticized fellow ministers for owning slaves. By the time Bourne published The Book and Slavery Irreconcilable (1816), he had been disciplined by the Lexington Presbytery and exiled from the south. This did not stop Bourne. One of the founders of the American Anti-Slavery Society, he published A Picture of Slavery in the United States in 1834. Graham Hodges does not mention Bourne in his biography of Ruggles, but Ruggles read A Picture of Slavery, and excerpted  five paragraphs (appropriately credited) to support his argument in Abrogation. He did the same with a paragraph from William Jay's An Inquiry into the Character and Tendency of the American Colonization, and American Anti-Slavery Societies (1835), but Jay is never listed as the author of Abrogation.

All three men wrote during an intense period of abolitionist organizing in the mid-1830s. Historian Carol Lasser points out that reformers used "voyeuristic" and sexualized examples to recruit women to abolition "before the distinctions between men's and women's roles within the movement had been firmly drawn." After the 1830s, such arguments against slavery declined.* As Hodges notes, Ruggles's immediate goal was to reach white women and men in the moral reform (anti-prostitution) movement, and the similarity in rhetoric is striking. For example, Ruggles warned against "false delicacy" on the subject of sexual abuse in slavery, describing the peculiar institution as characterized by "licentiousness of intercourse between the sexes, constant, incestuous, and universal."** Part of a distinctive anti-slavery campaign, Bourne and Ruggles had similar goals, but there is little to suggest Bourne as the author of both pamphlets.

Born in Connecticut, Ruggles had as much right to claim a "Puritan" perspective as any other native New Englander. As a child, he attended a school sponsored by the Congregational Church. When he moved to New York City, he joined the First Colored Presbyterian Church. It is also possible that the pseudonym referred to Puritan laws regulating sexual behavior, but many of these laws existed in southern states as well. Establishing their common heritage, Ruggles addressed Abrogation to his "Fellow Christians," urging readers to use "evangelical weapons" to fight slavery. Like later abolitionist come-outers, Ruggles believed the church, from the pulpit to the pew, condoned slavery.  "The house of prayer," he wrote, "should no longer be the den of thieves and adulterers." Southern ladies were criminal accomplices to this system, so he turned to Northern women, "by the lofty honor of your sex, by your sympathies as women, by your character as wives, mothers, and sisters, and by the imperative claims of ‘pure religion and undefiled.'" Their evangelical weapon? "Not to company with fornicators" (1st Corinthians, v. 9-13). Ruggles recommended two actions. First, female parishioners should sign a protest against the presence of any slaveholder in their church. Second, if their protest was not heeded, and a slave-owning visitor appeared, they should immediately exit the building. He believed their actions would not only purify the northern church, but bring slavery to an end. In contrast to the current invisibility of sexual sins under slavery, Ruggles urged women to use their moral example “to indelibly brand this system of female violation, adultery, incest, bigamy, concubinage, and polygamy…with its own infamous names."

Did Ruggles's pseudonym make a difference? While his pamphlet addressed a topic of personal and political importance to white female abolitionists, they ignored it. Instead, Hodges writes, Ruggles found an enthusiastic audience in African American women organized in uplift and literary societies. As part of a larger campaign, however, An Abrogation of the Seventh Commandment places Ruggles at the center of a movement intent on appealing to Christian women. To overcome differences of race and sex, Ruggles relied on his religious upbringing, which placed him, with whites, in a familiar landscape of American history. Thus linked by their shared New England religion, Ruggles differentiated this true Christianity from the false religion of slaveholders--and challenged them to uphold it.